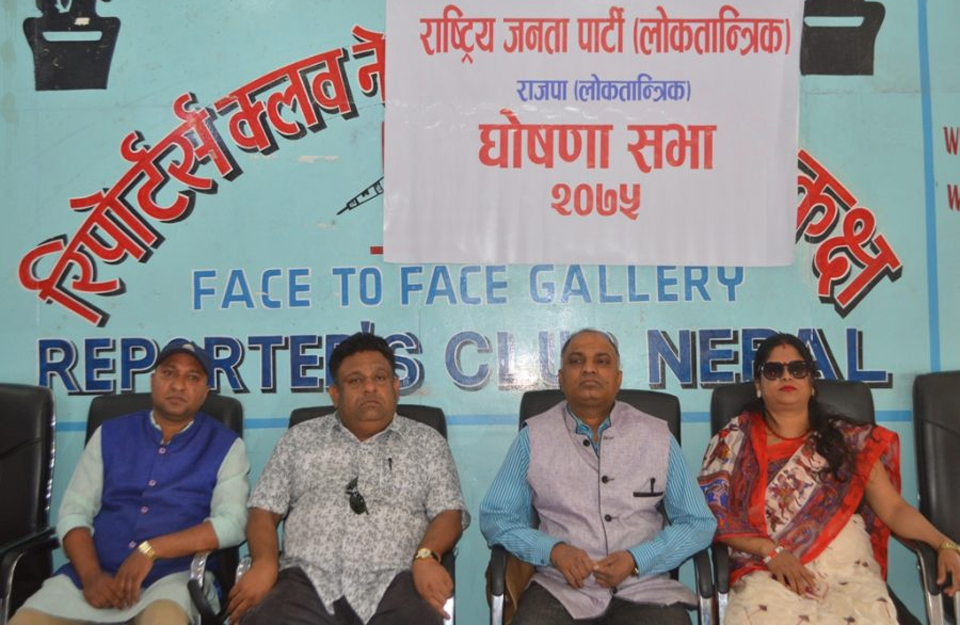 Dissident leaders of RJPN, including Vice-chairman Ashok Kumar Yadav, General Secretary Kadam Rasul Ansari and others announced a new party named RJPN (Democratic), severing ties with the mother party. None of the RJPN members of parliament and provincial assembly members has joined the splinter faction.

“We all invested in and contributed to the establishment of the party and its agenda but the six presidium members only favored their family and near and dear ones whenever an opportunity came,” said treasurer of the new party, Madhumaya Yadav.

Interestingly, Madhumaya is the spouse of the new party's coordinator Ashok Yadav and both were candidates from the RJPN in the parliamentary and local elections, but failed to emerge victoriously. Ashok was a proportional representation candidate from the RJPN and his wife Madhu was a deputy mayor candidate.

According to her, three dozen central leaders of the RJPN joined the new party on Friday and some independent Madhes-based political activists are set to join very soon.

However, RJPN leaders have said that the split of 33 leaders from over 800-member central committee may not affect the party. “The party has over 800 central committee members. So, it cannot provide the desired positions to all central level leaders at once. The decision by some impatient leaders to quit the party may not have a big impact on RJPN,” said presidium member Anil Kumar Jha.

Earlier, key second rung leaders of the RJPN including Hridrayesh Tripathi, Brijesh Gupta including others had quit the RJPN prior to the provincial and parliamentary polls.

KATHMANDU, July 28: The top brass of the ruling Nepal Communist Party (NCP) has been struggling to figure out a... Read More...

KATHMANDU, July 5: Rastriya Janata Party Nepal is all set to register the party at the Election Commission today. ... Read More...

NTB stops rescue operation with the rescue of 1,331 stranded tourists
16 hours ago

Amid lockdown, troubled Indians returning home (with photos and video)
7 hours ago
30 injured in Ramechhap jeep accident
8 hours ago