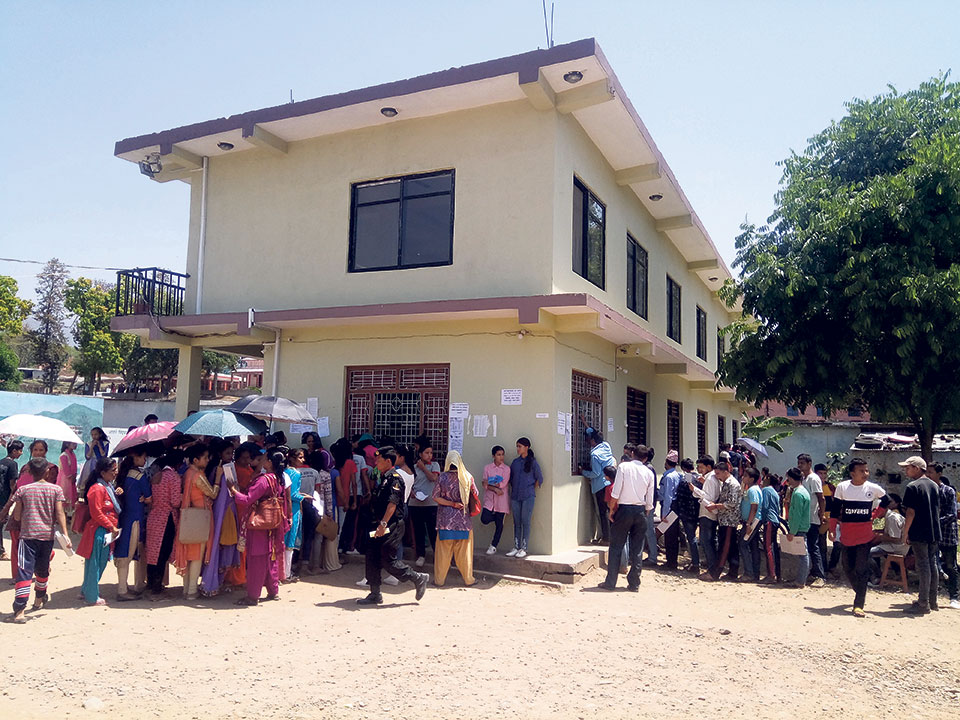 Parents and students who had reached to Jana Secondary School for filling application form for admission.

Similarly, Shaipal Devkota, who was able to score A+ in the final exams from a private school last year, has been admitted to grade 8 in Jana Secondary School (JSS) this year.

"Community schools can provide education no less than boarding schools, so I was shifted here," said Devkota, who was seen on the premises of the school on Wednesday.

Likewise, Sandip Khatri, who was in a boarding school last year, was admitted to grade 9 of Shree Krishna Sanskrit Secondary School (SKSSS) of Birendranagar this year. He says he won't have any kind of problem for his study as SKSSS has classes in both English and Nepali medium.

Until a few years ago, there was a tradition of enrolling children in boarding schools from community schools but now that is slowly changing. This has been possible after a few community schools proved that they are capable of imparting quality education and other services to students.

According to Shrestha, 80 % of the applicants are from boarding schools. "This makes it clear that community schools have been able to woo more number of students these days," he added. Until a few years ago, the number of students was disappointingly low in JSS despite being at the center of Birendranagar. But that has changed, thanks to the infrastructural development and qualified teachers. The school had made it mandatory for the staff to admit their children in community school. High number of students has compelled the school authority to run 23 classes from grade 1 to 10 this year.

Not just JSS but other schools like SKSSS, Amar Jyoti Namuna Secondary School, Neware, Hastabir Basic School among others have similar flow of students. "Every year more number of students are switching from boarding schools to community schools and the rate is increasing significantly," said Dev Gautam, Information officer at SKSSS.

RUKUM, Jan 8: All the community schools in the district have closed down for 15 days after a surge in... Read More...