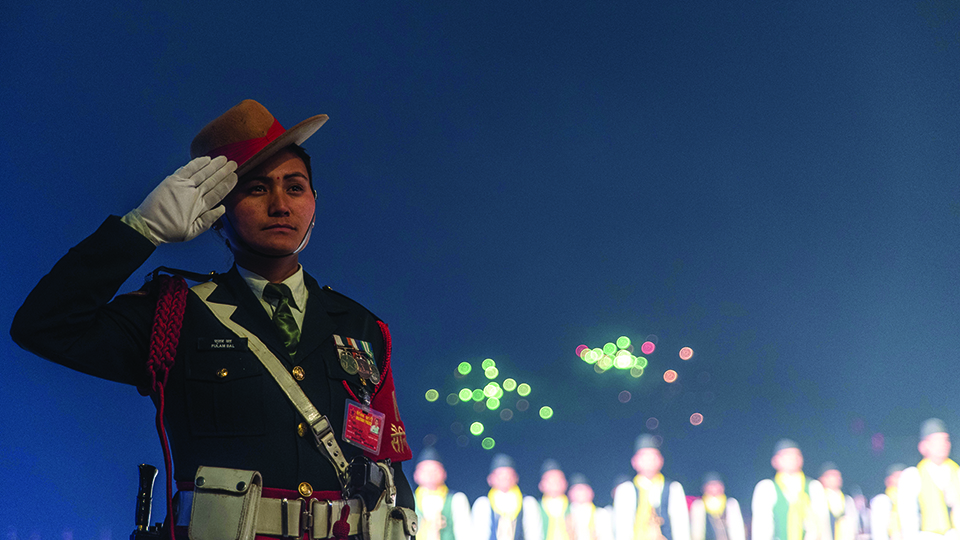 Unified command is an authority in which the role of supreme commander is shared by two or more individuals. Under this, responding agencies and or jurisdictions with responsibility for the incident share incident management. In other words, armed force of two or more services operates under a single commander.

It is the need of modern warfare paradigm globally. All security forces and organs should function in unified command control system in case of crisis or emergency. In Nepal, all four security organs—Nepal Army, Nepal Police, Nepal Armed Police Force and National Investigation Department—should operate joint training both for peace time and war time as preparedness measures though they can operate separate trainings for professional development and capacity building.

During the Maoist insurgency, security forces were mobilized under unified command control system. But after Nepal Army was mobilized formally, some conflicts surfaced due to mismatch of training and nature of work each organ was carrying out. That was the result of policy flaw.  The government must rectify it now.

Unified command should develop various defensive warfare skills as preparedness in case of threat from outside. United Nations Peacekeeping is paramilitary in nature. In this regard, Nepal could conduct unified training centers to reduce their expenditure. Concurrently, arrangement of logistic support from ministries should also go side by side. Ministry of Defense and Home Affairs must not be the sole bodies to arrange national security.

Warfare trainings and techniques our security forces learn from America, Britain, China  and other developed countries help us a little given the difference of geographical terrain and context. Thus the warfare training and logistic support must match with ground realities of Nepal.

Yes, it is always good to gain insights as to how other countries impart warfare training and practice but our security bodies should tailor their trainings and warfare practice according to our geographical make up and economic viability. We need to devise efficient policy of national security to enhance existing warfare skill of security forces.

From the days of King Prithvi Narayan Shah to King Birendra’s time, Nepal Army had arranged to produce essential logistic and weapons which saved us money, but this practice stopped from 1997. We need to revive it.

Some officials within security bodies and Defense and Home Ministry took to importing logistics and weapons from outside for personal gains. This rendered Nepal dependent on India. Thus Nepal Army, Nepal Police and Nepal Armed Police Force should start producing essential logistics so as to gradually move towards making weapons and equipment at home itself.

Maoist combatants have been integrated into Nepal Army. Even their skills of guerilla warfare can be incorporated within the Army. Moreover, the government of Nepal should appoint a security expert a person with expertise on national and international security concerns and challenge as a National Security Adviser of the Prime Minister.

The current practice of keeping Security Council under Defense Secretary with Army and Police as members thereof in Ministry of Defense won’t work well. To function efficiently, Security Council must appoint someone with knowledge and experiences on security practices of the globe.

Needless to say, small country like Nepal with small security strength cannot fight war with its immediate neighbors in case such unfortunate situation arises. But Nepal can delay such prospect by buying time until the case is internationalized and we can appeal for support from the rest of the world including the United Nations.

In case of attack from outside, unified command can hold war at least for three to seven days during which it can call for help from regional and international community to defend Nepal’s territory. The Ministry of Defense should come up with a plan to enhance capacity of security forces and make them more professional.

Then we should go for rightsizing oversized security organs. The surplus budget can be spent on professional capability building for asymmetric warfare. Nepal must not give easy access to American, British, Chinese and Indian security cells within army and police barracks in the name of capacity building and special trainings.

Likewise, Nepal must immediately regulate, by putting up fences if necessary, borders with India and China. This is a universal practice. This will help security forces of both countries to identify the elements operating along the border regions to harm security interests of respective countries.

Unified command enhances the person to person relationship and brotherhood of our security organs and this will reduce superior and inferior complex among those organs. We need to assign those with expertise and experience to consult on security policy matters to include all aspects, rather than those picked or called ‘experts’ by political parties.

There is a tendency in Nepal to be alarmed only when security situation deteriorates.  We become complacent thinking that Nepal is a peaceful country and therefore the situation to mobilize security forces for maintaining peace will never arise. This is an immature thinking. A nation must remain prepared for any kind of contingency—internal and external. Unified command is needed for this reason. We can create it with simple planning and cheap cost.

The author, retired Brigadier General of Nepal Army, has a Master’s Degree in International Security from Cranfield University, UK

KATHMANDU, April 12: Much-anticipated high-level talks between the CPN-UML and CPN (Maoist Center) planned for Tuesday was postponed to Wednesday and... Read More...

KATHMANDU, May 3: Prime Minister Pushpa Kamal Dahal has said the country had moved towards the course of constitution enforcement... Read More...