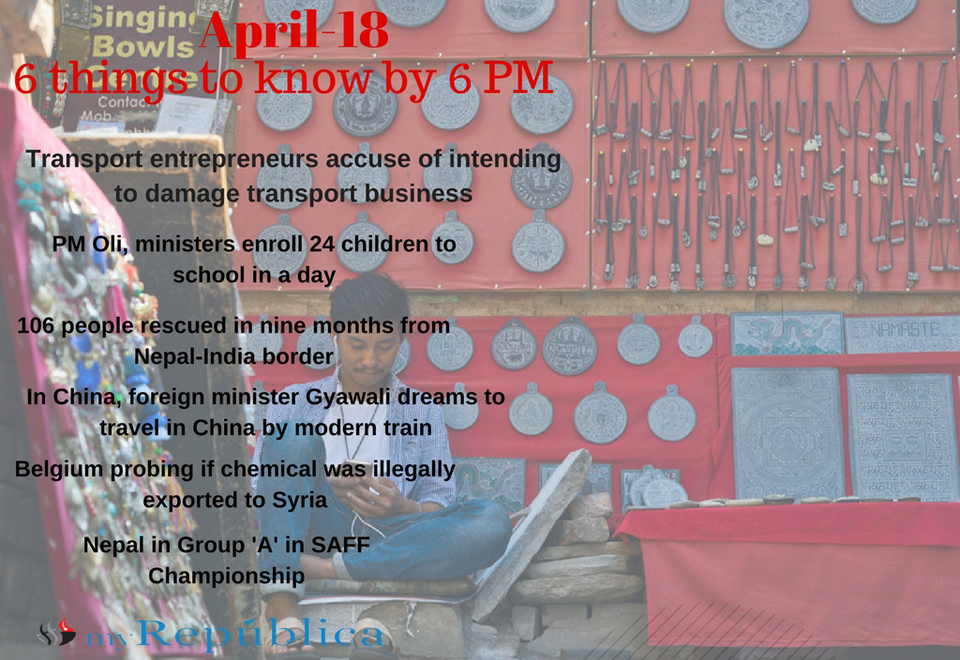 PM Oli, ministers enroll 24 children to school in a day

Prime Minister KP Sharma Oli, Pushpa Kamal Dahal along with other ministers enrolled 24 children in nationwide enrollment campaign today. Oli along with his accompanies enrolled five children in Siraha and Dahal enrolled two in Chitwan. Likewise, Ishwor Pokharel and Yubaraj Khatiwada enrolled one each in Kathmadu while Trilochan Bhatta, chief minister of Province 7 enrolled 12, one of whom is the minister’s daughter. In addition, Dormani Paudel, CM of Province 3 enrolled three children.

Five minor girls were among the 106 people that were rescued by the police in nine months from human trafficking at Jhulaghat of Nepal-India border.  Among those rescued include 56 minor boys, 25 teens, nine males, sixteen girls, five minor girls and five women were rescued during the period.

In a press meet at Beijing, foreign minister Pradeep Kumar Gyawali expressed he dreamt of travelling to China by a modern rail from Nepal. China and Nepal have agreed to a long-term vision for a cross-Himalaya connectivity network, part of China’s Belt and Road Initiative.

Belgium probing if chemical was illegally exported to Syria

Belgian authorities are investigating whether three companies might have been involved in the illegal export of chemicals to Syria. The case against the companies is to come to court on May 15 for opening proceedings and centers on whether the products were exported between 2014 and 2016 despite the sanctions against the regime of President Bashar Assad.

Nepal has been placed in Group A of the 2018 SAFF championship to be held in Bangladesh this September. In Group A, Nepal is paired with host Bangladesh, Pakistan and Bhutan.

An open letter to Ram Narayan Bidari
12 hours ago

Father arrested on charge of raping daughter
22 hours ago

Are we falling prey to the tech world?
11 hours ago