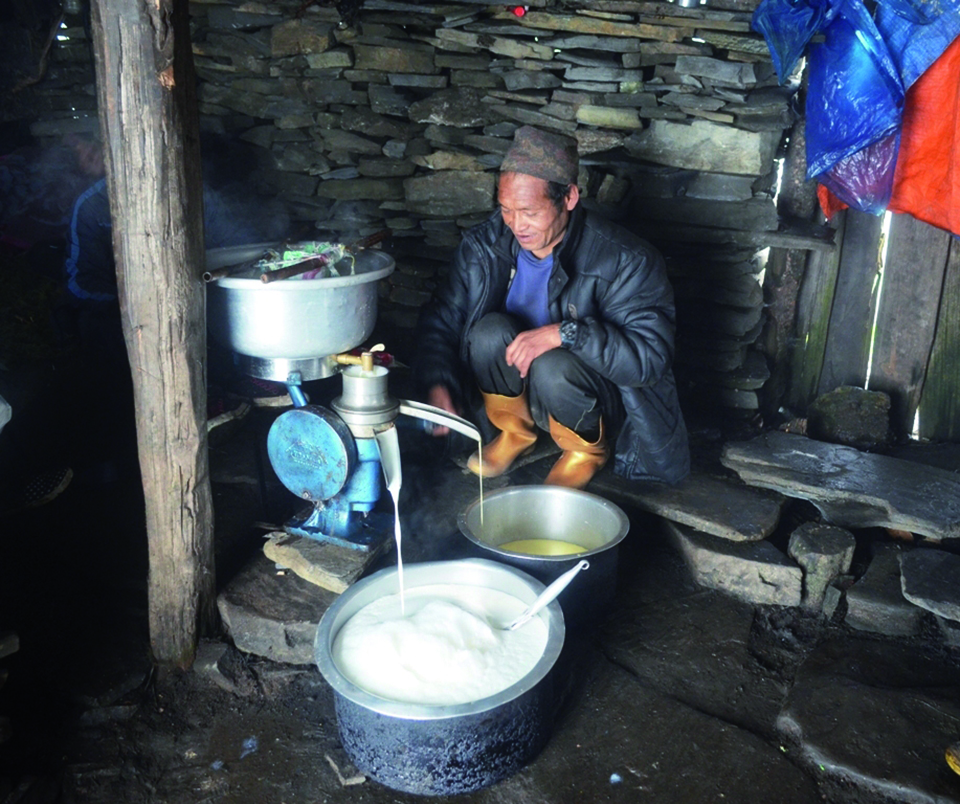 PAANCHTHAR, April 18: Animal husbandry has a long history in high mountainous and hilly regions. However, residents in this region are slowly switching to other professions in recent days, which have resulted in the decline of animal husbandry.

Earlier, every house in the region would have cow, sheep and yak sheds but now only handful of people have such sheds. Though livestock farming has good earning to the farmers, very few people of Paanchthar, Taplejung and Ilam take up this occupation these days. One of the major reasons for the decline is the profession's unpopularity among the new generation.

"Raising livestock was very common in our time but now most of the youths prefer going abroad and doing other kinds of job," said Chabi Lal Rai of Charrate adding, "One can earn well through this profession but youths show no interest in it."

Advancement of technology, modernization and other privileges has made the people more incompetent and lazy, he said adding that the people living in the high altitude areas initially learned this profession from Tibet.

Raj Kumar Rai of Falelung, Sikre, stated that he has been raising livestock to continue the legacy of his ancestors. Raising livestock in the high mountainous regions is challenging and the youths who can lead life with fewer troubles in the plains don't want to bother themselves by taking this difficult job.

"There is no access of health, education, communication and other facilities in hills. This is the reason why people prefer living in plains," said Rajkumar. He opined that most of the locals migrated to cities or to Tarai region because of lack of infrastructures and services in the mountain region.

"This ultimately has resulted in decline in animal husbandry," Rajkumar added. He further informed that there was a time when there used to be uncountable number of sheds in the highlands but now only few are left.

In fact, the number of people selling sheds has increased significantly in last few years.  Unvailability of workers and lack of co-operation from his children have compelled Jung Rai to raise cattle on his own in Prangbung. "It takes a lot of hard work and patience in this profession but it also provides enough money for making our family's ends meet," he said. As many people migrate to plains in search of better facilities, some of the places have worn a deserted look.

Ban on the entrance of livestock in Singalila National Park of India has also affected this profession. Besides that, human resource crunch is another major reason behind its unpopularity. Farmers have to struggle a lot to find workers to look after the cattle.

Generally, farmers earn between Rs. 4, 00000 to Rs. 5, 00000 a year from animal husbandry. Those who raise livestock in hills and mountains also own land and property in cities.

Those who live in the highlands with all of their families cannot send their children to schools. They can't even go to hospitals or health posts for treatment and instead rely on local medicinal herbs. According to Bhim Bhandari of Kalikhola, Taplejung, lack of facilities in hills and mountains is the major reason behind decline in livestock farming. Animals like Jokpe (cross between Yak and other cattle), Yak and Fomjo are used as means of transportation in mountainous regions.

As animals like yak can only be raised in high altitude, it's a compulsion for the farmers to live in highlands. Mostly, people raise yaks for fiber, milk and various dairy products.

There are two types of sheds. One is used for raising cows, goats while the other is used for raising yaks. During winter yak sheds are moved to warmer hills from high altitude areas in order to escape cold. In highlands of Panchthar and Ilam animal husbandry is a family business. But, the decreasing number of sheds in recent days has emerged as a major concern.

Until few years back, meat and dairy products used to be the main source of income for these people. As there is good demand for such products in local and international market, farmers could easily sell their products. Apart from stable income source, people involved in this profession are usually very healthy and active. Besides animal farming, these people are also involved in farming of medicinal herbs, mushrooms and pulses. Yaks are more popular for milk products such as cheese, ghee, Chhurpi among others. Its products also have medicinal importance.

LAHAN, Sept 3: With the election just around the corner, political parties in Madhes are in fierce competition to throw away... Read More...