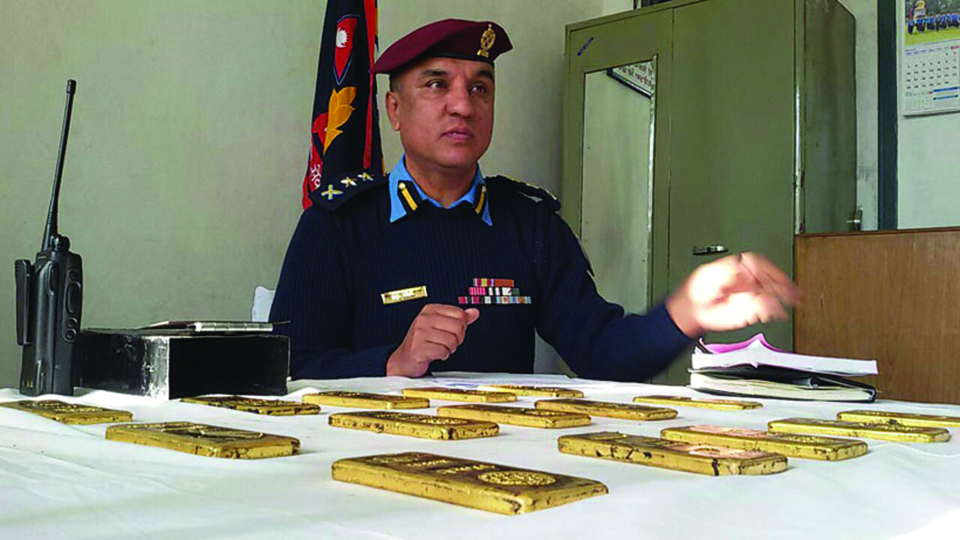 The author is the lecturer of criminology at National Law College
news@myrepublica.com

Combating gold smuggling is a tough job because of strong nexus among smugglers, corrupt leaders, security personnel, bureaucrats and gangsters

The notorious serial killer Charles Sobhraj once ridiculed security system of Tribhuvan International Airport by saying: “It is easy to make the elephant enter from Nepal’s airport.” These unpleasant words ring true even today, when it comes to smuggling of illegal goods skipping the security checkpoints to Nepal where organized criminals operate actively. Criminals have a setting for easy entry and exit of illegal goods through and in the country. No wonder, Nepal has become a transit point for transporting illegal goods such as drugs, endangered species, gold and even human beings to other countries.

The seizure of 88 kgs of gold, the biggest haul ever of yellow metal in Nepal, from Kathmandu on September 4 last year shows how smugglers are thriving in Nepal. Next case of 33 kgs gold smuggling in February, which led to murder of gold carriers and others linked to smuggling spree, shows the entrenched nexus of organized criminals. Nepal Police now and then becomes able to bust such nexus but hide and escape of real smugglers often raise question on whether our police are doing their job well.

According to Nepal Police, they have confiscated 90 kgs, 111 kgs and 61.82 kgs of gold in the fiscal 2013/14, 2014/15 and 2015/16 respectively. However, it is estimated that average 100 kgs gold is smuggled via Nepal for the purpose of local market use. In 2013, it was estimated that 30-40 kgs gold illegally entered Nepal every day through Tatopani check post. A number of incidents of seizure of smuggled gold had been reported when Tatopani checkpoint was operational. Now smuggling happens through Rasuwagadhi checkpoint.

According to World Gold Council, China is the world’s top producer of gold and it is the world’s largest market of yellow metal. On the other hand, India is the world’s second largest consumer of gold. Price of gold in India is higher compared to China and other international markets. This is why most gold is smuggled to India, where smugglers get much better money. This is the reason criminal networks are flourishing in this region. It is estimated that 500 kgs of gold is smuggled and more than 70 kgs gold is trafficked to India via Nepal each day.

Corrupt elements within our security bodies have often provided support to organized criminals involved in smuggling gold. There are reports of Nepal Police personnel looting the smuggled gold and submitting much less than seized quantity to the authorities. Senior police officers are also involved in such irregularities to grab commission. Regarding the 33 kgs gold scandal senior police officers are suspected and they are under investigation for their involvement in organized crime.

In the recent times, the number of organized criminal gangs involved in gold smuggling is increasing sharply. This results in new form of conflict among them and they start to betray each other. When one group has to score revenge against other, they inform the police of smuggling racket of another gang.  In some cases, even police are involved in gold smuggling. Central Investigation Bureau of Nepal Police had arrested senior officer and customs officers in January, 2017 in charge of smuggling.

Nepal should not be allowed to become playground for organized criminals. We cannot remain a transit point for smuggling of goods to India, China and third countries.

The author is the lecturer of criminology at National Law College

Government committed to curb drug abuse and smuggling (with photos)

KATHMANDU, June 26: The Ministry of Home Affairs (MoHA) expressed solidarity against drug abusers and smuggling on the occasion of... Read More...

RASUWA, Oct 17: Nepali Congress (NC) has fielded Man Bahadur Tamang, who was arrested for his alleged involvement in an 88-kg... Read More...

BARA, Sept 25: Queue of heavy trucks loaded with timbers is not an unusual scene on the streets of Birgunj. ... Read More...