4 ropani at Dhobi Khola illegally registered in names of individuals 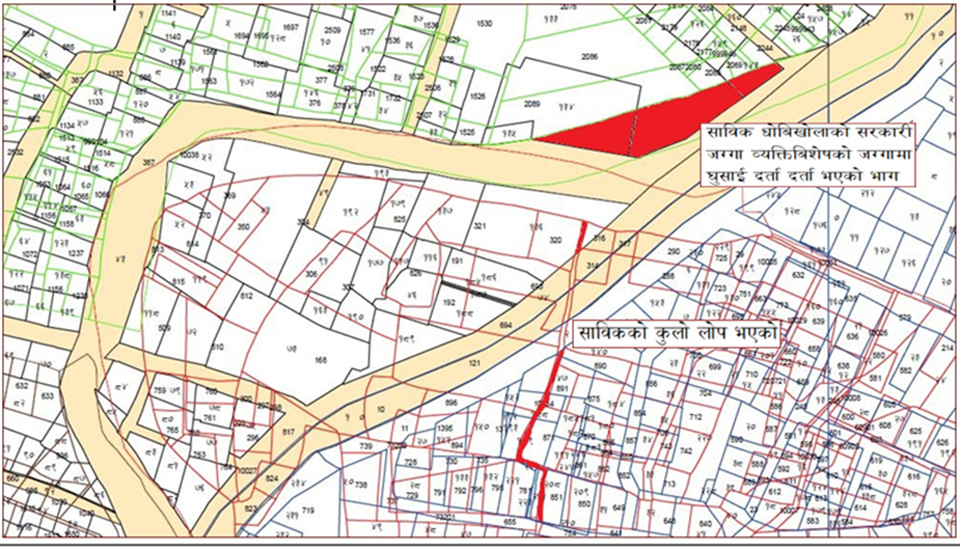 KATHMANDU, May 3: It has come to light that around 4 ropani [0.5 acre] of land originally belonging to Dhobi Khola (Nilo Pul) in Kathmandu was illegally registered in the names of individuals under the pretext of updating the land survey map.

An investigation into the encroached land in the area has found that at least 2 ropani of public land at Nilo Pul (near Gopi Krishna Cinema) mentioned in sheet number 102-0987-15 was included as a plot belonging to private individuals (plot number 30) under the pretext of updating the survey map. The 2 ropani  was illegally registered in the names of Bijaya Sambahamphe and Nanda Maya Limbu.

Some portion of the land at Dhobi Khola registered as the erstwhile Chapali 9 (c) 2  plot was included in plot numbers 133, 134 and 143 to transfer ownership to individuals while conducting a fresh survey around Dhobi Khola.

Sambahamphe is the owner of Loyalty School. The four ropani  land belonging in Dhobi Khola has been registered in the names of Sambahamphe and his wife.

Land revenue and survey officials had allegedly included in the names of the Sambahamphe couple an additional 3 ropani 15 ana and 1 paisa of land registered under Dhobi Khola.
A probe committee formed under then chief of Chabahil Land Revenue Office, Shankar Prasad Bhetuwal, some seven years ago had submitted a report stating that illegal structures were built along the Dhobi Khola riverbank -- from Loyalty School to Ekata Basti settlement -- encroaching upon public land.

However, government agencies concerned have so far failed to take any action against those encroaching upon the public land.

Spokesperson at the Commission for  the Investigation of Abuse of Authority (CIAA) Pradip Koirala said they have received a complaint that Dhobi Khola land was encroached in collusion with land revenue officials. “A complaint has been received on the issue of public land in Dhobi Khola Nilo Pul registered in the names of individuals. The commission is conducting investigations into the issue,” said Koirala.

Preliminary investigations show the involvement of some officials of the erstwhile Number 6 Napi Goswara in the land grab. The land ownership certificates registered in the names of individuals have the signature of incumbent Director General of the Department of Survey Prakash Joshi.

Various probe committees including those led by Under Secretary Shanker Prasad Bhetwal and  chief survey officers Ganesh Prasad Bhatta,  Ram Prasad Timilsina and Shiva Prasad Lamsal had submitted different reports on the issue of land encroachment. All these reports had suggested that public land was included in the names of individuals in an illegal manner.

KATHMANDU, March 8: Leaders belonging to the Dahal-Nepal faction of the erstwhile Nepal Communist Party (NCP) have decided to be... Read More...