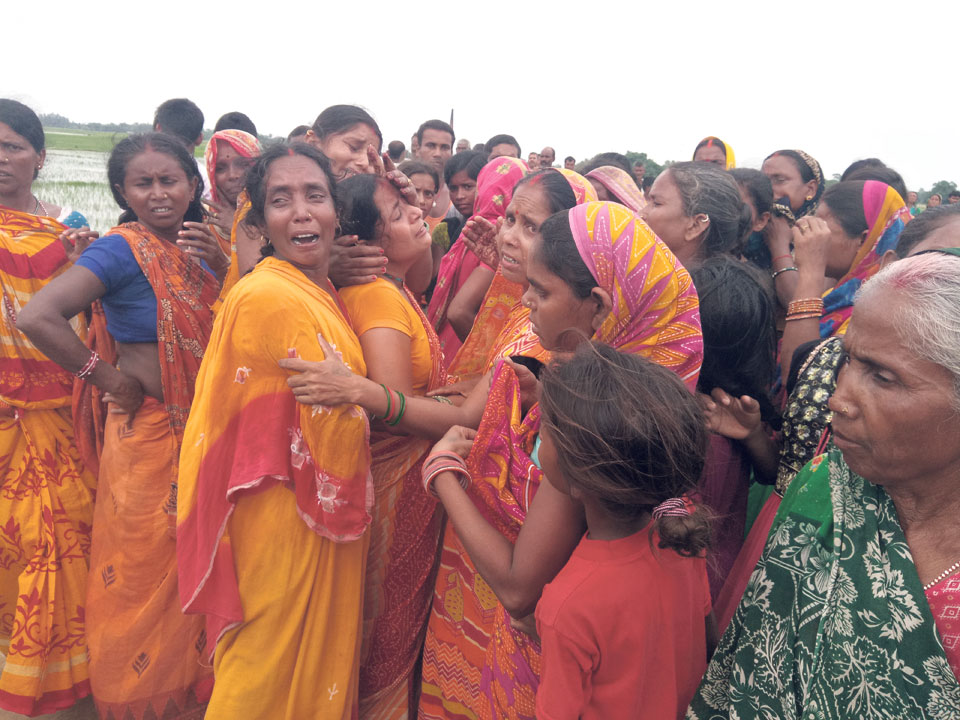 Family members of four girls who drowned in a pit in Rautahat mourn the loss of their loved ones.

RAUTAHAT, Aug 5: Four children drowned in Rautahat district  Saturday in open pits that were dug up for road construction  and  subsequently abandoned without filling them up. The deceased are all girls age 9 to 12.

The torrential rains since the past four days had filled up several open pits alongside the under-construction road section from Garuda to Pani Tanki. The incident took place when the girls jumped into the pits  to bathe.

According to Inspector Keshav Regmi at Garuda Police Station, the girls were returning home from the local forest after collecting grass. They stopped along the road around noon to take a bath because of the extreme heat but they had no idea how deep the pits were.

The  bodies have been sent to the district hospital for  post-mortem, according to the deputy superintendent of police  at Area Police Office, Garuda.

Sanoj Sahan, an eight-year-old local boy  who saw the girls in distress rushed home to inform others There was no one else around at that time to rescue the children .

The Department of Roads (DoR) had contracted out the road construction and there are huge pits alongside most of the road section. These look deceptively shallow when filled with rainwater and have been claiming lives  every monsoon.

The whole village has been saddened by the drownings. Locals  blame the DoR and contractors and accuse the  authorities of gross negligence.

Durga Construction Service of Gaur-6 took on the road contract in May. They constructed he road but did not fill the  pits they had dug up. Police have called in company proprietor Prahalad Shah for investigations. However, he said he has fulfilled his contract  and rejected any blame.

BHAKTAPUR, Dec 27: Lives of children, in particular the children of laborers working at various brick factories in Bhaktapur, have... Read More...