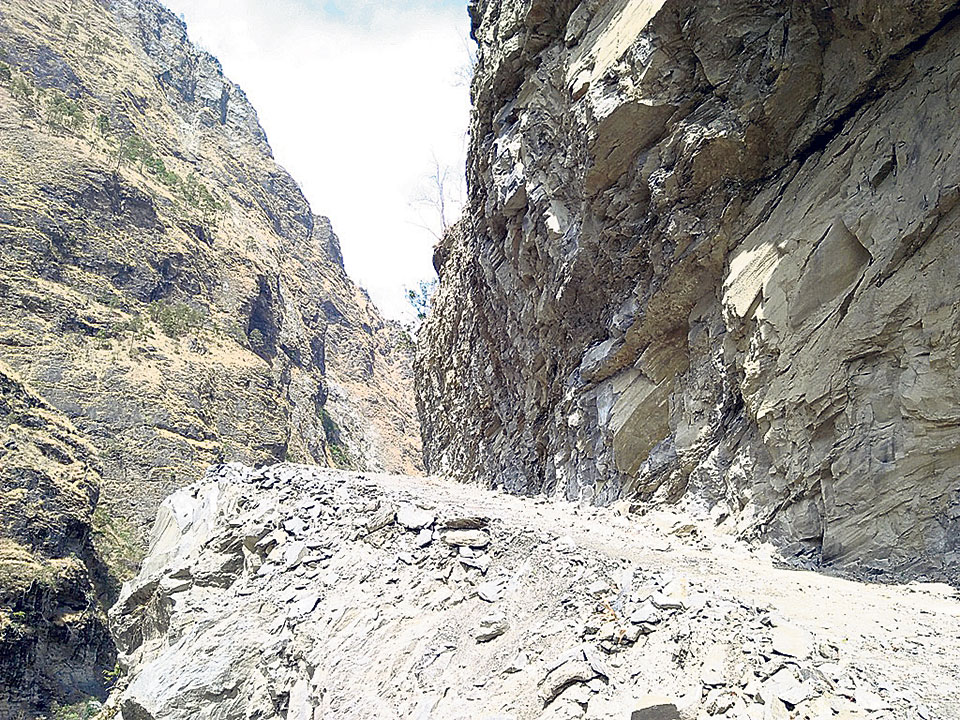 RASUWA, April 14: With the completion of Mailung-Syafrubesi road section in Rasuwa district, the shortest route to China border from the capital has come into life. This route is expected to ease trade with China.

The two-lane road joining Galchi to the northern border via Betrawati came into operation on Friday after the completion of the 17-kilometer section of road between Mailung and Syafrubesi.
However, few things have to be fixed yet in order to allow vehicles to ply on the road.

“This is a big achievement. Now that the road is complete, it will soon come into use,” said Major Sanjay KC of Nepal Army, the project chief.

“It has been done in three years,” he added.

A team of Nepal Army had been assigned the work to build the road in May, 2015 after the earthquake. Fourteen districts including Rasuwa were severely hit by the magnitude 7.8 of earthquake on April 25 that year. Following the economic blockade imposed by India, the route was considered even more vital.

“The road was under national priority and the work was done in good pace,” reported KC.
Earlier, the army was given responsibility of only seven kilometers of the road. After the earthquake, additional 10 kilometers was given to the army.

“Earlier, we were supposed to complete only seven kilometers of the road section. Then the earthquake hit. Following the disaster, we were told to construct 10 kilometers more,” said KC.
According to him, making it two-lane was also decided later.

“We have completed the project within the deadline. It went pretty well,” he said.
A total of 152 army personnel and 90 others were engaged in the project. They are still busy to give finishing touch to the road.

“They are still at work. There are few things yet to be fixed,” said KC. “Until some finishing works of the road construction and upgrading is done, it is not ready for use. Hopefully, it will get the finishing touch pretty soon,” he added.

Even though the road is complete, the army has suggested not to use the road during monsoon for the next two years.

“Due to heavy rainfall, the road might become fragile. It will take time for the road to get stronger or more solid. After two years, it will be okay to use the road anytime,” Major KC explained.

Another reason is that a six-kilometer road section from Simle to Mailung has just a single lane.
Before the completion of this road, the distance between Kalikasthan to Syafrubesi via Dhunche was 54 kilometers. But now, the distance has been cut short to 29 kilometers.

Similarly, another remarkable feature of the road is the absence of turnings. While there are several turnings in the Pasang-Lamhu Highway, the lack of such turnings in the new road is going to be a relief for all.

The total distance from Kathmandu to Rasuwagadhi via Dhunche is 145 kilometers but the new route via Mailung is only 122 kilometers.

“It is both shorter and more comfortable,” said Major KC. “There are 35 turnings in the old route,” he added.

He further stated that the new road would be handed over to the Department of Roads within a month. “The work got bit challenging due to the earthquake. Or else, we would have handed it over much earlier,” he added.

The cost per kilometer of the road is Rs 35 million, according to KC. Although the road is complete, the center is yet to release all the budget allocated for the project.

“There is still need of Rs 20 million. So, a letter has been sent to the center in this regard,” he said.

RASUWA, Nov 25: Agro products worth Rs 770 million have been imported from China via Rasuwagadhi border in the first... Read More...

Rasuwagadhi road obstructed due to landslide

RASUWA, July 16: The road section joining Nepal with China at Rasawagadhi has been obstructed due to landslide. ... Read More...