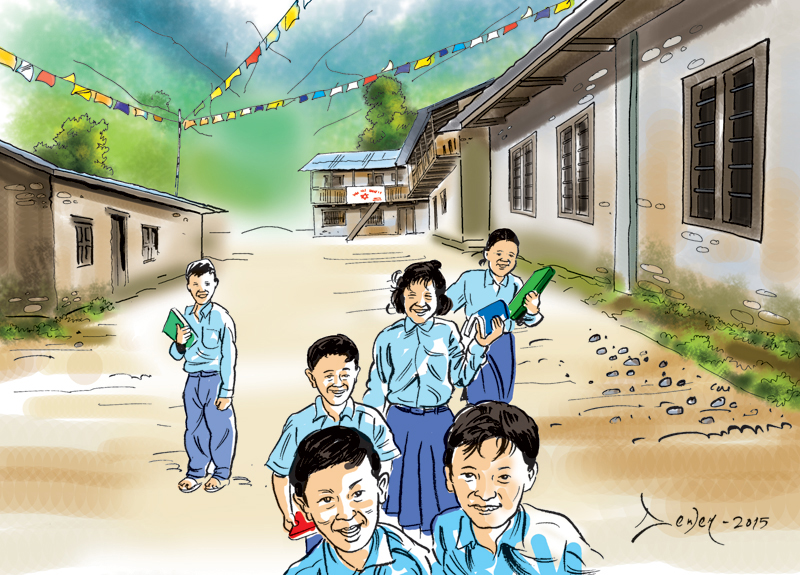 Rs 5 billion is estimated being collected in Kathmandu Valley alone

KATHMANDU, April 13: Private schools all over the country have collected an estimated  Rs 15 billion from  guardians under the head of annual fees for the academic session that begins from April 14. An estimated Rs 5 billion is collected under this head in Kathmandu Valley alone.

The private schools have been reported  charging up to Rs 200,000 as admission fees and  upto Rs 40,000 as annual fees. The Education Regulations (sectuions 145, 146 and 147) have described in detail the conditions for charging such fees while restricting the  fees for readmissions . The regulations allows  schools to charge a total annual fee that is not more than the amount of  tuition fees for two months.

However, private schools have charged Rs 8,000 on average from each of the 1.5 million students, said Suprabhat Bhandari, former president of the Guardians Association Nepal (GAN). Bhandari, in a  paper presented at a  conference convened recently by GAN in Hetauda,  calculated that the average amount collected as annual fee is Rs 8,000. "We have found that  private schools  charged upto Rs 200,000 as annual fees," he added. "A and B grade schools charge high annual fees, which is against the rules."

The private school organizations have admitted that  schools have charged the annual fee  as the rules don't allow them to charge for readmission . "The rules allow us to charge fees upto a total of two months' tuition fee as annual charges," said Bijaya Sambahamphe, president of  PABSON. "If the schools have approved such fees through a meeting  of the guardians, they can charge on the higher side and under whatever head," he added.
Ritu Sapkota, president of  NPABSAN, also conceded that schools  charge annual fees . "The schools should not charge more  than what the law has permitted," he said. "The private schools cannot run without charging fees  but the fee structure should be rational," he added.  "However, the government has never taken the initiative to formulate the basis for a rational fee structure in  private schools."

The government has failed to regulate the private schools and force them to operate rationally, said Bhandari. "On the other hand, the private schools have not paid the education tax. Instead of paying the tax out of their gross income  they pass it on to the guardians," he added.

Baikuntha Aryal, spokesperson for the Ministry of Education, Science and Technology (MoEST), said that  private schools cannot charge readmission fees and annual fees at the rate of more than two months' tuition fees. "They can charge for monthly tuition, special training and exams," he said. "We will investigate  the matter and take action in coordination with locals bodies to punish schools violating the rules," he added. MoEST expresses this commitment every year  but this has never been translated into action.