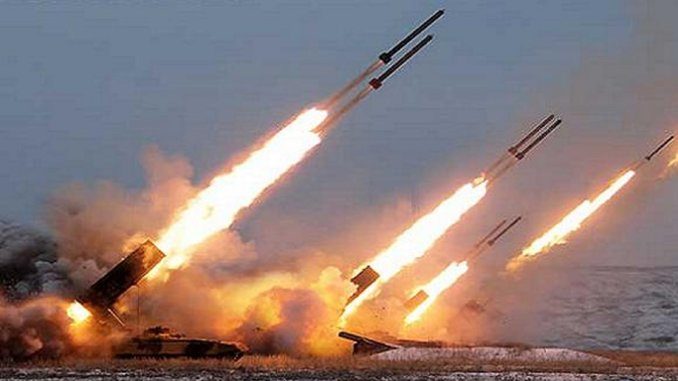 APRIL 11: Russia's ambassador to Lebanon has said any US missiles fired at Syria would be shot down and the launch sites targeted, a step which could trigger a major escalation in the Syrian war.

Alexander Zasypkin, in comments broadcast on Tuesday evening, said he was referring to a statement by Russian president Vladimir Putin and the Russian chief-of-staff.

"If there is a strike by the Americans then... the missiles will be downed and even the sources from which the missiles were fired," he told Hezbollah's al-Manar TV.

He also said a clash "should be ruled out and therefore we are ready to hold negotiations".

Responding to the ambassador’s comments, General Richard Barons, who led the UK’s joint forces command from 2013 to 2016, told the BBC’s Today Programme: “I hope the ambassador has chosen his words very carefully because what he’s actually saying is that if the US and allies decide to strike against Syrian chemical weapons and delivery aircraft, not only are they going to try and shoot down the missiles in flight - which they're capable of doing, but won't be with total success - but by saying the words 'launch platforms', he’s saying they are going to try and sink ships, sink submarines and shoot aircraft out of the sky – that’s war.”

On Tuesday, Russia and the US blocked attempts by each other in the UN Security Council to set up international investigations into chemical weapons attacks in Syria.

As Russia warns against US strike, Trump threatens missiles

SEOUL, August 11: With North Korea threatening to send a salvo of ballistic missiles close to a U.S. military hub in... Read More...