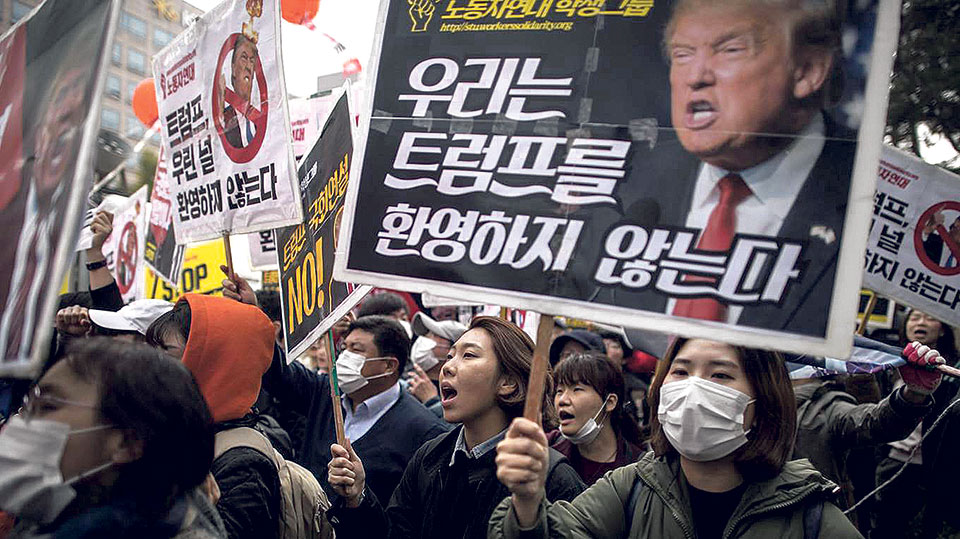 A frequently heard question in Singapore is: Will US leadership in Asia survive the Trump years?

SINGAPORE – When the Trilateral Commission—a group of political and business leaders, journalists, and academics—met here recently, many expressed concern about the decline of American leadership in Asia. Every Asian country now trades more with China than with the United States, often by a margin of two to one. That concern has been exacerbated by President Donald Trump’s recent imposition of tariffs and expressions of contempt for multilateral institutions. A frequently heard question in Singapore: Will US leadership in Asia survive the Trump years?
History provides some perspective. In 1972, President Richard Nixon unilaterally imposed tariffs on America’s allies without warning, violated the framework of the International Monetary Fund, and pursued an unpopular war in Vietnam. Fear of terrorism was widespread, and experts expressed concern about the future of democracy.

The following year, David Rockefeller and Zbigniew Brzezinski created the Trilateral Commission, which meets once a year to discuss such problems. Contrary to conspiracy theories, the Commission has little power; but, like other informal channels of “track two” diplomacy, it allows private citizens to explore ways to manage thorny issues. The results can be found in its publications and on its website.

In Singapore, there was no consensus about Asia after Trump. For example, Indian and Chinese members held different positions about the role of China’s “Belt and Road” infrastructure projects. Some Asians and Americans differed over the prospects for a successful resolution of the Korean nuclear crisis, as well as the larger question of whether a China-US war is inevitable. And some Europeans wondered whether the current global uncertainty reflects the rise of China or the rise of Trump.

My own guess, which I warned the group might be wrong, is that the US can recover its leadership after the Trump years if it relearns the lessons of using power with others as well as over others. In other words, the US will have to use its soft power to create networks and institutions that will allow it to cooperate with China, India, Japan, Europe, and others to deal with transnational problems—for example, monetary stability, climate change, terrorism, and cyber-crime—that no country can solve unilaterally. That will require overcoming the unilateral policies and attitudes associated with the rise of Trump.

As for the rise of China, contrary to current pessimism, the US will retain important power advantages that will last longer than even an eight-year presidency, should Trump be reelected. The first is demography. According to United Nations data, the US is the only developed country expected to contribute to global population growth by 2050. China, the most populous country now, is projected to lose the top spot to India.

The second advantage is energy. A decade ago, the US seemed hopelessly dependent on imported energy. Now the shale revolution has transformed it from an energy importer to an exporter, and North America may be self-sufficient in the coming decade at the same time that China is becoming more dependent on energy imports.

Technology is a third advantage for the US. Among the technologies that will convey power in this century are biotechnology, nanotechnology, and the next generation of information technology, such as artificial intelligence and big data. According to most experts, while China’s capacity is improving, the US remains the world leader in research, development, and commercialization of these technologies.

Moreover, in terms of the research base, America has a fourth advantage in its system of higher education. According to a ranking by Shanghai Jiatong University, of the top 20 universities in the world, 16 are in the US, while none are in China.

A fifth American advantage that is likely to outlast the Trump era is the role of the dollar. Of the foreign reserves held by the world’s governments, just 1.1 percent are in renminbi, compared with 64 percent for the dollar. When the International Monetary Fund included the renminbi in the currency basket underpinning its unit of account, Special Drawing Rights, many believed the dollar’s days were numbered. But the renminbi’s share of international payments has slipped since then. A credible reserve currency depends on deep capital markets, honest government, and the rule of law. None is likely in China in the near future.

Sixth, the US has geographical advantages that China lacks. The US is surrounded by oceans, and Canada and Mexico remain friendly, despite Trump’s mistaken policy of undercutting the North American Free Trade Agreement. China, on the other hand, has borders with 14 countries and territorial disputes with some of the most important, such as India, Japan, and Vietnam. This limits China’s soft power. And while geography gives China land-based power projection over the South China Sea, the US has no territorial claims there and enjoys naval supremacy over the remaining 95 percent of the world’s oceans.

But, most important, the US and China are not destined for war. Neither poses an existential threat to the other. When World War I began, Germany had surpassed Britain in 1900, and British fear of German intentions contributed to the disaster. By contrast, the US and China have time to manage their many conflicts and need not succumb to hysteria or fear.

The US retains not only the power advantages described above, but also its alliances with Japan and South Korea. In any upcoming talks with North Korea’s leader, Kim Jong-un, Trump will have to take care to prevent the Kim regime from achieving its long-standing objective of weakening those alliances.

In Singapore, I quoted Lee Kuan Yew’s response to a question I once asked him about whether China would surpass the US. He said “no,” because while China had the talents of 1.4 billion people to draw upon, the openness of the US allowed it to tap and combine the talents of 7.5 billion people with greater creativity than China could. If that openness survives, American leadership in Asia, and elsewhere, will most likely survive as well.

Joseph S Nye is a professor at Harvard and served until recently as North American chair of the Trilateral Commission © 2018, Project Syndicate

NEW YORK – History at any moment can be understood as a snapshot, telling us where we are, or as... Read More...