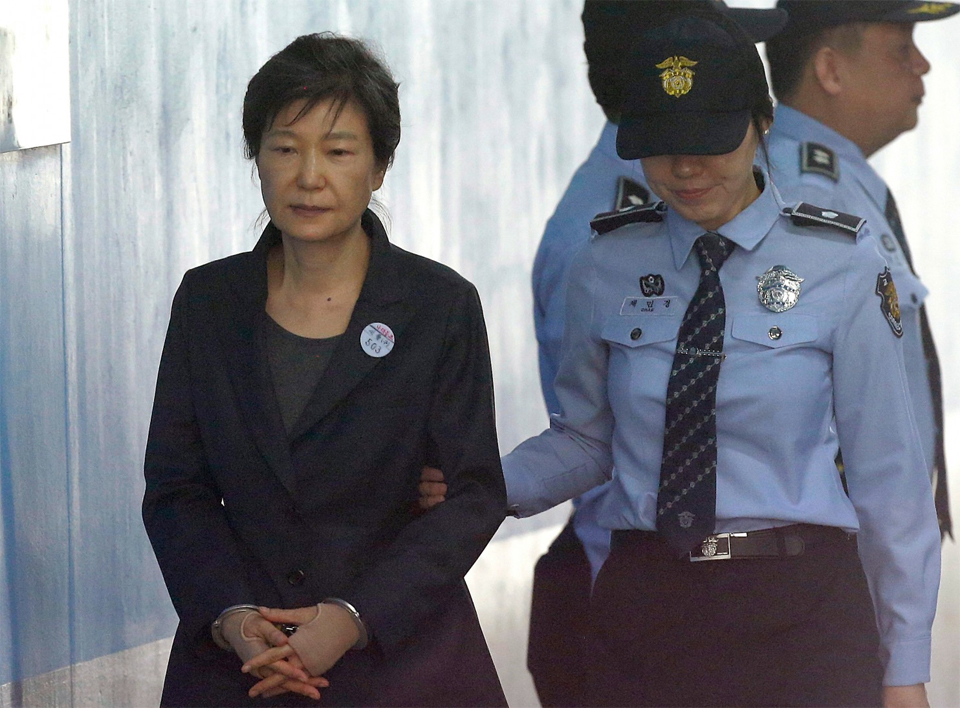 TOKYO April 6:  Former South Korean president Park Geun-hye, who was impeached last year amid a sensational corruption scandal, was found guilty Friday of charges including bribery, coercion and abuse of power.  She was sentenced to 24 years in prison, tantamount to a life sentence for the 66-year-old.

In a first for South Korea, the sentencing was broadcast live on television — a sign of the intense public interest in the case. Park, a political princess who became South Korea’s first female leader, was dramatically impeached just over a year ago after months of protests, then swiftly arrested for corruption.

For many South Koreans, the case starkly illustrated feelings that the system is stacked against them and that only the rich and well-connected can get ahead. That feeling has only grown with the arrest of Park’s predecessor, fellow conservative Lee Myung-bak, on unrelated corruption charges.

Together, the cases have added new momentum to efforts to revise South Korea’s constitution and dilute the power of the presidency.

In the case of Park, she faced 18 charges relating to a massive corruption scheme. In addition to the bribery and coercion charges, they include accusations that she leaked government secrets and abused her power by giving favorable treatment to business groups.

She is alleged to have been part of an elaborate extortion scheme with her confidante, Choi Soon-sil — allegations that she has strongly denied.

Choi was accused of setting up two charitable foundations ostensibly to promote sports, but in fact using them as slush funds for the president and for herself. She and Park were accused of extracting bribes or promises of bribes totaling $70 million from conglomerates including Samsung and from big businesses in return for favorable treatment from Park’s government.

In February, Choi was sentenced to 20 years in prison and fined almost $17 million for her role in the scheme.

Prosecutors had been asking for a 30-year prison sentence and a fine of about $120 million to be imposed on the former president. Numerous supporters of Park’s gathered outside Seoul Central District Court Friday, waving South Korean and American flags, to protest against her prosecution.

Inside, the three judges found Park guilty of almost all the charges, noting that the others were only partly proven. Notably, they found her guilty of receiving a $35 million bribe from Samsung.

They sentenced Park to 24 years in jail and fined her $17 million.

Park was not present in the court, having refused to attend court hearings since last October. And, unlike the rest of the country, would not have been able to watch the sentencing on TV in her 108-square-foot cell because she’s only allowed to view pre-recorded programs.

This is the first time a court proceeding has been broadcast live on South Korean television and follows a legal change last year allowing broadcasts when judges deem them in the public interest.

Throughout the case, Park has strongly maintained her innocence, saying she is the victim of “political revenge.” She is certain to appeal her sentence.

In her solitary cell, Park has been eating apples and yogurt rather than prison food and has been reading popular comic books, including ones about fortune telling and a legendary karate fighter, according to local reports. She has been refusing to meet with anyone except her lawyers.

Friday’s sentencing is the latest chapter in the downfall of a South Korean blue blood.

Park is the daughter of Park Chung-hee, the former military general who seized power in 1963 and served as South Korea’s strongman president for almost two decades. He oversaw the transformation of the country from rural backwater to high-tech exporting powerhouse. But his rule was marked by the often-brutal repression of civil liberties.

In 1974, Park’s mother was assassinated by a North Korean sympathizer who was trying to kill her father. At the age of 22, she effectively became first lady. Then, in 1979, Park’s father was fatally shot by his own spy chief.

During this period, she came to rely on a kind of shaman fortune teller who was close to her father. The shaman reportedly began conveying to Park messages from her mother in the afterlife. This led U.S. diplomats in Seoul to call him a “Korean Rasputin,” according to a leaked State Department cable.
When the shaman died in 1994, his daughter took over his role of providing spiritual advice to Park, who was estranged from her siblings. The daughter was Choi Soon-sil.

After Park was elected president of South Korea in 2012, she continued to rely on Choi for guidance on everything from policy prescriptions to wardrobe choices. Choi had no official title and no security clearance,but saw Park much more frequently than the president’s own staff.

But in 2016, reports of Choi’s influence emerged, leading to revelations that she had been extracting money from big businesses on the president’s behalf.

The most deeply involved was Samsung, South Korea’s largest conglomerate.

Lee Jae-yong, the de facto head of Samsung, and other Samsung executives were accused of paying or promising to pay $30 million more in bribes to Choi. For her part, Choi was to make sure the conglomerate won regulatory approval for a huge merger that was crucial for the Lee family’s efforts to keep control of the group.

Lee was convicted last year of paying bribes totaling $6.4 million to Choi, embezzling corporate money to fund the bribes, then lying about it. He was sentenced to five years in prison but served only six months before being released.

While this scandal has been roiling South Korea, another former president has found himself in hot water.

Former conservative president Lee, Park’s predecessor, was arrested last month on a raft of charges including bribery, embezzlement, tax evasion, abuse of power and breach of trust. The 76-year-old, who was president from 2008 to 2013 and made his name as chief executive of Hyundai Engineering and Construction, is now being held in a separate jail from Park.

South Korean presidents have an inglorious record when it comes to corruption and prison time. This is not even the first time two former presidents have been detained simultaneously.

Chun Doo-hwan and Roh Tae-woo, former Army generals who became president after Park’s father, were imprisoned for mutiny and corruption in 1995, eight years after South Korea became a democracy. However, they were pardoned in 1997.
The cases involving the two most recent presidents have helped grow support for constitutional reform.

South Korea’s constitution has not been changed since 1987, when it was revised to mandate direct presidential elections. But elected presidents were limited to a single, five-year term to stop the kind of long tenures that Park’s father had enjoyed.

The current government, led by progressive Moon Jae-in, is promoting a revision that would allow a president to serve two four-year terms, as in the United States.

Similar plans have been put forward by previous presidents, but the government’s plan is the subject of political wrangling now. Moon wants a referendum in June, during local elections, but the opposition wants more time and prefers a separate vote later in the year.