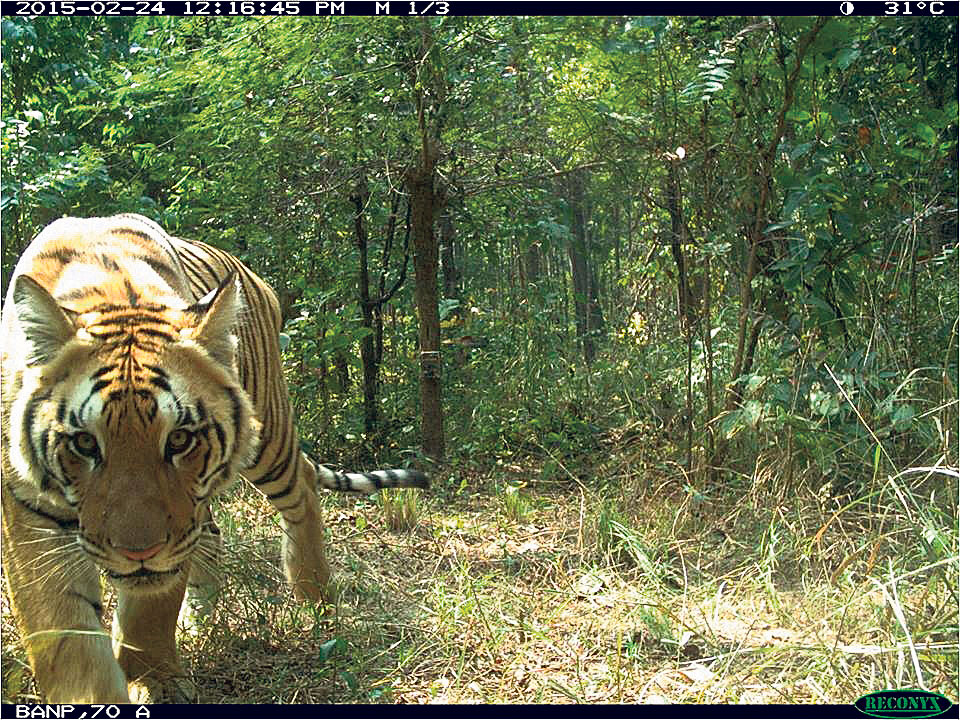 A Bengal tiger seen in Banke National Park on February 2, 2015.

KOHALPUR, April 5: Scarcity of water in Banke National Park (BNP) has compelled the tigers to venture into human settlements, increasing the risk of human-wildlife conflict.

BNP is prone to dry spell during the summer season, forcing the tigers and other animals out of their sanctuary to quench their thirst. Though this national park was established with the aim of protecting tigers, lack of sufficient water has made it challenging.

It has been found that humans often attack tigers if they enter into their settlement out of fear and some people even kill tigers due to the fear of being attacked.

“Wild animals either have to reach to Chure or into the human settlements to get water,” said Assistant Conservation Officer Rabin Chaudhary.

BNP has a wide range of animals such as elephants, tigers, chital (deer), wild boars, leopards among others. Some of the wild animals have even met with accidents while reaching the Rapti River for water.

BNP has created artificial ponds in various parts of the national park to provide water to the wild animals. There are almost 21 different man-made sources of water but many of them have dried up. BNP is still preparing to create more sources of water to conserve the rare and endangered animals.

Lal Bahadur Bhandari, acting chief of BNP, informed that a 110-meter long, 85-meter wide and 2-meter deep pond has been constructed in Giddhechaur for conserving the habitat of tigers and other wild animals. He further informed that this is the largest source of water in BNP which is expected to benefit a large number of animals. In fact, this has offered a great respite to the wild animals in the western parts of the national park.

But still, there are many places in BNP where animals have to struggle for food and water. Lack of water has threatened their existence. “In comparison to the past, there is more availability of water in the national park. But we have not been able to solve this problem due to absence of permanent source of water,” said Acting Chief Bhandari.

Few days ago, the tiger census was completed and the results are currently being analyzed. The total number of tigers will be published by mid-May, as per the officials of BNP. According to Bhandari, improvement in the habitat of tigers has resulted in the increase in their number.