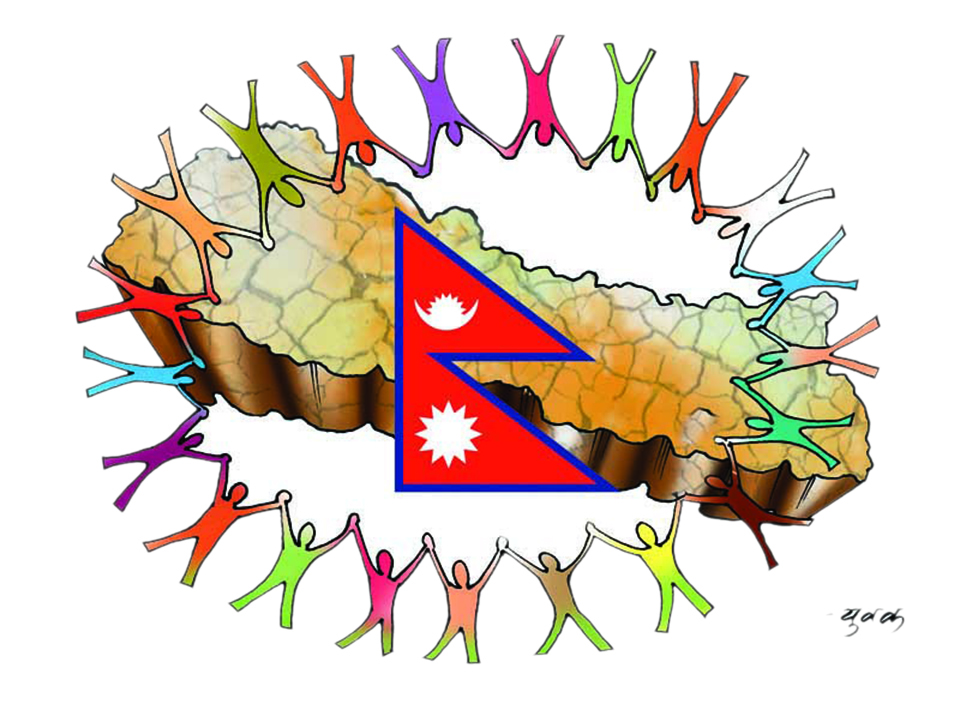 The recent stir ignited by the European Union Election Observation Mission’s (EU EOM) final report has been quite a scene in Nepal. This particular instance reflects something alarming and generic about what offends us and triggers our nationalistic button.

In just two fiscal years (2015-17), Department of Foreign Employment (DOFE) issued 786,636 labor permits for foreign employment. The victims of 2015 earthquakes are still waiting for the promised support. The victim of the decade-long armed conflict and their families’ outcry for justice is a routine chore. In our model of welfare state, individuals have to fight against the government to make sure medical education isn’t below par. Rape and gender-based violence is routine news for us.

We barely maintain our cultural heritage and work for their protection and promotion. There are hundreds of other such incidents which do not offend our government or us.

On the flipside, let someone pass on a comment on where Lord Buddha was born. Let someone tell us about our laws and practices we ought to change. Let someone merely point out the finger at animal sacrifice and animal cruelty occurring in the name of culture. Let someone trigger our inflated nationalism, and then we all feel offended. We vent our anger and discontent in social media and platforms where they are possible. Remember how Indian actor Hrithik Roshan had to pass on a comment on Nepal that sparked riot back home killing innocent kids,  injuring common people and destroying our property.

The question of what offends us reflects a great deal of paradox of our collective value as a Nation. We are being offended when it’s easy and when being offended is beneficial for our cause. We see many playing nationalistic cards to capitalize the opportunity. Maybe, it’s time we look back and reassess what needs our attention and fury for good.

We all must have love, respect, and have an affinity towards our nation. Our nationalism should have roots in our shared value, common heritage, history, culture, among other things. Our nationalism should inspire us to work for the wellbeing of the country and countrymen. But have we identified the root and values we take pride in? Being a nationalist doesn’t necessarily mean that you become edgy on every question, concern, opinion, recommendation or the comments directed to the nation. If we feel the urge to justify our nationalism every now and then, maybe we need to revisit the foundations of our nationalism.

We should not tolerate any interference in our internal affairs and must pacify all threat against our independence, sovereignty, and territorial integrity both internally and externally. We must at all time remain wary of the threat against our nation and address it appropriately. However, the ‘how’ and ‘why’ of our nationalistic recoil must not be populist. We all need to internalize what it means to be nationalist. Be nationalist and be offended, but not only when being offended is the easiest and populist choice.

The recent row of EU EOM report and its resultant reactions in government and public must be seen in the broader context. We should voice our disagreement, but without being whimsical. We need to make choices on what we spend our effort and energy on. There are bigger and better things to worry about than EU EOM report and its recommendations. We need to take in criticisms and use them in a constructive manner. That’s what democratic societies do.

It would be logical to get offended by the fact that our youths are dying in the Middle East. Let’s be offended by injustice, impunity, rape, inequality, corruption, unaccountability and hundreds of other things eroding our country.  Let’s not be offended by Facebook posts, someone’s opinion of us or what someone suggested us. Let us remember those who carry populist nationalism in every opportunity may be a more severe threat to our nation.

The author is an advocate with specialization in human rights law

Actress Kangana Ranaut, who chose to flaunt a traditional Kanjeevaram sari styled with a twist with a corset and gloves... Read More...

Many Chinese fear that the “Chinese Dream” may be just that: a dream ... Read More...