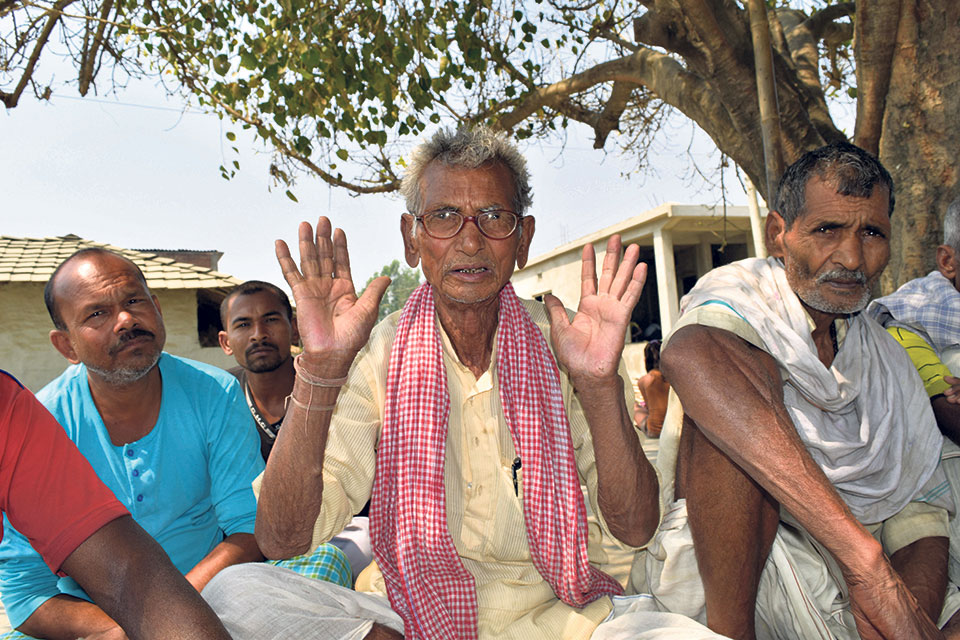 Farmers of Bandipur in Siraha district lament of not having water for irrigation. Photo: Mithilesh Yadav/Republica

SIRAHA, April 1: What a farmer really wants is better irrigation for his land. For Mukti Lal Singh, 55, of Bandipur, a remote village in the western part of the district, a river is not far from his wheat fields. But with no proper irrigation works in place, the Kamala River has been of no help. He has been struggling to manage irrigation water.

“Given the dry topography, I need a supply of water three to four times in a season for the wheat crop.  But  I've been hardly able to manage the supply even once,” he rued. He fears he could lose his crop.

For quite a while now, farmers in the village have been facing the problem of irrigation water for their crops. Even those who have access to the river water complain that they do not get enough of it.

The new governments in the province as well as at the center have ignited a new hope among farmers like Singh.

He said many farmers in his village are hopeful the new government will take initiatives to expedite the barrage construction in the area. The construction on the Kamala River barrage started some four years ago. But it has barely made any progress.

“The construction delay has really frustrated us. We are looking forward to the new government intervening and expediting things. If we can bring Kamala water to our fields, all our plights will be over and we will easily be able to produce more crops,” said Ram Babu Yadav, another farmer.

He said the new government should address the concerns of farmers like him and finish the construction project on time. “Province 2 has huge potential for agriculture given the vast swathes of arable land. It's high time the government developed the necessary infrastructure to give a new lease of life to farming here,” he said.

After the annual crop yield plunged due to water shortage in recent years, many farmers left for the Gulf countries and India for employment, he said. “I am sure if necessary irrigation facilities are developed, they will return to their farms.”

Mohammad Sarif, also a farmer as well as a retired government employee, shared that many farmers from the village used to sell their crops to India until just two decades ago. “But soon, the trend reversed. If the government address our concerns, we can be self-sufficient in agriculture again,” he added.

A canal in Bandipur of Siraha district without water.

UML, MC pin hopes of merger in another ‘decisive’ meet

KATHMANDU, Mar 7: The government has not yet fixed the minimum support price for sugarcane although the crushing season is nearing... Read More...