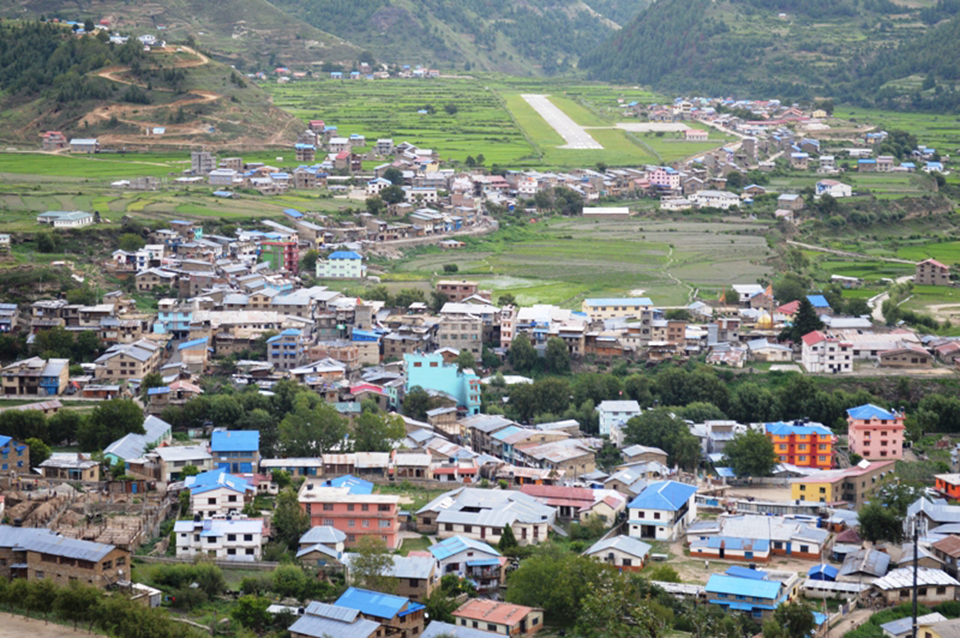 An unplanned settlement in Khalanga of Jumla.

JUMLA, April 1: Unplanned urbanization has resulted in the loss of cultivable land in Khalanga, the district headquarters of Jumla. It has not only tarnished the beauty of Chandannath Municipality but also invited several environmental problems.

In recent days, a large number of people have been constructing houses without getting their blueprints approved from the government authorities concerned. Until a few years ago, there were many places in Jumla that were known as the storehouses of grains but now large buildings cover those places. Of late, the locals have started raising concerns about the buildings which have been constructed by breaching the government standards.

Government authorities concerned have expressed concern over the unplanned settlements. Random and haphazard construction of houses has destroyed arable land which was once used for cultivating crops like wheat, barley and rice, according to Bharat Prasad Kandel, agriculture development officer.

"Agricultural production has been decreasing day by day in the district," said Kandel. According to him, people might make good money by keeping tenants in their homes but they will regret their decision in the future when they will start missing the organic crops. More than 60 large buildings have been built in Khalanga in the last two years.

A few years ago, Yagya Bahadur Mahat had to use his agricultural land for constructing a house so that he could make his family's ends meet. "We don't have any other source of income and we have been managing food and education of our children from the money earned from rent," said Mahat, adding, "These days' people refuse to stay on rent in remote areas. They prefer living in the headquarters." But he too misses the organic vegetables that once grew in his field.

With the aim of mitigating the hazards of unplanned urbanization, Chandannath Municipality is preparing not to allow the construction of new buildings on agricultural land. "We are formulating new laws for managing settlements," said Mayor Kantika Sejuwal, adding, "It is very important to protect the fertile land." She further said that the municipality will be strictly inspecting and monitoring the situation now onwards. "Stern action will be taken against those who breach the laws put in place by the municipality and the government," said Mayor Sejuwal.

Stating that the Supreme Court has already issued a ruling barring the plotting of agricultural land, Deputy Mayor Apsara Devi Mahat said, "People will be allowed to use their agricultural land for settlement only in exceptional cases."

Fugitive arrested from his house in Jumla
25 minutes ago