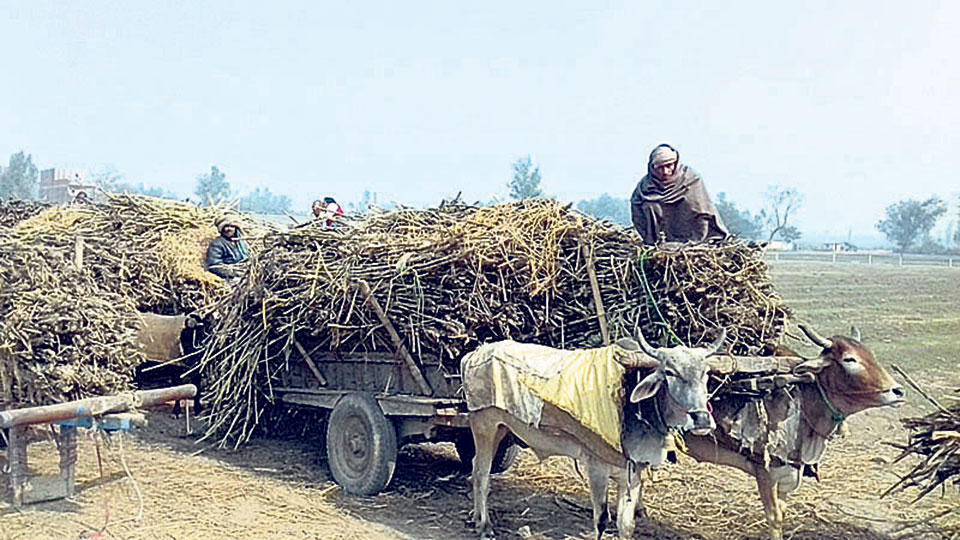 RAUTAHAT, MARCH 27: Thousands of sugarcane farmers in Rautahat district are suffering as abrupt closure of Garuda-based Shree Ram Sugar Mills has forced them to sell canes to middlemen at lower price.

At least 13,000 farmers have canes ready for harvest in their field. Closure of the sugar mill in the middle of crushing season has compelled them to sell their produce at lower price.

“Compared to our cost of production, price offered by middlemen is peanuts,” Kameshwar Sahani, a leading farmer of Rautahat, told Republica. “I sold Rs 500,000 worth of sugarcane to Shree Ram Sugar Mills. However, I have not received even a penny from the transaction,” he said, adding, “I spent Rs 7,000 per kattha for sugarcane production. I don't know when I will get payment.”

With Shree Ram Sugar Mills shutting operation, local farmers have no option but to sell their produce to Everest Sugar Mills of Mahottari. Although the government has set minimum support price of sugarcane at Rs 531.2 per quintal, middlemen are offering only Rs 350 per quintal. Farmers say local authorities are turning a blind eye toward prejudices against them.

Local farmers started selling canes to middlemen after they came to know that farmers in Parsa district were selling canes to a Bara-based mill at lower price after finding no buyer. Now, the Bara-based mill has stopped buying sugarcane from Parsa as it has not been able to crush sugarcane grown in Bara district. However, sources say that the mill is buying sugarcane from Parsa farmers at lower price in a clandestine manner.

Local farmers have government to take strong against mills and middlemen so that they get fair price for their products. They say high-handedness of mill and middlemen will increase further if action against them is not taken on time.