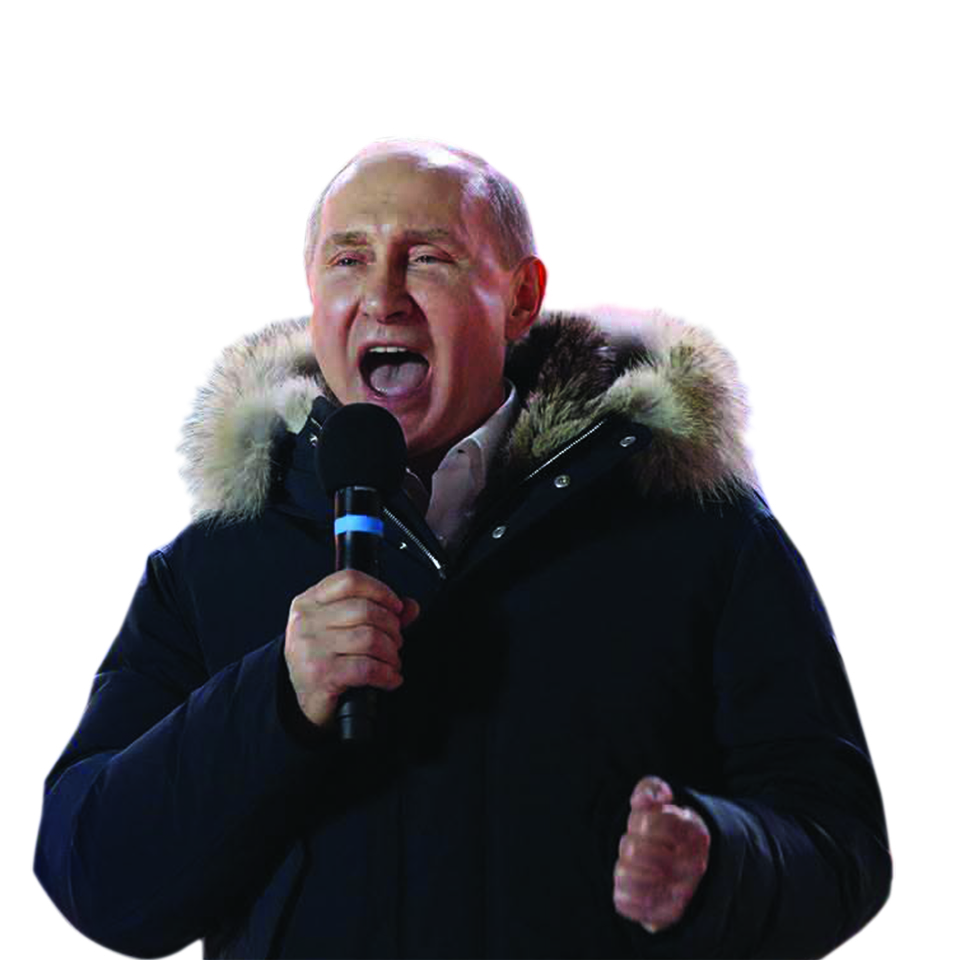 Russians have voted for less social and political freedom and more economic stagnation. They have decided to go back in time, to a future that they once dreaded

MOSCOW – At the beginning of his presidency in the early 2000s, Vladimir Putin was a pro-Western island in a sea of anti-Western Russian elites. As I observed at the time, his desire to “anchor Russia firmly to the West” stood in stark contrast to the country’s traditional notions of security. But after Sunday’s presidential election, in which Putin cemented his vision of Russia as a military bastion, it is clear that now his island is nationalism, and will remain so for as long as he rules the Kremlin.

The danger this poses is all too clear. After 18 years in power, Putin now goes even further than his Soviet predecessors in casually raising the prospect of a nuclear conflict with the West. This aggressive rhetoric seems to have served him well in the election, the result of which has essentially granted him carte blanche for his fourth term.

As I was leaving for the polling station, my niece Masha, a first-year college student, pointed out, “Putin is the only leader I have ever known.” That gave me chills. When I was a first-year college student in Moscow, I knew only Leonid Brezhnev, and what that augured for the future seemed horrifying. Putin, for his part, has already surpassed Brezhnev’s tenure in power and is now second only to Joseph Stalin, who ruled for almost three decades.

Putin won a record-breaking 76 percent of the vote, which means that over 56 million Russians voted for him—also a new record. And the presence of other candidates has afforded his victory a semblance of legitimacy. His “opponents” included Pavel Grudinin of the Communist Party, Vladimir Zhirinovsky of the Liberal Democratic Party, the celebrity-cum-journalist Ksenia Sobchak (the Donald Trump of Russian politics), and Grigory Yavlinsky, who has been running for president ever since Mikhail Gorbachev was in office.

Putin’s previous vote record was the 50 million or so that he received in 2004. But in recent years, he has managed to rally Russians around the flag and marginalize opponents. After annexing Crimea from Ukraine in 2014, criticism of the government came to be regarded as almost treasonous.

To sustain the atmosphere of crisis—the sense that Russia is under attack from all sides—Putin has since exploited various international scandals. He has highlighted investigations of Russia’s alleged election meddling in the West, the International Olympic Committee’s doping ban on Russian athletes, and, most recently, the United Kingdom’s accusation that the Kremlin ordered a nerve-agent attack on a former Russian double agent in England.

With so much bad publicity, it is little wonder that Russians would feel the need for solidarity. Voter turnout, at almost 70 percent, was close to the Kremlin’s target.

Putin wasn’t taking any chances. The Kremlin spent 770 million rubles ($13.3 million) pushing slogans such as, “Vote for Putin, vote for strong Russia.” On the day of the election, officials set up polling stations with food stalls where everything was half price. Viral videos depicted Putin as the sinewy “father of the nation.” Large companies and factories were pressured to mobilize voters. And in far-flung places like Dagestan in the south or Chukotka in the north, polling-station staff were not shy about barging into booths to check that people were indeed voting for Putin.

But even in places where the voting was freer than in Dagestan—such as Kalmykia, Bryansk, Krasnodar, Kursk, and other industrial and agricultural regions—around 80 percent supported Putin. This so-called “red belt” has traditionally supported communists offering patriotic slogans. But in 2018, Putin had a monopoly on patriotism.

Meanwhile, the anti-corruption lawyer and opposition leader Alexei Navalny’s appeal to boycott the election backfired. Navalny argued that people should stay home to deprive Putin of his desired 70 percent turnout. But with Navalny himself barred from running, owing to trumped-up criminal charges, even traditional opposition strongholds like Moscow and St. Petersburg went to Putin.

And yet the absence of liberal candidates does not explain why Putin won 70 percent of the vote in Moscow and 75 percent in St Petersburg (where the turnout was 15 percent less than the national average). Those results suggest that the electorate has become more pliant. Many now feel that it is easier to support Putin’s “strong country” message than to go against the grain and risk accusations of treason and problems at work.

The absence of protest voting this year was a new phenomenon for Russia. My visit to the polling station—to observe, not to participate—reminded me of the Soviet era. It felt like a polite police state: there were around ten people there voting, and at least 20 police officers and voting officials there to watch them. The only difference between Putin’s Russia and the Soviet Union is that voters are now at least given the impression that they have a choice other than the “dear leader.”

According to the voting-rights organization Golos (Voice), there may have been fewer instances of outright ballot-box stuffing or voter intimidation this year than in previous elections. But that is because other techniques—including old-school workplace coercion and non-stop propaganda—have proved so effective. Other than Putin, the only beneficiary of this election was Sobchak, who used the campaign to promote her celebrity brand. Sobchak often refers to Putin as “Dyadya Vova” (Uncle Vova, short for Vladimir), and is happy to help the Kremlin turn opposition politics into frivolous entertainment. She even declared the voting process “more transparent” than in the past, as if she would know.

For Putin, this election allows him to form a new government without regard for once-powerful electoral blocs such as the urban middle class, which is now isolated and willing to go along with “strong Russia” voters. Putin’s regime is stagnant, but it could survive for a long time, given the absence of effective opposition.

What is certain is that Putin cannot fulfill his promise of military might and a prosperous future. The two promises are at odds because sustaining Russian militarism will require raising the retirement age, increasing taxes, and other difficult reforms. In the end, Russians have voted for less social and political freedom and more economic stagnation. They have decided to go back in time, to a future that they once dreaded.