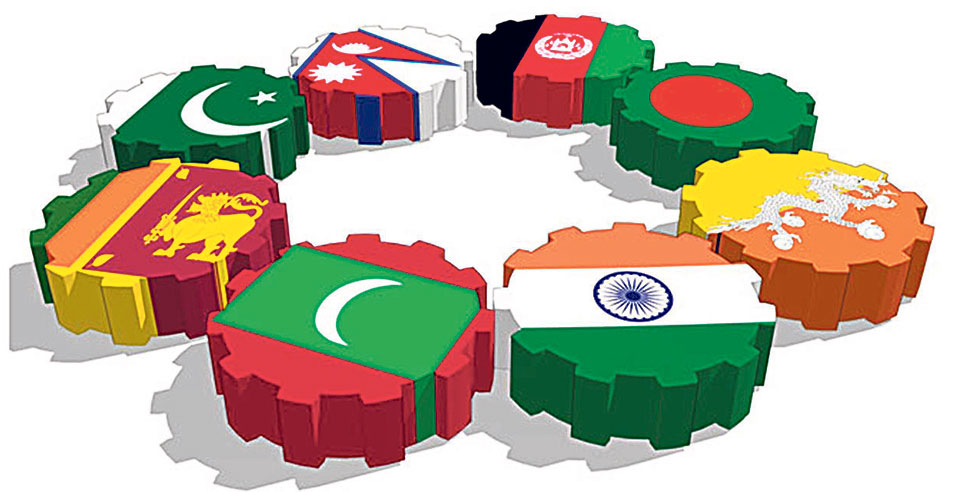 The recent concluded SAARC Business Leaders’ Conclave had the feel of many other SAARC meetings before it – a periodical gathering of ministers, bureaucrats, and business minds coming together in an attempt to state the obvious. I don’t think there are any illusions amongst the people who matter regarding the stumbling blocks to greater regional integration – it has been repeated ad infinitum. The crux of the matter has pretty much been the same – bilateral issues between India and Pakistan and the stipulations of the SAARC charter prohibiting any discussions – and is holding hostage any meaningful progress of SAARC.

While a lot of attempts have been made to deal with non-contentious issues to begin with, progress can be described – that too rather generously – as being modest at best. The South Asian University and connectivity agreements on energy and roads (at least on paper) have been cited as success stories but they are far too little to show for more than thirty years of supposed engagement between member countries. The saving grace about SAARC is that its mere existence provides employment to a lot of people, including yours truly (indirectly) for a couple of years. It also helps to hold annual gatherings like the one alluded to above in the guise of summits, symposiums, conventions, conclaves, and what have you.

While these gatherings are not exactly futile (there is a case to be made for people to people contact in any cross-border initiative), progress is only possible if the ‘people who matter’ are serious about it. Let’s face it, we can beat around the bush all we want with this Eminent Persons Groups and that civil society engagement program but, on the issue of greater regional integration, nothing is going to change without political will. And in the context of South Asia, there has always been a lack of it. Yes, regional integration is a slow, cumbersome process but progress on SAARC so far makes Nepal’s prolonged political transition seem positively meteoric.

In a regional organization where one particular country holds sway – in terms of trade and diplomatic influence (in our case, India) – the onus is on them to drive the process forward. Modi’s ‘neighborhood first’ policy promised to do just that and his speech at the SAARC Summit, 2014 in Kathmandu where he talked about ‘a good neighborhood being a universal aspiration in the life of an individual and a nation’ promised to revitalize a stagnant initiative.

But that lies in tatters now – with relations with Nepal, Bangladesh, Maldives, and Sri Lanka not really being the best advert for Indian diplomacy. Add to that India’s perennially difficult relations with Pakistan and, in this particular climate, it’s hard to see SAARC going anywhere anytime soon. It’s perhaps a sign of its lack of progress that so many sub regional associations now exist for implementing various initiatives and pursuing common interests.

The entire idea of SAARC was to integrate the economies of South Asia but even that remains a pipe dream. For Nepal, SAARC held promise of greater trade with member countries and most importantly with India. While India has reduced its sensitive lists of goods and SAFTA benefits are available to exporters, in practice all of this is made irrelevant by frequent use of Non-Tariff Measures and barriers to restrict market access. You only need to ask the ginger farmers of Eastern Nepal – victims of India’s arbitrary decisions – why their products are good for export on certain days and why not on others. And almost all cases of trade disputes are settled not through SAFTA mechanisms but through bilateral intergovernmental processes.

I can be accused of looking at it through a narrow lens but one has to ask, in this case, that if SAARC cannot serve its basic purpose – i.e. having a say in basic economic transactions between countries then what really is the point of it? There is a case, made by some of our commentators, for using SAARC to balance Indian hegemony in the region. Nothing of this sort is likely to happen because, when push comes to shove, India isn’t going to be held back by SAARC. Remember the economic blockade? A lot of good SAARC was to us back then.

Well, at least we had a week-long holiday in 2014 and have the Airport-Baneshwor stretch of road to show for our involvement in SAARC. I say that in jest (if it wasn’t already obvious) but there is a reason that SAARC bashing has always been in vogue. Apart from the optimism of the first decade or so, it has been characterized by bouts of apathy and for being constantly strained under the burden of its own limitations. It has always seemed, even to this day, like an organization in constant need of a rescue act. Now, all we really need is a rescuer.

KATHMANDU, Aug 8: A two-month long training between Nepal Army and American Army has started from Monday in Kathmandu. ... Read More...