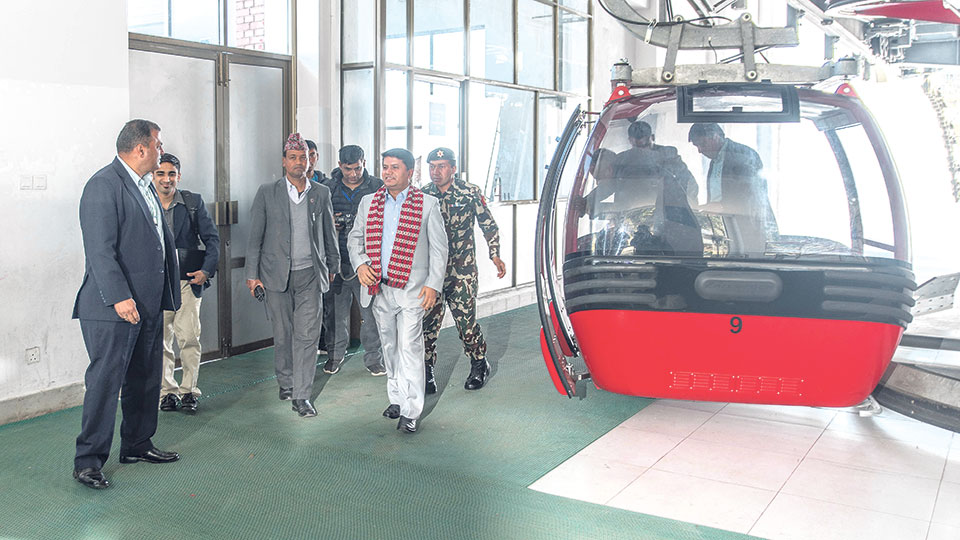 The Minister for Culture, Tourism and Civil Aviation Rabindra Adhikari at the Chandragiri hill station on Wednesday. Photo: Dipendra Rokka/Republica

KATHMANDU, Mar 22: Minister for Culture, Tourism and Civil Aviation, Rabindra Adhikari, has stated that Chandragiri hill station in the southwestern part of Kathmandu Valley is safe for visitors.

The minister was responding to a security alert of the US Embassy in Kathmandu to take caution while visiting Chandragiri Hills Cable Car and while traveling within the valley.

After enjoying a cable car ride to Chandragiri on Wednesday, Adhikari told media representatives: “The notice of the US Embassy came by surprise and it is unfortunate that it has been published in such as way. We will try to solve this issue,” and further added, “I would like to say that the entire country is safe and it is a secure destination for tourists”
The embassy recently published a notice, stating that the hill station is unsafe for US citizens due to violent activities of an alleged group described to have been involved in.

The notice reads: “US Embassy Kathmandu is aware of threats by a local group against the Chandragiri Hills Cable Car attraction through late March 2018. Based on this information, US government employees are not permitted to visit the location during this period of heightened threat.  The same group has also threatened to extort and to engage in acts of violence against other private businesses, including local and international schools within the Kathmandu Valley.”

Minister Adhikari also said that all public and private tourist infrastructures in the country are safe and that safety of all government and private infrastructure is the responsibility of the government. “We are ready to play the role of a guardian in this matter,” he added.

Seconding the minister's claim, a tourist from Japan who visited the hill station on Wednesday told Republica: “I found Chandragiri to be a beautiful destination. The view during the cable car ride up to the hill station was breathtaking and up here is no lesser. I do not feel threatened in any way while traveling to Chandragiri.”

According to Adhikari, the government is undeterred by its aspirations to welcome 5 million tourists by the year 2030 and 1.5 million by 2020. “Rather than worrying about a drop in remittance income, it is important that we expand the tourism sector aiming for this industry to contribute to a quarter of Nepal's GDP,” he added.

Minister Pokharel urges to invest in agriculture and tourism

No decision on home ministry leadership until full text of SC’s verdict on Rabi Lamichhane is out: PM Dahal
12 hours ago