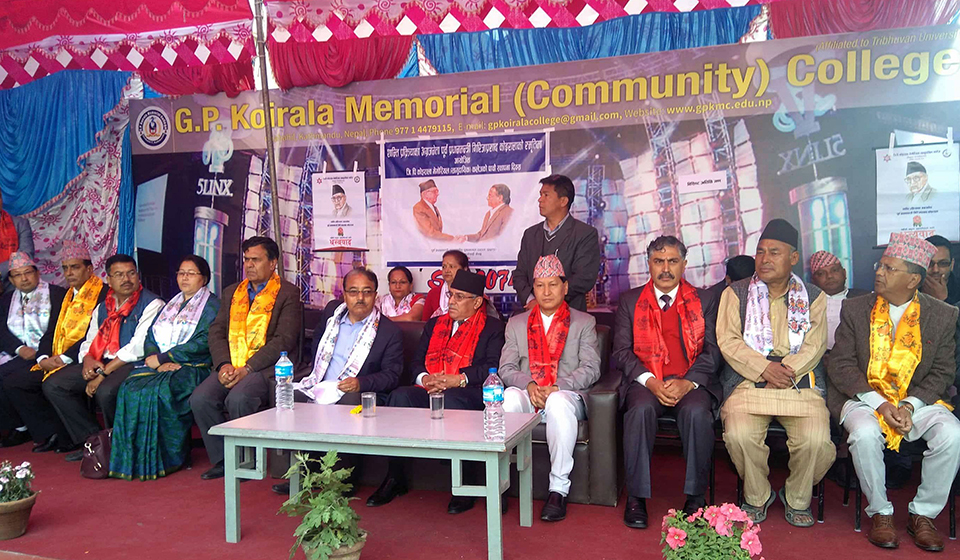 KATHMANDU, March 21: CPN (Maoist Center) Chair Pushpa Kamal Dahal has said that the late Girija Prasad Koirala is the guardian of all Nepali.

Addressing a program organized to mark the fifth establishment day of Girija Prasad Memorial College on Wednesday, he said the late Koirala is not the guardian of only the Nepali Congress but a guardian of all the Nepali as a statesman.

He also urged the program organizers to call him in every program concerning Girija Prasad Koirala.

"Any program organized by institutions, organizations and colleges established in the name of Girija Prasad will be incomplete if I am not invited. Call me to the programs organized in his name since an extraordinary relation was established with Koirala while joining the peace process," he said.

Recalling that he used to have the conversation with Koirala for up to an hour daily from Rolpa, Rukum and Delhi, India for ushering in republicanism in the country, the Maoist Centre chairman urged all to adopt peace, consensus and collaboration for fulfilling the Girija Prasad Koirala's dream.

He said taking the country towards economic prosperity through constitution implementation was the need of the hour and all the political parties should be united despite political contradictions to spread light at every house.

"The ruling and the opposition parties should work in unison to chart out a new journey of development and prosperity for the country in the same way the Congress and the Communists came together and became successful in abolishing the autocratic Panchayat system and monarchy," he exhorted.

Mayor of Kathmandu Metropolitan City, Bidya Sundar Shakya, said the students should also work to beautify the city, adding that the KMC has started taking stern action against those littering the city.

Tribhuvan University vice-chancellor Prof Dr Tirtha Raj Khaniya said his priority was to promote community colleges. He also cautioned the Legislature-Parliament to take an arbitrary political decision about the Tribhuvan University, alleging that the parliament has started making laws related to it without consulting the university.

Founding chairman of the College, Bhimsen Das Pradhan, said the college had been set up with the goal of fulfilling the late Koirala's dream that all should have equal access to education. He said that all the parties should stress on consensus, collaboration and unity as pointed out to by the late Girija Prasad Koirala.

Campus Chief Khilanath Sapkota said the college has been providing education to the students from the economically poor and marginalized communities free of cost. The college has 1,300 students. RSS