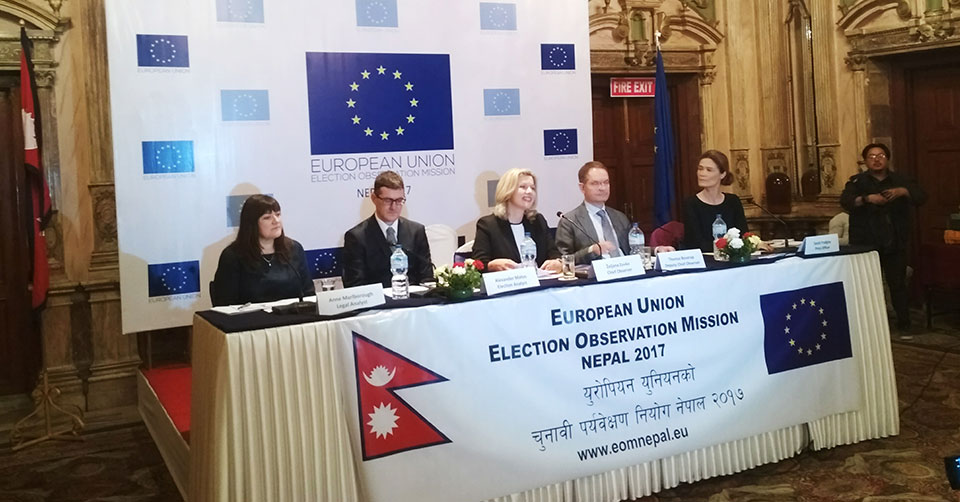 Unveiling a final report on Tuesday, a-five-month-long mission, that spent around Rs 3.5 million Euro during the election observation in Nepal, said that the Election Commission failed to provide sufficient information on polling center turnout and invalid votes.

Zeljana Zovko, Chief Observer of the EU EOM, however, lauded the election process saying that the 26 November and 7 December elections represented a key milestone in the implementation of the 2015 Constitution, with the legal framework providing a good basis for the conduct of the elections.

She further said that the political freedoms including the right to vote prevailed during the election campaign, despite a series of violent attacks against candidates.

EU Election Observation Mission has submitted its final report along with 29 recommendations today stressing that first-past-the-post constituency boundaries be reviewed to ensure more equal suffrage, law be enforced in order to stop vote-buying and EC’s transparency be enhanced.

The EU EOM was present in Nepal between 25 October 2017 and 3 January 2018, following invitations from the Government of Nepal and the EC.

The EU mission, that observed elections in as many as 63 districts, had been alleged to have breached its jurisdiction by seeking information from the Kanchanpur District Court.

It assessed the extent to which the electoral process complied with international and regional commitments for elections, as well as with the laws of Nepal.

In total, the mission deployed over 100 observers from all 28 EU member states, as well as Norway and Switzerland.