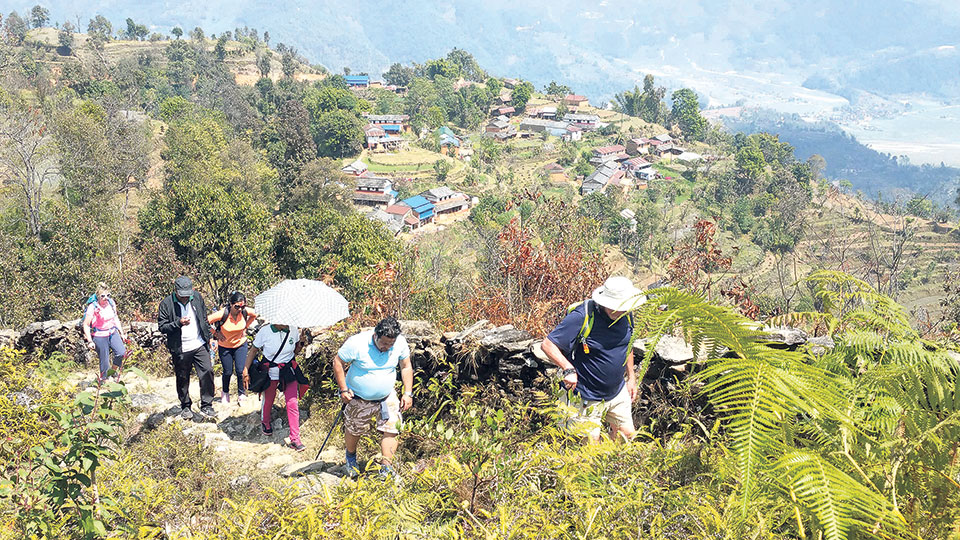 POKHARA, March 20: Trekking Agencies Association of Nepal (TAAN) Western Regional Association has introduced a new trekking route from the popular Fewa Lake for tourists willing to experience the beautiful view of Annapurna mountain range, paragliding flights from Sarangkot and the local lifestyle of the villagers.

With this five-hour route, tourits  will get an opportunity to experience the life of local villagers along with the natural beauty of lake and mountain.

The eight-kilometer route begins from Chapakot. From there, it continues along Ghaderi, Palaiche and ends at the Bhumdikot, said Dipak Raj Adhikari, president of TAAN Western Regional Association. “Tourists can experience the life of villagers, enjoying the view of Fewa Lake in the eastern side and mountain range in northern side,” Adhikari said, “This could be the perfect tourism product for people who come to Pokhara and like to go on a short trek.”

“This route can be operated for two days and if the route can connect to the Panchase. Then it could be of more than two days,” he added. “It can be promoted as an ecotourism venture. Moreover, it is a safe route and there is no problem for accommodation as well.” TAAN is further planning to provide necessary training to locals of the area in order to bring the route into operation sooner. Likewise, TAAN is also preparing to put sign boards in different places along the route.
“Old trekking routes are being destroyed by the motorway. This route can benefit both villagers and trekkers,” Adhikari said.

According to him, almost 70 percent of total tourists arriving in Nepal come for trekking.
Talking to Republica, Kedar Nath Sharma, president of Pokhara Tourism Council, said: “This is the perfect route. It would be better to operate it for one night and two days.”

He, however, said that few infrastructures such as restrooms, water taps and resting places are needed to be built for the trekking route.

Surya Thapaliya, chief of Nepal Tourism Board, Pokhara, also said that the Pokhara-Lekhnath Metropolitan City was waiting for promotion of the trekking route inside the metropolis.

BENI, Oct 16: The trekking route along the Annapurna Conservation Area is being shorten with the rampant construction of trial roads. Read More...

Fugitive arrested from his house in Jumla
22 minutes ago