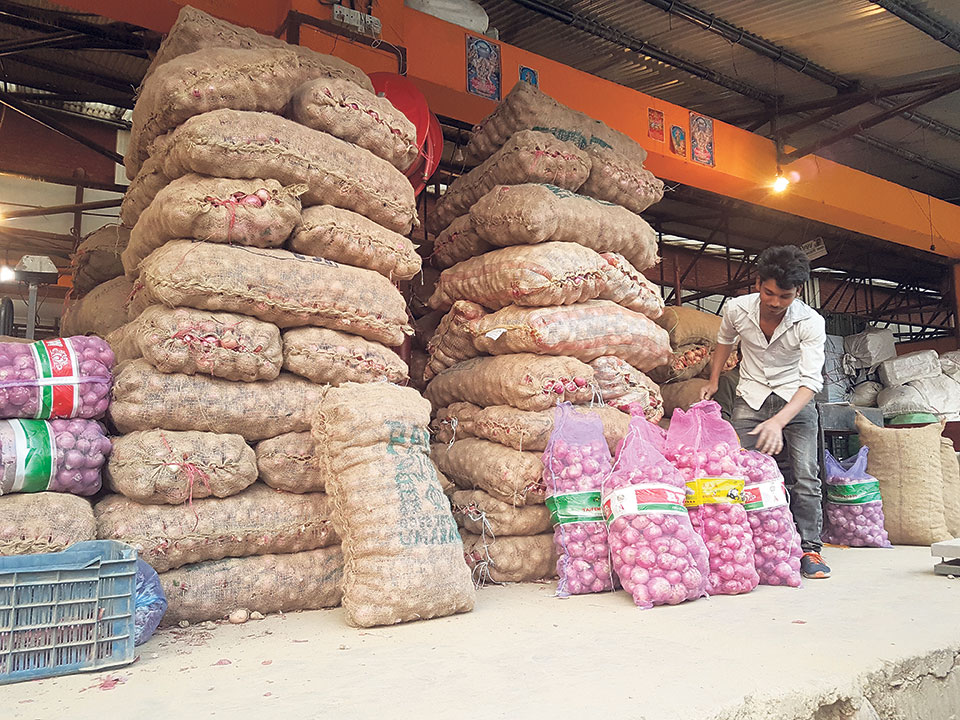 KATHMANDU, March 19: The price of onions has plummeted over the past week in the Kathmandu Valley. The wholesale price for a kilogram of onion hovered around Rs 33 and Rs 35 last Sunday at the Kalimati Fruits and Vegetable Market. This Sunday, the price went down to an average of Rs 30 per kilogram.

The wholesale price of onions in the market was the lowest on Sunday in comparison to the last eight months according to statistics of the Kalimati Fruits and Vegetable Market Development Committee. The average price of onions lower than this was seen last on July 29, 2017 when the price hovered between Rs 25 and Rs 27.

Ram Hari Dahal, an onion trader at the Kalimati market, told Republica: "I have been selling onions for Rs 30 a kilogram when the costumer purchases a 20 kg sack of onions, and this is Rs 4 lesser than the rate I use to sell onions a week ago."

Similarly, Lok Bahadur Chaudhari, who had been unloading a truck of onions at the Kalimati market premises, stated that the price of a kilogram of onions while purchasing in a bulk hovers around Rs 29 after a fall of price by four to five rupees. He added: “The fall in price is due to the increased supply of onions in southern Nepal and India. Previously, due to the policy of the Indian Government to limit the export of onions and the unfavorable weather conditions for onion production, the supply of onions was limited, now with favorable conditions, the price of onions has fallen.”

Binaya Shrestha, deputy director of the Kalimati market, gave seconds to the claim of Chaudhari. “In recent days, there has been a fall in wholesale price of onions by nearly Rs 5. A majority of onions available in the Nepali market come from India. The supply of onions on this time of the year is usually high in the Indian market causing a plummet in price of onions in the Nepali market following the same across the border in India,” explained Shrestha.

KATHMANDU, Feb 27: A total of 105 people lost their lives to road accidents in the Kathmandu Valley in the... Read More...