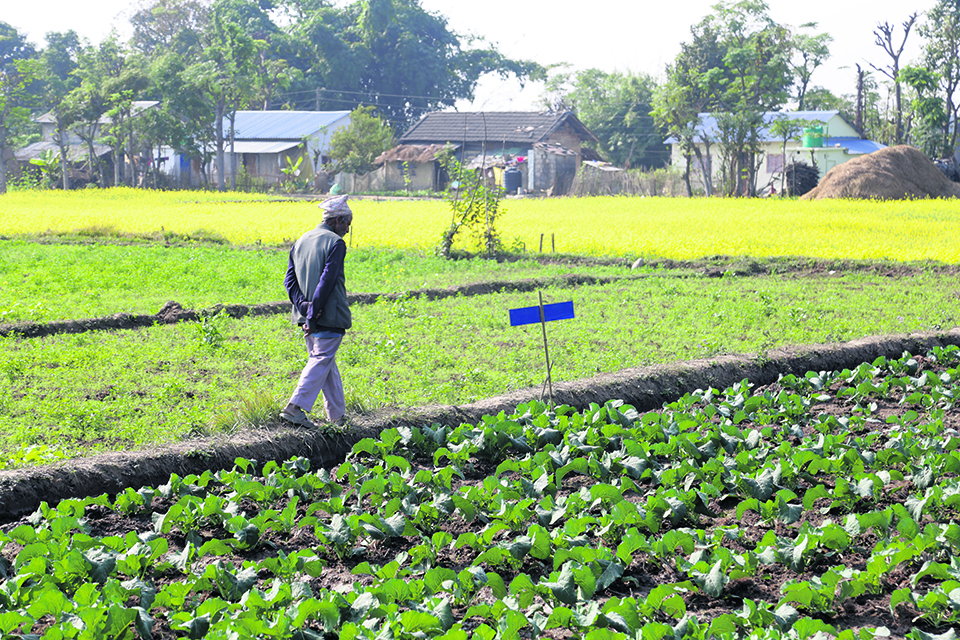 Nepal has been grappling with a number of challenges in farming since long. It is still considered as an agro-based country, but 43 percent of its farmlands, which is roughly 1.3 million hectares, remain uncultivated. As the domestic production is not sufficient to meet the burgeoning demand, food import is on the rise. And there is lack of sufficient healthy food. Foods imported as well as produced domestically often contain chemicals that have dangerous consequences on health.

A recent study on the patients coming to Cancer Hospital in Chitwan revealed that a large proportion of them are farmers using pesticides and other chemicals in farming. As they use these chemicals and apply on crops and animals without safeguard measures, the chances of adverse effect on public health and animal are always high.

Why does a vast stretch of farmland remain fallow?  There could be three reasons: Farming is still not a profitable business enterprise, market is not certain, and those working in the farm are not accorded respect in the society.

Youths may see several benefits in going overseas for work, especially the opportunity to earn more. Lack of incentives from the government, low productivity and existing social attitude towards farming has motivated the productive youths to leave the country for employment.

The power, wealth and comfort that come from working in the public institutions encourage many parents to have their children do white-collar jobs. There was an adage ‘uttam kheti, madhyam byapar and nimna sewa (farming is best occupation, followed by business; and, ‘service’ is the lowest occupation). Education was perceived as a pathway to move out of farming. However, the situation has changed now.

It is mainly due to perceived lack of employment opportunities that youths are going overbroad. Every year, about half a million youths are going abroad for work, and this has brought remittances worth millions of rupees every day. When a country moves towards industrialization, it is natural that people from rural areas migrate to cities to work in non-farming sector. This is what happens normally across the globe. But in Nepal, industrial sector has not really grown, and does not provide much non-farm opportunities.

According to the economists the income obtained as remittance has been contributing to the economy and has helped to import goods and services including food. Nepal currently imports foods worth about 120 billion rupees a year, and this import is growing at a faster pace.

In this context, the new government needs to bring out policies and programs that ensure good return to the farmers. For young people to stay in farming, it should both be attractive and remunerative. The average size of farm for a family is roughly 0.6 ha. It is often difficult to generate high income from such a small farm to meet the aspirations of the young people. Accordingly, farming should also be combined with other sources of income. One of such sources could be farm tourism. Farming could be linked with tourism like in Bali, Indonesia. Both foreign tourists and Nepalis from urban areas would find a stay in farm. People from urban areas might visit farm as tourists for few days during which they might even work. Agro-ecotourism can become a potential source of income making small farms viable.

Organic or ecological farms generally attract more tourists. Working in an ecological farm is now considered to have healing-effect for both physical and mental health problems. There is also a growing trend of tourists staying in such organic farms. Because of higher demand, especially from wealthy families in urban areas, organic food products fetch higher price. Another way to develop farming is through proper market channel and supply-chain management which could help farmers get competitive price for their products.

The present land tenure regime has also been an obstacle towards the use of fallow land. The land-owners, who do not cultivate their land, feel insecure to lease out the land to a potential cultivator interested in undertaking farming. The existing provision of land- ownership and land management has rather prompted landowners to leave the land uncultivated.  Most of these landowners are small land-holders who have given up farming because of migration of their family members.

Public support is a must to promote proper land management. Besides, social awareness is equally important. Public awareness should be generated for the effective and meaningful utilization of land. Every individual should know that production and consumption of healthy food will reduce medical cost. A new concept of paying farmers for providing ecosystem services is currently under the debate at policy level. Such a concept should be aimed at providing a stable income for farmers, which will make the farmers rich and encourage them to adopt sustainable agriculture for long-term benefits. Public support will be crucial in retaining youths in farming thereby contributing to better food security.

NEPALGUNJ, April 17: A large number of farmers in the villages around Nepalgunj are overjoyed with their new-found love. They have... Read More...

Making a great first impression at an interview

When you’re prepping for an interview, your focus is probably on the tough questions you’ll face, the thorough responses you’ll... Read More...