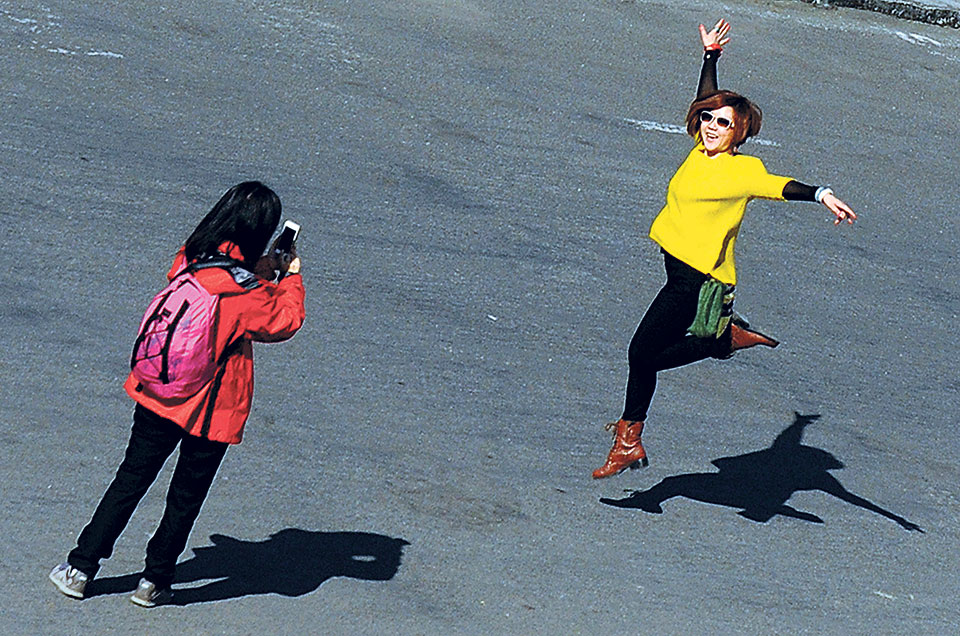 A tourist poses for a photograph. ( Republica file photo)

POKHARA, March 16: Turkish Airway's airliner had an accident at Tribhuvan International Airport (TIA) about three years ago.  All the passengers in the aircraft were unharmed. However, as the plane remained grounded at TIA for a few days, larger aircraft could not approach the runway, which affected the tourism sector greatly as the tourist season in Nepal was approaching.

The US-Bangala aircraft succumbed to a terrible tragedy just as the tourist season has started. While dozens of lives were lost in this accident, the conversation between the pilot and the air traffic control was leaked across the media. The audio leak has raised questions about airline safety in Nepal, which can greatly hamper the tourism sector of Nepal, say tourism entrepreneurs.
“The air crash will prove to have detrimental effects in Nepal's tourism sector,” said Kedar Nath Sharma, president of Pokhara Tourism Council (PTC) during an event organized to discuss the threats that the air crash could pose towards Nepali tourism sector. “In the aftermath of air crashes in Nepal, false rumors about Nepali aviation sector have spread across the media. Tourists easily buy these rumors and this has kept the tourism entrepreneurs of the country at a receiving end,” he added.

Sharma said how the lack of an alternative international airport has affected the country's tourism sector.

“Following the accident of the Turkish airliner, the TIA runway could not accommodate larger aircrafts. This closed the doors for international tourists coming via flight for a few days," Sharma said. "The current leak of the audio record of the conversation between the pilot and the ATC has further tarnished the government image in Nepal."

Currently, the rumors of the lack of safety provision has spread across the globe, and due to a lack of alternative international airport, there is no way we can offer an alternative safe place to land.”

During the event, tourism entrepreneurs expressed their discontent towards the lack of government effort in debunking these rumors. “The air crash was solely an accident, and not in any way was it predefined or due to some infrastructural problem, this is something that has to be made clear by the government,” stated senior tourism entrepreneur, Ganesh Bahadur Bhattarai.
"The audio tape leak cannot be termed as a defect in the Nepali aviation sector, which the government must make clear,” Bhattarai added.

Bhattarai expressed his discontent toward the long time that the government has given to investigate on the tragedy, stating that it would lead to a snail-pace work. This raises questions as to whether the investigation is being conducted solely for the sake of formality, he added.
“In the immediate aftermath of the accident, the social media was heavily misused and the government showed no interest towards curbing the publicity of the audio visuals and images. It has made tourists willing to visit Nepal think twice," added Bhattarai.

Former president of the board, Surya Bahadur Bhujel stated that there has been no positive publicity of the country, while negative ones have hit the media time and again. “Tourism is a very sensitive topic and no one has shed light on the effects of minor events in this field. Only negative news about the lack of safety over the Nepalese airspace has been shed light upon, and the government has turned a blind eye towards correcting the global perspective,” added Bhujel.

Knowledgeable sources from a number of different back grounds seconds to the claim of Bhujel and Bhattarai during the event and stated that the immense publicity of the aircraft accident along with its cause and aftermath has discouraged tourists to visit Nepal in light of the negative publicity that has spread across the media as wildfire.

Fugitive arrested from his house in Jumla
28 minutes ago