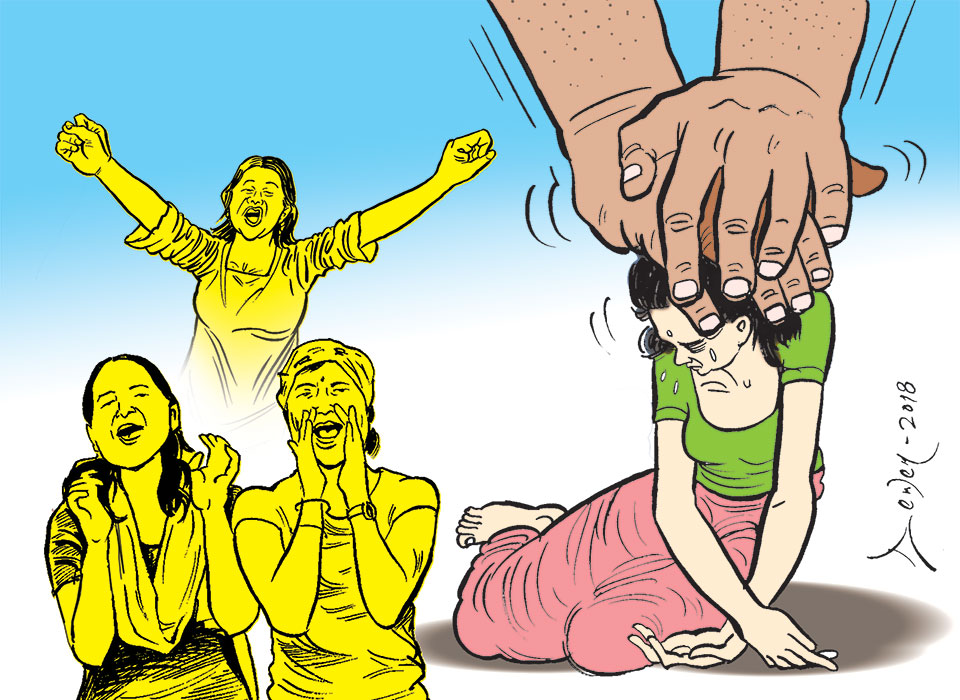 Many watched the video of Radha Chaudhary being beaten mercilessly for practising ‘witchcraft’ with horror. It was the sort of clip that I would normally go out of my way to avoid if I weren’t writing this article. While the whole video is undoubtedly chilling, the reactions of most folks watching it, I suspect, were one of pure anger. It was infuriating to watch all the village people treat it like a travelling circus – just sitting there and, presumably, enjoying the show. It transpired later that they were afraid of ‘Bholebaba’ aka Ram Bahadur Chaudhary who they thought had special powers. Despite our incredulity, this sort of ignorance and irrational belief persists even today driven on by superstition, illiteracy, religious leanings, and a host of other factors.

Here we are on the cusp of an era harboring dreams to be a developing nation and there in our hinterlands we have these regressive practices. While its existence is not a surprise, the importance of deterrence in the form of official action cannot be understated. That the incident happened on International Women’s Day – the slogan for which ironically was ‘Press for Progress’ – is an unfortunate coincidence and did not make it any more appalling than it already was. It is this fact that may just help Radha get justice in the end – if the administration is serious about dispensing it.

Which brings me to the administration and their response to this shameful incident. Surely, the police must have seen the video? You would think that, after watching it, the police representatives would have done something against the perpetrators. What the police instead try to do on their first attempt – in a relatively open and shut case mind you – is to broker a reconciliation. It is only after public anger mounts against the perpetrators that they decide to swing into action. Sure, they don’t want any trouble and maintaining peace is important but if they are not going to enforce the law, then who will?

Our police are not exactly known to cover themselves in glory when it comes to investigating and taking action in cases involving atrocities against women. Take for example the rape cases in Itahari and Kathmandu. In both these cases, the police advised the parties, rather shamelessly to reconcile their differences. I think they are starting to take the ‘Police, my friend’ slogan far too literally. If this was their approach to well-publicized cases of sexual crime, I shudder to think how they normally handle cases of domestic violence.

It’s one thing to attempt to reconcile parties in cases of traffic accidents (and anyone who has been involved in minor skirmishes will tell you that), but quite an entirely different story to try it with crimes of a more serious nature – rapes and then these beatings. It is simply a case of evading their duty and responsibility.

The local police, even after arresting the perpetrator were compelled to let him go due to the intervention of the local government. We recently chose our government representatives with much fanfare and perhaps got what we deserved – the same old lack of accountability. Granted some places of Nepal are like the wild wild west with little or no government and administrative influence but, even then, the response of the local government was shocking.

It is perhaps a measure of people’s frustration that the local mayor was attacked soon after and finds himself in a hospital bed with ample time to mull over his chosen course of action or, in his case, inaction. It is precisely this sort of inaction that makes the public side with these vigilantes, no matter how abhorrent their means.

It is almost always women who bear the brunt of ignorant and abhorrent practices in our country whether it is to do with menstruation, being accused of witchcraft, black magic, bringing bad luck or myriad other social ills. And it is these ‘babas’ that feed on these groundless fears to exploit women. If you go back to any recent baba scandal, it has always been about exploiting women and subjugating them. It has surfaced only now that even Ram Bahadur Chaudhary has a history of exploiting girls and women – empowered by the ignorance of the villagers and administrative apathy.

The government, all tiers of it, must now coordinate to take stern action in this particular case, if only to set an example to deter would-be-women-beaters and exploiters. There’s no point in having women’s rights, welfare, quotas and preferential treatment, a woman president, and a multitude of female lawmakers, if this type of mentality is allowed to exist and thrive. All the pride that we take in the supposed advancement and progress of women’s rights in this country can quickly be dispelled by one look at this video.

One could claim the best thing federalism brought to Nepal is speedy development. No matter which corner of the country... Read More...