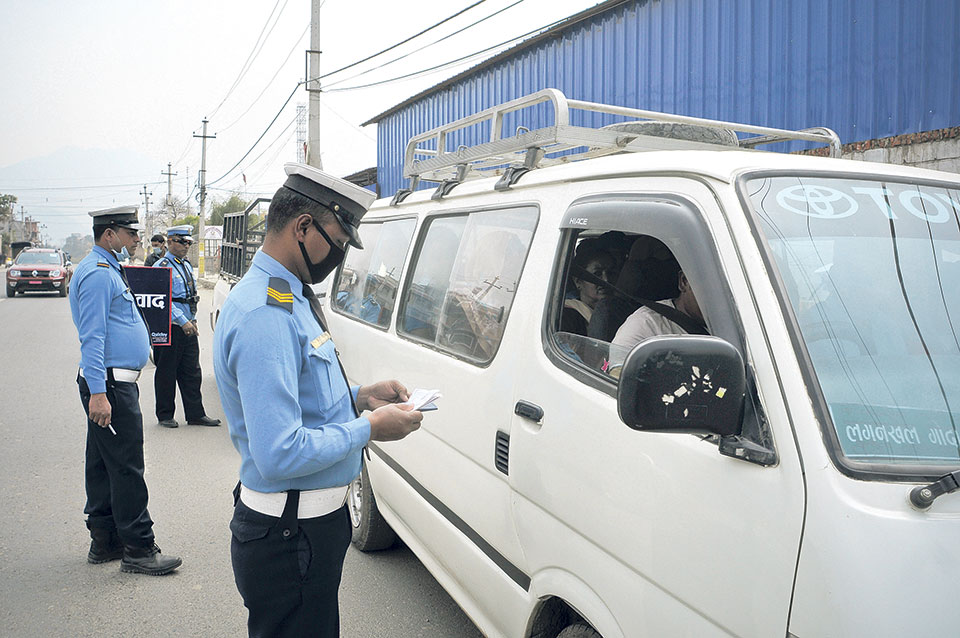 Traffic police personnel check the documents of a public vehicle at Satdobato, Lalitpur, on Thursday, as a ban on 20-year-old vehicles came into force. Bijay Gajmer/ Republica

KATHMANDU, March 16: The government on Thursday took 59 public vehicles under its control from different parts of the country, as a new rule to ban public vehicles older than 20 years kicks in.

The vehicles were seized by transportation offices across the country in coordination with traffic police personnel.

According to officials of Department of Transport Management (DoTM), Narayani Transportation Management Office seized 25 of them, while the offices in Gandaki and Janakpur took under their control 10 and seven such vehicles, respectively. Remaining vehicles were seized by other zonal transport management offices.

An official of DoTM said that the decision was implemented effectively across the country.
The government had taken the decision to put a ban on public vehicles older than 20 years in 2015. The decision has come into effect from Thursday.

DoTM has also collected details of public vehicles older than 20 years from transport offices across the country. Earlier, it had told its subordinate offices to furnish to it the details of vehicles older than 20 years registered with their respective offices by Tuesday.
Officials say that it could take the department about a week to compile the details sent by its units across the country.“

"Our staffers at transportation offices across the country are working in coordination with the traffic police to implement the ban effective”y," Tulsi Ram Aryal, director of DoTM, said. "We are still collecting details about all the vehicles older than 20 years in the country. Nevertheless, the ban has come into effect from Thursday as planned."

Aryal said that the government will not hesitate to seize and scrap public vehicles older than 20 years if they are found plying the road“. "The scrapping charge will have to be borne by the owners themselves. We will also recover outstanding dues, if there is any, from the owners," he added.
Environmentalists have lauded the efforts to put a ban on old vehicles, stating that it would contribute in reducing pollution. Bhushan Tuladhar, an environmentalist and technical advisor for South Asia, UN Habitat, has said that the ban on public vehicles older than 20 years will reduce pollution, but not to a greater extent. "Old vehicles have older technologies which are not much environment-friendly. Moreover, vehicles are not maintained well in Nepal," said Tuladhar“. "So, it is clear that the ban on old public vehicles will reduce pollution. But that will not be very much contributing if we look at the extent of pollution currently."

Meanwhile, transport experts have said that such ban would contribute in reducing fuel consumption in the country. "The older a vehicle gets, the more fuel it consumes," said Tulasi Sitaula, a transportation expert who also served as the secretary of the Ministry of Physical Infrastructures and Transport. "In a country like ours where vehicles undergo less frequent maintenance, older vehicles become fuel inefficient."

Fossil fuel is the country's largest import. Nepal imported petroleum products worth Rs 140 billion in FY2016/17, according to a data of Department of Customs“

"Ban on gas-guzzling old public vehicles will definitely reduce fuel consumption," added Sitaula.
DoTM has estimated the number of public vehicles older than 20 years at around 5,500.

KATHMANDU, May 4: Police have arrested as many as 14 transport enterpreneurs from Dharan and Itahari, Jhapa following Home Minister Ram Bahadur... Read More...