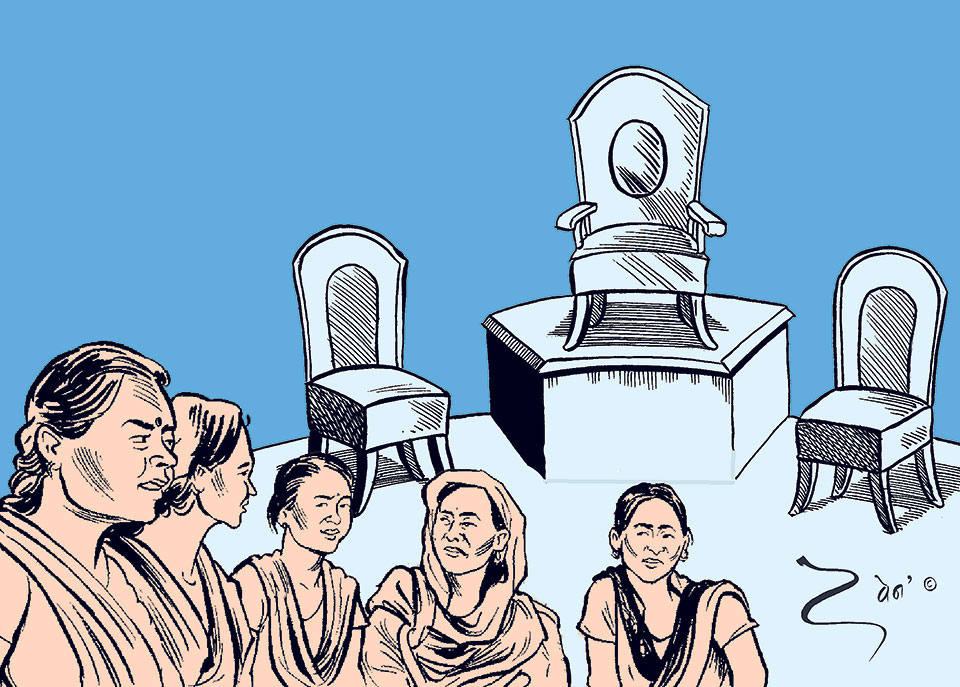 Risal has been practicing journalism for the past seven years. She writes on social issues, social media, IT and literature. Currently, she is associated with Nagarik daily.
news@myrepublica.com

Many people were killed in charge of practicing witchcraft. Those cases were resolved most probably with milapatra

It’s the 21st century. The world was celebrating “International Women’s Day” on March 8. There were march passes, banners, social media posts. Everything that normally happens in a celebration for the sake of formality.

And then the reality struck.

The girl named Radha Chaudhari (20) was being publicly thrashed, molested and accused of being a Boksi—a witch. The whole community came to thrash her with whatever is handy. Nothing happened until the video of the incident went viral. Then, everybody lost their cool. Everybody “woke up”. There is this rage all over now. People are demanding punishment from life imprisonment to death sentence to the accused. I am pretty sure this story will also fade away like every story of this kind normally does. These are the trending times. You watch what trends in YouTube. You follow trending hashtags in Twitter and Facebook. When the trend ends the story ends.

But stop. Do you even think of what happened to those who suffered those accusations? Or what happened to those who committed those horrendous crimes? The ones who suffered the violence are still to get out of the trauma. The others who committed the crime are still walking freely without a bit of guilt in their face. Do you know why? Because of Milapatra—reconciliation—the only “solution” the investigation department thinks of.

Many people were killed in charge of practicing witchcraft. What about them? Those cases were also resolved most probably with milapatra.

It suffocates me. Every bit of the story makes me cringe. I don’t blame only the government or the police. In most of the cases of witchcraft accusations, people of the same family are involved. Witchcraft is used to exact “revenge” against the poor and the weak. How pathetic!

Many of you were acting as if you were watching a soap-opera live. The girl was crying, begging for help. And what did you do? You applauded. Didn’t a part of your heart cringe for a while? What made you enjoy the sight? You were filming as it happened as if you were the director and the producer of live “soap-opera”. Didn’t anybody of you have the courage to stop that insanity? You are equally responsible for what happened.
And what makes me burst in tears is the involvement of women in that horror. How could a woman do that to another woman?

Why can’t we “the media” and citizens just stop writing stories and then archiving them after the “trend” ends? Make it trend always. Prove that we are capable of making a change. Prove that we can stop girls and women from being killed/harassed and molested. If not the government, we can.

Social media activists, will you post just for the sake of posting? Mandala is not the place to go with your banners and printed t-shirts. Go to Kailali now and protest. Compel the government to make stricter rules. Hashtags do not change anything.

Provide me updates now. What happened to Sayara Khatun, 55, who was accused of witchcraft and mercilessly beaten on September 22, 2016? Is she well now? Are the ones who beat her up walking freely or are they inside where they belong? Where is Amrita Khadka, 66, who suffered the same fate on April 18, 2013? Is her son, Tej Jung Khadka, who beat and mistreated her in name of “Boksi” inside the bars? Or has he become a politician? Tell me about the family of Dandi Tharu, 40, who was killed by Dinesh Tharu in similar accusation on August 24, 2016. No you won’t provide me updates, you advertising freaks. That is not the type of story that generates you revenue.

Sincere people working in media, give me information on how Jaitun Nesa, Tirthamaya B.K., Rajkumari Upadhyaya, Laxmi Pariyar (she lost her life), Parbati Chaudhari, Pramila Shakya (accused and mistreated in Kathmandu itself), Laxmi Dhami, Kopila Baniya, Renu Devi Jaysawal and all other people whom you reported but never provided follow ups. Give me updates.

There might be thousands of such cases which are yet to be known. And the happening is equally terrifying. I won’t say “God save the women”. We should. We need to upgrade our thoughts. We should police each other. We should raise voice every day. This is a big issue. Make it heard.

Love is not enough to bind people together

My City Narratives: Heart to heart with Malvika ... Read More...

Madhav Nepal is not on right path: Bagmati CM Shakya
9 hours ago

Madhav Nepal is not on right path: Bagmati CM Shakya
9 hours ago
Current govt is an alliance of greedy sinners: Rayamajhi
10 hours ago