History repeats, as a farce 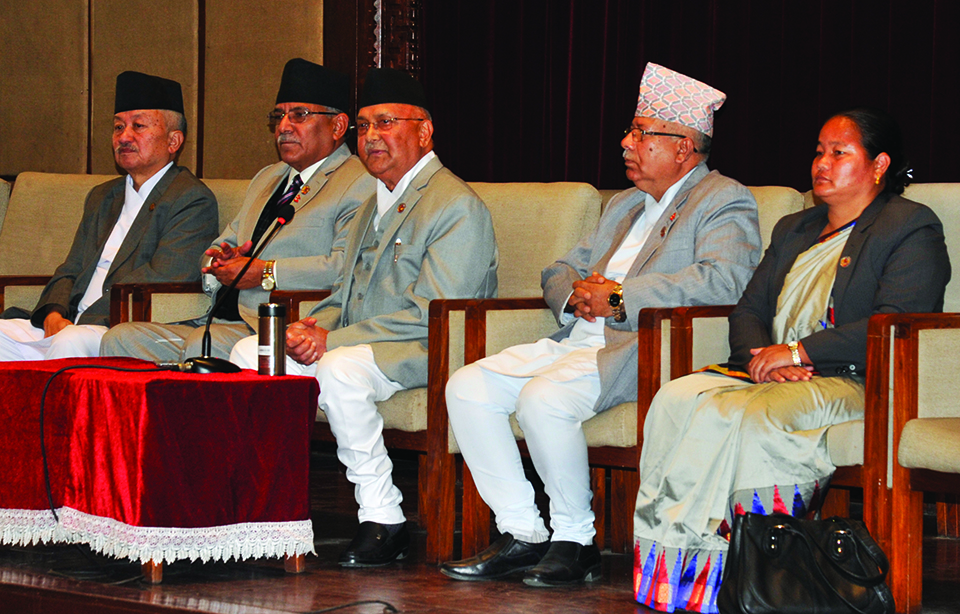 As Nepali politics gears up for yet another farcical fall and rise, the door has been left wide for a group to step up and become torchbearer of progressive politics

I cannot say what Hegel and Marx would have said about Nepal. But if there is any country where this statement has held every bit of truth through the ages, it has to be Nepal. CPN (Maoist Centre) and its Chairman Pushpa Kamal Dahal Prachanda are some of the bigger casualties of this prophetical statement. The fall of CPN (Maoist Centre) following the dissolution of first Constituent Assembly and its electoral failure in second CA elections were certainly tragic turn of events. The Maoists led by its charismatic leader Prachanda were being looked upon by the oppressed communities and even by the general public as a beacon of hope, as the force that can bring substantial change in a country plagued by backwardness and inequality. This made their fall very tragic.

But both the party and its chairman have found new life now. The Maoists did quite well in federal parliament, provincial assembly and National Assembly elections, thanks to an electoral alliance with one-time sworn enemy CPN-UML. And as talk of unification between the two parties comes to a conclusion, Prachanda once more has the chance to lead what would become the largest party of the country. But this rise is nothing but farcical.

The Maoists are all set to merge with a political group that has stood as an antithesis to all aspirations of inclusion and social justice. And the new Chairman Prachanda will be a far cry from the one that emerged victorious following the 2008 Constituent Assembly elections. No longer will he be considered as the messiah of the oppressed. He will be to his old self what Napoleon III was to Napoleon Bonaparte, an inferior farcical copy.

The 2008 Constituent Assembly elections had also given rise to another political force that advocated for inclusion and change. The Madhes centric parties faced similar tragedy following the dissolution of first CA. They fared poorly in second CA polls. With their rise following success in the recent elections, they were looking like the only political force that could free the country from this jinx of tragedy and farce. But both Federal Socialist Forum Nepal and Rastriya Janata Party Nepal have supported Oli’s government. Both look keen on joining the government led by him.

These Madhesi leaders were sent with a clear mandate in the first CA: they were there to speak on behalf of Madhesis among other marginalized groups. The assembly dissolved and they were defeated in the second CA elections.

Their failure was tragic. But they were articulate enough about their reservations regarding the new constitution and did very well by sticking to their demands on amendment. The best thing they did to themselves was that they did not join any following governments, unlike many leaders and parties who despite their objection to many constitutional features like secularism, federalism, republicanism, took major ministerial portfolios in almost all post-constitution governments.

This paid off in local, provincial and federal parliament elections. The two Madhes based parties got substantial seats in federal parliament and became the ruling coalition in Province 2. It would be fair to say that they redeemed themselves and their movement to a certain extent through last few elections. But then the tragedy has struck again. They have decided to join the government on the basis of few flimsy points of agreement made on a piece of paper.

FSFN might well be the ruling party both at the centre and in Province 2, but its new rise just like that of Maoists and Prachanda, will be no more than a farce. If FSFN and RJPN do not remain united it might give birth to a lot of complications and repercussions.

First, Madhesi people still have disagreements and dissatisfactions over the constitution, as made evident by the seats won by the Madhes centric parties in the region.  The Madhes centric parties also carried aspirations of indigenous nationalities and other marginalized communities, for the Maoists have turned into a huge disappointment. They have let down the oppressed masses by merging with a party that isn’t keen on issues faced by Madhesis, indigenous nationalities, and other marginalized communities. The Madhes centric parties were the last glimmer of hope for these communities to fully establish their aspirations through constitution amendment. Hence, it was necessary for Madhesi force to not lose focus and stay strong with their demands.

Madhesi parties’ failure to keep their promises can open doors for more radical extremist factions, which will never be in the country’s long term interest. Also, them ending up like this will be tragic not only for people of Madhesh or indigenous nationalities, but it will signal the demise of discussions and deliberations on discourses about race, nationality, gender, language and ethnicity—things they brought to the table and things which are very much necessary for a functioning pluralistic democracy.

Looking at current politics, it is fair to say that the prospect of progressive politics is bleak. The Madhesi alliance was all set to carry the torch of struggle for identity and equity. But as Nepali politics gears up for yet another farcical fall and rise, the door has been left wide for a group to step up and become torchbearer of progressive politics.
Nepal still needs a good amount of restructuring and remodeling to be done to fulfill demands and aspirations of people who took part in People’s War, People’s Movement II, Madhes and Tharuhat uprisings. With the Maoists sold out and the Madhesi alliance dismembered, the country now needs a new political force which will rise up to the occasion and work to make the country more inclusive place for all to live in.

The son of a wealthy landowner, Fidel Castro turned his back on a life of privilege to lead a left-wing... Read More...