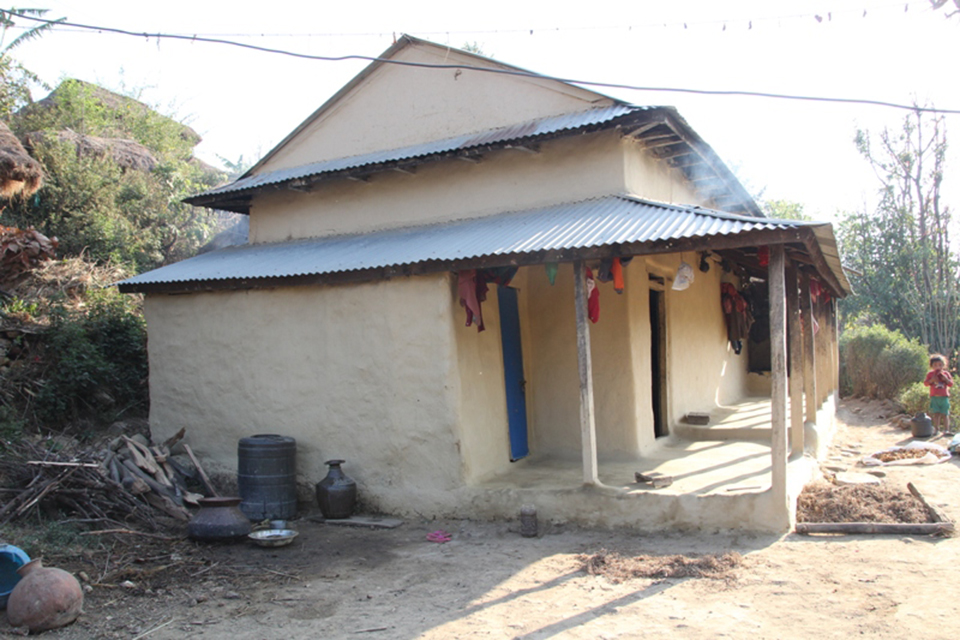 A house in Tinau Rural Muncipaliy-4, Palpa. The house, like other houses in the village, has a separate room (with blue door) for menstruating females of the house. Muktiprasad Neupane

PALPA, Mar 12: Pushpa Rana does not go to school during menstruation. The eighth grader stays at home the whole five days because she is not allowed to use toilet in her school during her periods. According to her, menstruating girls have to sneak into jungle to relieve themselves, which she does not like at all. Rather, she finds skipping the school a better option. Ironically it may feel, her locality, Tinau Rural Municipality - 4 is officially designated as an 'open defecation free zone'.

“If we use school's toilet during menstruation, we are insulted in front of all. We have been told not to go use the school toilet during periods. So, girls have to go to jungle to relieve themselves,” Rana said. “But then, I do not go to school at all during such times. It is better to stay at home,” added the student of Prithik Prakash Secondary School.

Skipping school and remaining at home does not make her feel great anyway. Even at home, she has to stay isolated all five days of menstruation. She is not allowed to go to the kitchen, or other rooms of her house.

“I can't have a normal life during such time. I am not free to move around my own home. This is a very old traditional practice, we can't challenge it,” she lamented.

Menstruating girls and women in her village are kept away from public taps, temples and other public areas. If anyone is found to be going against this 'rule' they are ostracized.

“At least in our house, we should be given the liberty to live a normal life. But even family members do not tolerate breaking such dated traditions,” she said.

Rana however personally feels that such things are ill practices. She even believes that the new generations should abolish such practices. But 'hurting' grandparents or parents is 'hard'.

“Such discrimination does not make us feel good. We discuss among friends that we must break such ill practices. But we cannot offend our elders, that costs a lot,” she stated.

If menstruating girls use the toilet, they will touch the water and make it impure. Therefore, it is better that they to jungle during periods. -Purna Bahadur Darlami, A resident of Koldanda village

Rana is even aware that girls need extra care during menstruation. They should stay cleaner and healthier, she said. But due to the lack of social support, girls are being deprived of even basic facilities, she stated.

“They say this is a tradition that came down from the 'god's time'. They look down upon us when we menstruate. Even educated people are not ready to change their mindset, let alone illiterates,” she said.

Chhaupadi is thought to be prevalent in some parts of the Far-western districts like Achham, Doti and Bajura, among others. However, the practice is found elsewhere also. In Palpa too, areas like Koldanda of Tinau Rural Municipality is one of such core areas where women are kept under strict restrictions during menstruation. Like elsewhere, they claim that they have a compelling reason for it.

“Here we have strong belief that the temple nearby, which is the temple of goddess Satyawati will be angry if we do not follow cultural guidelines on menstruation.  There is Satyawati lake, and its temple. We revere it,” said Purna Bahadur Darlami, a resident Koldanda village. “When girls or women menstruate, they are not allowed to come here. It will invite bad fortune for all. Therefore, we restrict their activities at home and elsewhere,” he added.

According to him, restriction for women in toilet is not a surprising matter. In fact, he asserted that women themselves would be very careful about it.

“If menstruating girls use the toilet, they will touch the water and make it impure. So, it is better that they to jungle during periods,” Darlami said. “Today people talk a lot about freedom. They do not like to follow their traditions. Our society is getting worse,” he said.

UDAYAPUR, June 20: It has been four years since Udayapur was declared an Open Defecation Free (ODF) Zone but the locals... Read More...