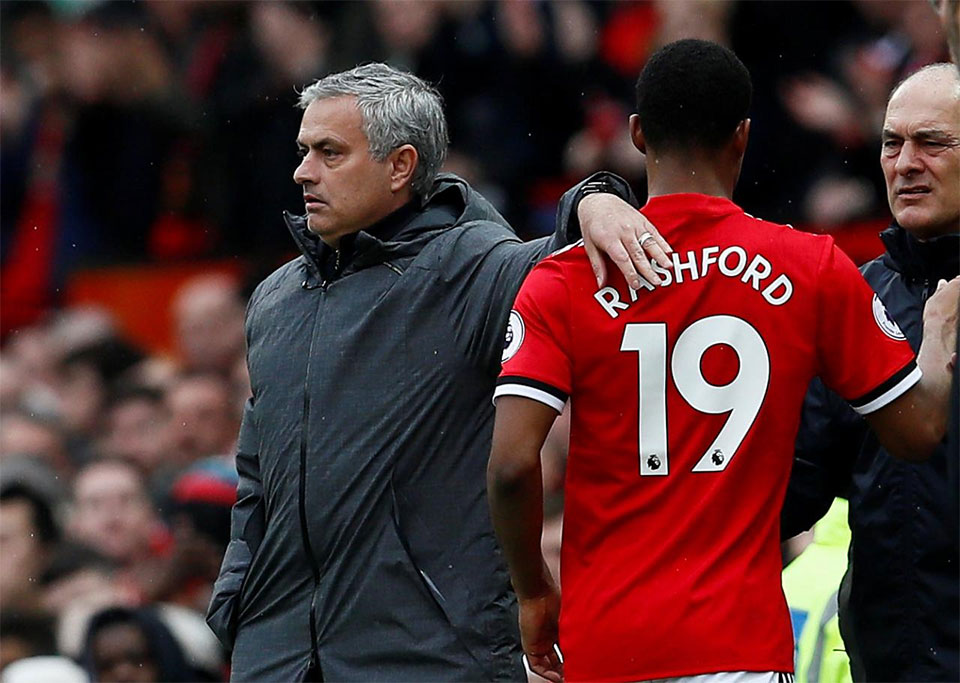 With runaway leaders Manchester City on course for a third Premier League title, second place is the best the chasing pack can hope for and United moved five points ahead of Liverpool.

United stifled Liverpool’s exhilarating attack early on at Old Trafford and raced into a two-goal lead with 24 minutes on the clock after a double from Rashford.

Eric Bailly’s bizarre own goal gave Liverpool hope in the second half, but United held on for a first victory over their North West rivals since January, 2016.

“Perfect result. I wouldn’t go so far as saying it was a perfect performance. In the first half, the game gave us the opportunity to be direct, fast and score goals, more than we did. We were worth the win,” United manager Jose Mourinho said.

Fifth-placed Chelsea moved to within four points of Liverpool, two behind Tottenham Hotspur - who play Bournemouth on Sunday - in fourth, after a nervy 2-1 win over Crystal Palace in the late kickoff.

A deflected strike from Willian and a Martin Kelly own goal put Chelsea in control at the break, but they took their foot off the gas in the second half.

Patrick van Aanholt got his side back in the match in stoppage time, but it was too little too late for Palace as Chelsea held out for a first win in four in all competitions.

It was an important afternoon at the bottom of the table too, with West Ham United slipping to a damaging 3-0 home defeat by Burnley to leave them three points above the relegation zone.

There were unsavoury scenes at London Stadium where pitch invasions and mass protests in the stands forced owners David Sullivan and David Gold to leave the director’s box, with police brought in to restore order.

“We want the supporters behind us, since I’ve been here they’ve been really good. But you can’t cross the line and come on the pitch,” West Ham manager David Moyes said.

Matters on the pitch added to the vitriolic mood, with Ashley Barnes and a Chris Wood double steering Burnley to a second win in a week, closing the gap on sixth-placed Arsenal, who host Watford on Sunday, to two points.

Much of the pre-match talk centred around how United were going to cope with Liverpool’s in-form front three of Sadio Mane, Roberto Firmino and the league’s joint-top scorer Mohamed Salah.

However, even without the injured Paul Pogba, it was United who started on the front foot, adopting a more direct style with Romelu Lukaku the target and the Belgium striker was influential in both Rashford goals.

Rashford’s double - on his first Premier League start since Boxing Day - proved decisive, as Liverpool couldn’t add to the Bailly own goal as they slipped to a first defeat in eight games in all competitions.

“It didn’t go our way because of the two goals we conceded,” Liverpool manager Juergen Klopp said.

“We have to defend these situations better. You can always lose a header or tackle with (Romelu) Lukaku but you need to close the gap in behind.”

In the North East, Newcastle United secured a 3-0 victory over Southampton to move five points clear of the bottom three, piling the pressure on Saints boss Mauricio Pellegrino.

Two goals from Kenedy, on loan from Chelsea, and a Matt Ritchie strike were enough for a second successive Premier League home win for Rafael Benitez’s side.

Swansea City, who had Jordan Ayew sent off in the 11th minute, held Huddersfield Town to a 0-0 draw at the John Smith’s Stadium while Wayne Rooney’s penalty miss mattered little as Everton beat Brighton and Hove Albion 2-0 at Goodison Park.

LONDON, Nov 5: Liverpool cranked up the pressure on West Ham United manager Slaven Bilic with a 4-1 win at... Read More...

Who are PR candidates from nationally recognized seven parties?
17 minutes ago