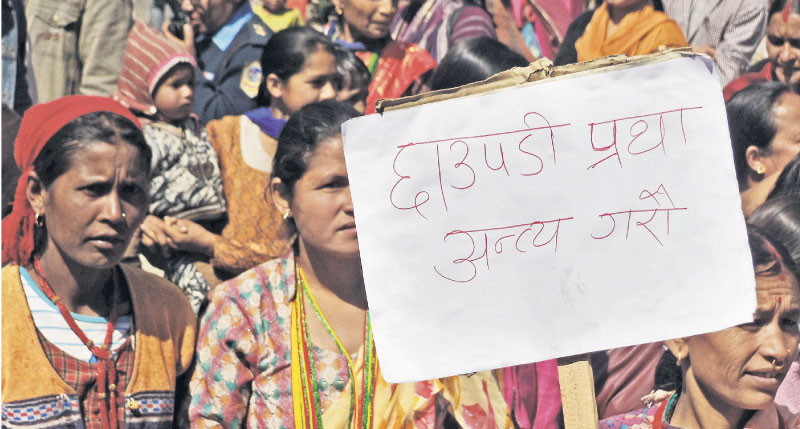 We talk a lot about Chhaupadi practice of western Nepal but have we done enough to change people’s perception on ‘menstrual stigma’?

“I don’t believe in menstrual stigma. Chhaupadi in the mid and far west is not a good practice. It should stop soon,” said Evana Manandhar, Miss Nepal 2015, adding “however, we cannot question our religion. We shouldn’t comment on religion. And, I do not enter Pooja room during my menstrual period. It’s my belief and we have been doing this for a long time.” Ironically, Evana is an ambassador of Water Supply and Sanitation Collaborative Council on menstrual hygiene. She has also been advocating menstrual health and hygiene issues, which includes a campaign to end Chhaupadi.

This is something that I have been hearing for a long time from my educated friends and colleagues in Kathmandu. And, I have always been speaking against the ‘stigma’.

A couple of weeks back, I was participating in the menstrual hygiene management practitioners meeting, where representatives from more than three dozens of INGOs working in Nepal were discussing approaches to implement menstrual hygiene practice. Evana was also on the program. When she was telling this, a group of people both male and female sitting inside the room and listening to her fell silent. Some laughed but no one spoke against her or objected to her statement.

I spent almost a month doing research about witchcraft ‘evil’ in the southern plains. I met several women who were thrashed, having been accused of being ‘witches’. Their stories were horrifying. All of the women belonged to poor families. I met several rights defenders too but surprisingly, many of them were not convinced that ‘witches’ do not exist. They said that they believed in such ‘evil’ practices, even though they are working to protect the survivors.

So is the case with many of the journalists, who are writing and reporting such ‘evil’ practices. They are working just for the sake of work or because it’s their job to report on such issues.

Fatal perception
Let me come back to the menstrual hygiene issue. Evana is just an example. I have met many people, many men and women brought up in Kathmandu, who still believe in the ‘four/five days’ restriction. Some even glorify it by saying that it’s an opportunity for women not to work during that period.

Whenever we talk about menstruation everyone links it with Chhaupadi practice. They say western Nepal is practicing ‘inhumane’ behavior towards its women. It’s of course an inhumane behavior and an ‘evil’ practice. But what are we doing about it?

Living in Kathmandu with exposure to international world, aren’t we supporting Chhaupadi practice, if we believe that women shouldn’t visit temples or enter puja rooms during the period?
If so then what’s the point in speaking against Chhaupadi? How can we expect people living in the far west region or mid west region to come out of Chhau hut and speak against the practice?
If we can’t question our God, then how do we expect them to question their God? When you talk to the people following Chhaupadi practice they say it’s for their God. And their God doesn’t want them to stay at home, or visit the temple.

I traveled with Radha Poudel, a writer and winner of Madan Puruskar, a few years back to Rukum, to discuss social issues after the civil war. She shared some interesting experiences. According to her, forget about Kathmandu, even Nepalis living in the UK or America still follow the ‘tradition’ of being ‘impure’ for four to five days.

The situation is similar everywhere. Recently, Poudel has written and published a small hand book that explores ‘stigma’ related to menstruation. In her book, Paudel has written 69 kinds of myths related to menstrual stigma: Women shouldn’t be given milk and delicious food during menstruation, they cannot touch others, enter in kitchen and even touch cows, priests and enter in temple. If they do so the god will be angry and they will have to go through different problems. Poudel has dismissed these ‘stigmas’ as baseless ‘myths’.

If the people living in Kathmandu or in the cities with good exposure and high educational degrees cannot speak against the practice and follow ‘five’ days restrictions how can we be so sure that training or awareness programs can bring changes in the behavior of people who  follow Chhaupadi practice?

I remember a senior journalist working for a popular show who claimed being ‘untouchable’ for four days is good for women. She said, “Women don’t need to work for four days and they get good rest”. Perhaps it is so for them but for those in the far western and mid western region being banished from home is no fun. For them, seclusion during menstruation is a torture. They die of snakebites in Chhau sheds.

Restricting women to enter the temple or kitchen is equally unjustifiable. If you still enjoy the ‘restriction’ and feel respected, why should you speak against Chhaupadi practice? If you do not practice what you preach, you should not preach others. Until and unless you change yourself you cannot think of changing others.

Media coverage
Menstruation, menstrual hygiene or even hygiene issues are still not in the priorities of the national media. After the release of the Bollywood movie, The Pad Man, it created some kind of discourse in the media but it did not become priority of the national media. I studied editorial coverage of Republica and Kantipur of the past three months. I did not find a single article written on Menstrual Hygiene Health Management or even hygiene in Kantipur daily. A couple of articles were written in Republica but those were mine.

This shows either menstrual hygiene health management practitioners are not writing about the issue or newspapers are not giving space to such articles. Not just in editorial pages, there were hardly any news items regarding menstrual hygiene in other pages. Whenever there’s a death because of Chhaupadi, it makes headlines in newspapers, TV and Radio. The issue is forgotten after a few days. There is a perception that hygiene issue is NGOs’ jobs.

Talk about it
All these ‘stigmas’ are somehow linked with ‘God’, the God that people believe in. What if we convinced priests of temples to come forward and talk about menstrual hygiene against the menstrual stigma? This might bring a huge change. I am sure if the priests started saying, the women can enter the temple during menstrual period and that it’s not a sin and that it’s a natural biological process, we will see the changes. Humanity has existed because women bleed.
Every year, many women fast in Rishi Panchami for purity. On the occasion, women take a bath and carry out rituals for forgiveness for the offences they knowingly or unknowingly made during menstruation for the past one year. Our religious leaders have the responsibility to clear such misperceptions among women. It demands active involvement of priests and religious people in menstrual health and hygiene promotion.

Most of all, we need commitment from ourselves. We should be convinced that menstruation is no sin.

How to have a quality conversation on Tinder!

With tinder gaining its popularity in India, here are a few tips to keep in mind while having a conversation... Read More...