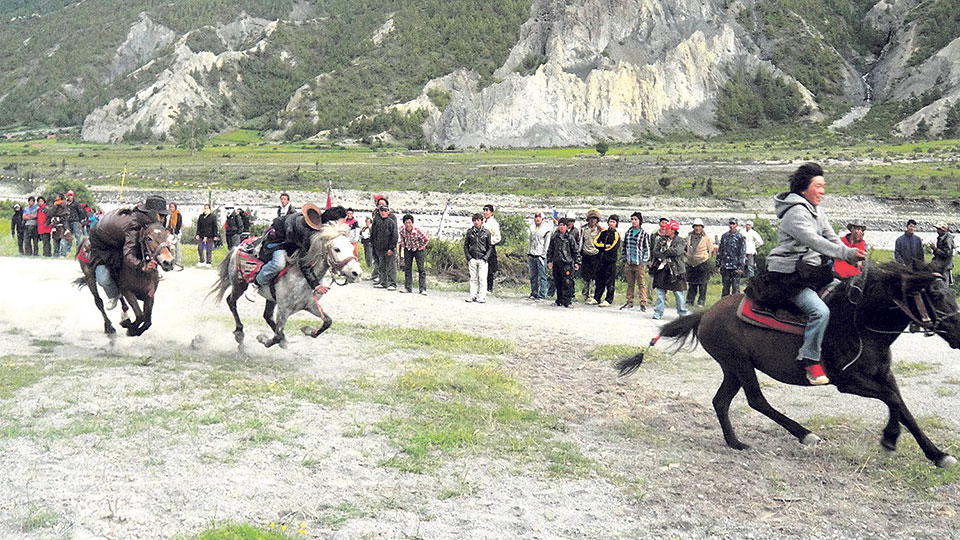 Though different types of adventure activities are organized in the area or a regular basis, they are yet to be established as tourism products.

The area welcomed 158,589 foreign tourists in 2017, according to the Annapurna Conservation Area Project (ACAP).  Most of them visited the area for trekking.

Local tourism stakeholders say that the area is not getting desired benefits from tourism because of the inability to integrate different adventure tourism activities into a single package.

“A large number of adventure tourists can be attracted to the Annapurna Area by organizing different varieties of adventure activities,” Surya Thapaliya, chief of Nepal Tourism Board (NTB) Pokhara Office.

“Skiing is possible in Dhaulagairi and Manaslu, which lie within the Annapurna Conservation Area. Similarly, horse riding is feasible in the Himalayan region above 4,000 meters. Archery can be promoted as an adventure sports. Other activities like rock climbing, high altitude race, and mountain biking, among others, hold immense prospects in the Annapurna Conservation Area.”
Thapaliya pointed out that locals as well as tourism stakeholders have not felt the necessity of promoting other adventure activities so far.

However, Santosh Sherchan, a conservation officer with the National Trust for Nature Conservation (NTNC), puts forward a different view regarding adventure tourism in Annapurna region. Sherchan said that different adventure sports are possible in the Annapurna region except skiing. “Snow does not remain for a long time in Nepal like in Europe. This leaves minimum possibility for skiing to be successful in the Annapurna region,” said Sherchan. “But, other various adventure sports can attract tourists in this area. For instance, Manang, Mustang, and upper region of Gorkha have possibility for mountain biking, high altitude race and horse riding, among others.”

Sherchan further said that such activities, however, have not been incorporated into tour packages.
Some adventure sports are celebrated as festivals by locals of the area. Yartung, a traditional horse riding sport in Manang and Mustang, has been limited to the locals so far. Some experts say that a golf course can be built in Manang valley and boat race can be organized in Tilicho Lake.
However, some say that focus should be on core activity rather than diverting to others. “It is not easy to firmly establish other adventure sports at a time when we have been failing to promote the main activity to the desired level,” Dipak Raj Adhikari, president of Trekking Agencies Association of Nepal (TAAN) Western Region Association. “Himalayan region holds immense tourism potential. But we alone can do nothing to exploit the potential,” he added.

KATHMANDU, April 21: The third edition of Himalayan Travel Mart is to be held at Soaltee Crowne Plaza in Kathmandu... Read More...

Federal Democratic Republic came through the sacrifices of martyrs: PM Dahal
6 minutes ago