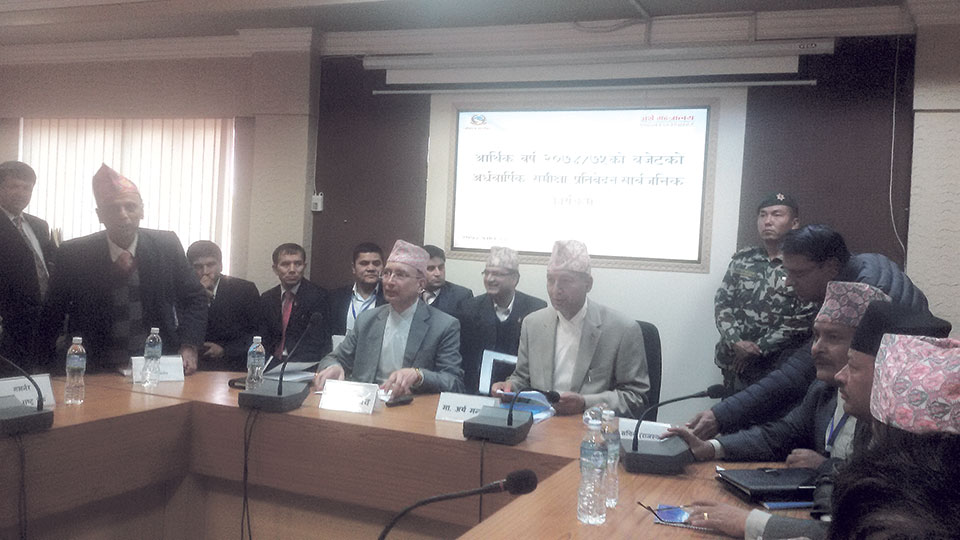 KATHMANDU, March 8: Facing a huge mismatch of financial resources in the implementation of budget for the current fiscal year, the government has announced a raft of belt-tightening measures.

Releasing the mid-term review report of the budget for the current fiscal year in Kathmandu on Wednesday, the Ministry of Finance announced such measures to address the budget shortfall of Rs 92.8 billion.

The measures announced by the newly appointed Finance Minister, Yubaraj Khatiwada, include cutting of budget for purchase of furniture and fixtures, new computers, laptops, printers, procurement of software, tightening foreign junkets from the government budget, restriction on transfer of funds and reform in revenue mobilization.

As the government estimates to make expenditure of Rs 982.86 billion with an estimated resource of Rs 890.5 billion, the government is facing shortfall of Rs 92.8 billion, according to the finance ministry officials.

The government faced budget deficit of Rs 35.47 billion at the end of first half of FY2017/18, compared to a surplus of Rs 40.22 billion in the corresponding period of FY2016/17, according to the ministry's data.

The government's measures aim at arrange resources to bridge shortfall of funds.

The shortage of fund is mainly the result of the surge in recurrent expenditures, fiscal transfers to sub-national governments and faulty accounting of carried over surplus fund of nearly Rs 102 billion from FY2016/17 during the budget speech.

The finance ministry later found that the treasury was facing deficit by Rs 48 billion.

The slowdown in revenue growth rate has also made it difficult for the government to bridge the gap of expenditure and expenses. “The budget allocation was made by considering an estimated treasury surplus of Rs 102 billion from the previous fiscal year while it remained in deficit of Rs 48 billion leading to a shortfall of Rs 150 billion,” read the mid-term review report.

Finance Secretary Shankar Prasad Adhikari said that the projects failing to spend will be asked to surrender the allocated budget.

“Since there is shortfall of resources, we are going to intensify efforts to plug revenue leakage, implement austerity programs and make projects surrender unspent budget,” Adhikari said in the press meet organized to unveil the mid-term review report.

The finance ministry has also said that it would raise the full amount of domestic debt, departing from the trend of previous years when the internal borrowing remained below the target set in the budget speech. The government can now make internal borrowing of Rs 30.21 billion only.

Also, the finance ministry officials say that they will request the local units to return the conditional grants if they fail to spend it by mid-July. Another measure announced in the mid-term review as part of plugging the revenue gap is filing of various unutilized funds in the revenue account.

Adhikari said that duplications on the social security programs will be removed and consolidated.
Finance Minister Khatiwada, however, was quick to caution that the belt-tightening measures will not impact general public. “We are cautious that such cost-cutting measures do not affect our basic service deliveries,” he added.

KATHMANDU, May 30: The government has accorded top priority to transportation sector, setting aside Rs 163 billion to build transport... Read More...

KATHMANDU, May 25: Like his predecessors, Minister for Finance Yuba Raj Khatiwada said he had focused on ‘growth of real... Read More...