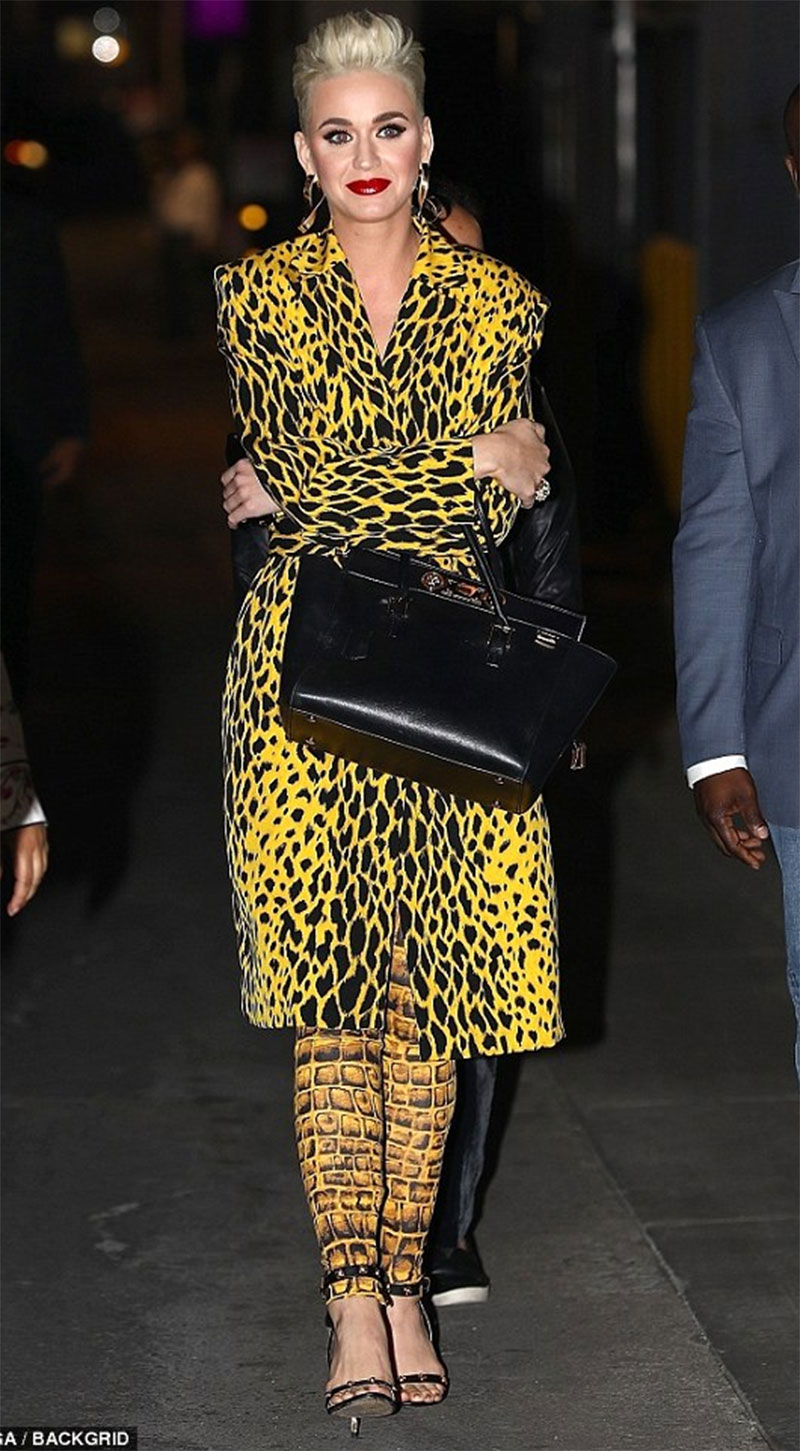 March 6: Katy Perry is days away from the premiere of ABC's American Idol reboot. So the Swish Swish songstress was thrilled to plug the singing series Monday as she made her way to Jimmy Kimmel Live! in Hollywood.

There, the Roar hitmaker, 33, embraced her animal instincts in a yellow cheetah print coat and matching crocodile skin patterned leggings.

Though her outfit was ultra-glam, the California Gurl kept thing mellow on bottom and covered her feet in fuzzy lambskin slippers before having to put on heels for the camera.

The starlet carried a sparkling Perrier drink in one hand while she toted along a black bag with gold hardware with the other.

Her platinum cropped was backcombed into a striking style while the Part Of Me singer masked the rest of her face with cat-eyed glasses.

She made time to sign a few autographs and chop it up with fans before disappearing inside Jimmy's studio at the El Capitan Theater on Hollywood Boulevard.

Katy glammed up her look with studded stilettos and scarlet lips.

The night earlier the songstress posed up a storm at Byron Allen's Oscar Gala Performance Party in Los Angeles on Sunday.

There, she dazzled the red carpet in a beige beaded see-through gown before taking to the stage in a pink sequin jumpsuit.

Her appearance at the star-studded bash comes after she was spotted on a romantic trip with her former flame Orlando Bloom earlier this month.

The singer enjoyed a casual stroll around Prague with the 41-year-old actor and his pet pooch Mighty, amid rumours they have rekindled their relationship.

The good-looking duo split after a year of romance last March, but reportedly rediscovered their 'close connection' during a trip to the Maldives last month.

Her relationship with Bloom isn't the only revival in Perry's life, as the superstar will be front and center during ABC's reboot of American Idol.

The singing show debuts this Sunday at 8pm on ABC.