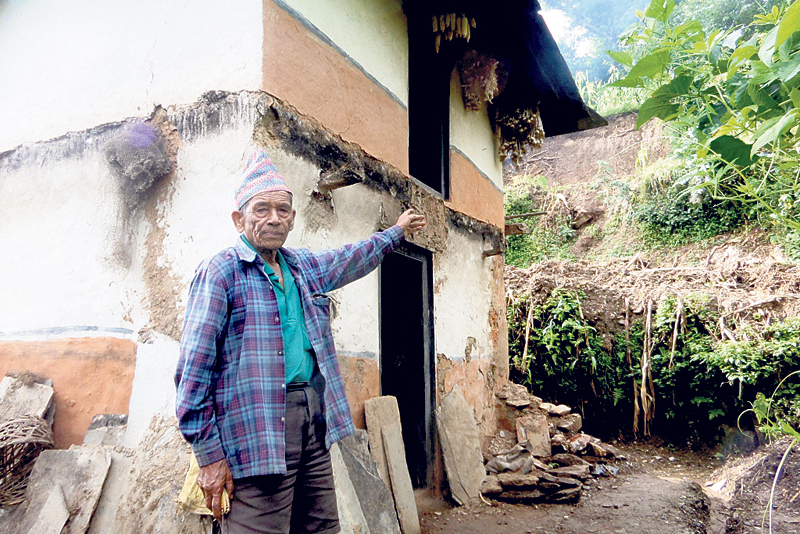 KHABANG,Aug 13: Piles of mud have surrounded their houses. Landslides are regular occurrences every monsoon here. Khabang residents do not dare to live in their houses when the rain and landslides are more intense. They head for safer locations. They cannot abandon their houses permanently. As soon as weather gets better and risk of landslides seems to fade off, they get back to their houses.

Though the issue of rain and landslides and the forceful temporary displacement is not new for them, most of them now feel too tired to continue it. Losing human lives, cattle, houses and plot of lands to the landslides have left them with heavy heart and hopeless mind. The recent landslides on July 25 and 26 though did not incur any human casualties has nonetheless displaced them and forced to live a miserable life that is devoid of even basic needs.

“We are living a life where we are alive but dead. There is no way to live the present and there is no hope of a better tomorrow,” said Bhim Bahadur Buda, 67, of Khawang - 3. True to his saying, there are hardly any traces of happiness on his face. His house is empty though it is high time for corn harvest. The back side of his house has been badly damaged by landslides. “The pain is inexpressible. We have been homeless,” he lamented.

His seven-member family is living in a rented room of his neighbor's house.  They keep constant watch over their abandoned house. “Corn is ripe in field and it's time to pick them. But we are living in rented room and we don't know how bring life to normalcy. We have no means to harvest the corn,” he said adding that being homeless ahead of a major festival like Teej has made them feel very bad.

Family of Devi Pun of the same village has no different story. After the landslides on 25 July hit her house, her seven member family has been taking shelter in a cow shed of her neighbor. All the belongings of her house have also been shifted to the cow shed. Some of the stuffs that could not be squeezed in could be seen spread out in open. “I had never thought even in my nightmare that I would have to go through this. Though we faced harsh winters, summer, and monsoon earlier, this is the first time we became truly homeless,” she lamented. “We have been living like this since around two weeks. There is no peace in mind, no comfort in heart,” she added.

Pun and her husband Nar Bahadur had worked hard for the last several months in manage food and other necessities for the year. However, while being forced out by the landslides, they could not get all those things out of the house. “We had worked through out the year and brought essential amenities together for the year ahead. But when the landslide forced us out of our house, we had to leave all that behind,” Nar Bahadur said adding that they are not sure if that will survive.

The Pun family is waiting to get back to home. However, it is possible only if the rain stops and the chances of further landslides go down. “We feel little bit hopeful when there' no rain for few days. But, then, heart goes cold as soon as we see clouds hovering over the sky,” Pun stated.

Entire ward of Chormol in Khawang - 4 looks deserted and the story of Pun and Buda is in fact the reality of every household here. Around 44 families have left their house for safer areas due to landslides. However even their temporary shelters do not give the confidence of being secure. According to the victims, there's hardly any plain land available around. And sloppy lands are always prone to landslides.

“Our entire settlement has slightly shifted away due to the landslides. We were under risk, even now we are living under risk. Such incessant rain is always a huge risk in our areas. Cracks are visible all around the earth surface,” said Pahal Singh Gharti, secretary of Chormol VDC. He added that the VDC has reported the same to the District Natural Disaster Relief Committee and requested aid.

RASUWA, July 27: Before they could fully recover from the devastation caused by the 2015 earthquakes, yet another disaster has befallen... Read More...

KHOTANG, June 20: A massive landslide in Patheka of Khotang district has destroyed a canal of a local mini hydropower project,... Read More...

Madrasa education to be included in government curriculum
20 hours ago

The trials of Aung San Suu Kyi, from heroine to villain to convict
22 hours ago