Need to pay for free drugs for 90 more days 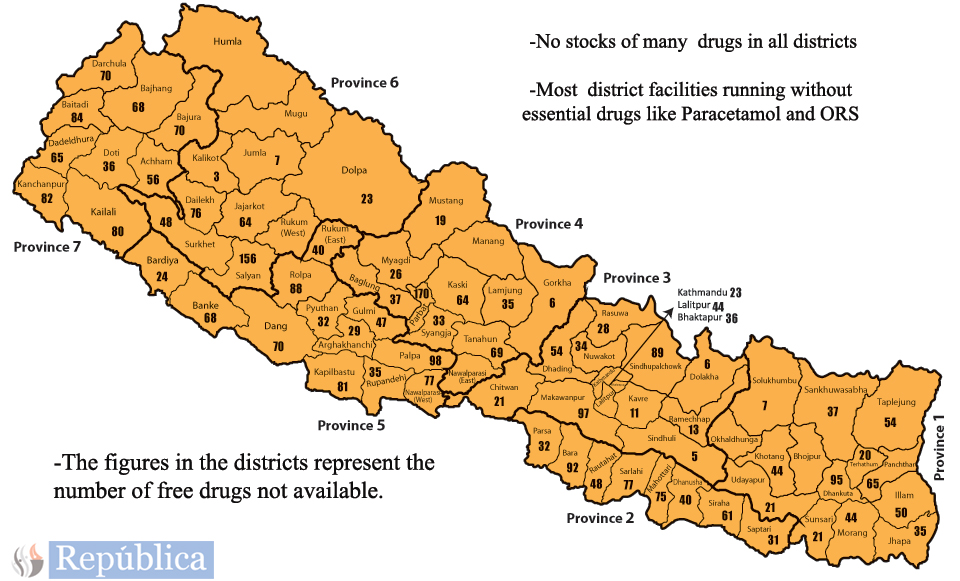 KATHMANDU, Feb 27: Patients visiting government health facilities in all 77 districts are going to be deprived of essential medicines for at least the next three months as the government has failed to purchase and supply the drugs meant to be distributed free of cost. The medicines have been in short supply since last November because of red tape.

As the authorities have failed to provide the drugs to patients, the needy among them have been buying these essentials from private medical stores. The situation will remain unchanged until the supplies reach the health facilities.

The government has announced to provide more than 200 items under 72 kinds of essential drugs free of cost to patients visiting government health facilities. But the general public has not been able to benefit from the government policy as the stocks of such medicines including Paracetamol and ORS (Oral Rehydration Solution)  started emptying from September in all the districts, according to the Department of Public Health Services (DoPHS).

Almost all stores in the 77 districts have run out of most of the essential medicines that are meant to be distributed free of cost, said officials at the Logistics Management Division (LMD) under  DoPHS. The stores had started to run out since September and some of them were completely out by November. "We have already started the procurement process for 32 items but these are likely to be supplied only after 90 days," said Babu Ram Lamichhane, undersecretary at  LMD. "Patients visiting government facilities will have to buy those medicines from private shops until the government health facilities stock up again," he added.

According to the Primary Health Care Revitalization Division (PHCRD) under  DoPHS, the government has allocated a total of Rs 1.5 billion in the current fiscal year to purchase essential medicines for distribution free of cost.

Out of the annual budget allocations for drugs,  70 percent is allocated for the center and 30 percent for local levels. The government allocated Rs 1.49 billion for essential medicines last fiscal year while Rs 1.5 billion was allocated the previous fiscal year.
Stocks of over 60 drug varieties in the five regional government drug stores have been down to nil for months. However, the government is yet to make any drug purchases this year. It bought drugs worth only Rs 490 million out of Rs 1.10 billion allocated for the department last fiscal year.

Officials blame frequent changes in government and national and local level elections for the delay in procurement of essential medicines in the current fiscal year.
"The drugs purchased through LMD last from May to September. Public health offices under the local bodies, regions or districts then have to manage with the budgets allocated for them. But many local authorities are not found serious about purchasing the medicines. If they don't have the budget they can ask the central level authorities," said Lamichhane.

KATHMANDU, June 12: Monson that had entered the country four days ago is yet to become fully active nationwide. ... Read More...

KATMANDU, Feb 13: The Election Commission (EC) has given two more days to three political parties to revise their lists of... Read More...

Rainfall likely to continue for three more days
16 hours ago