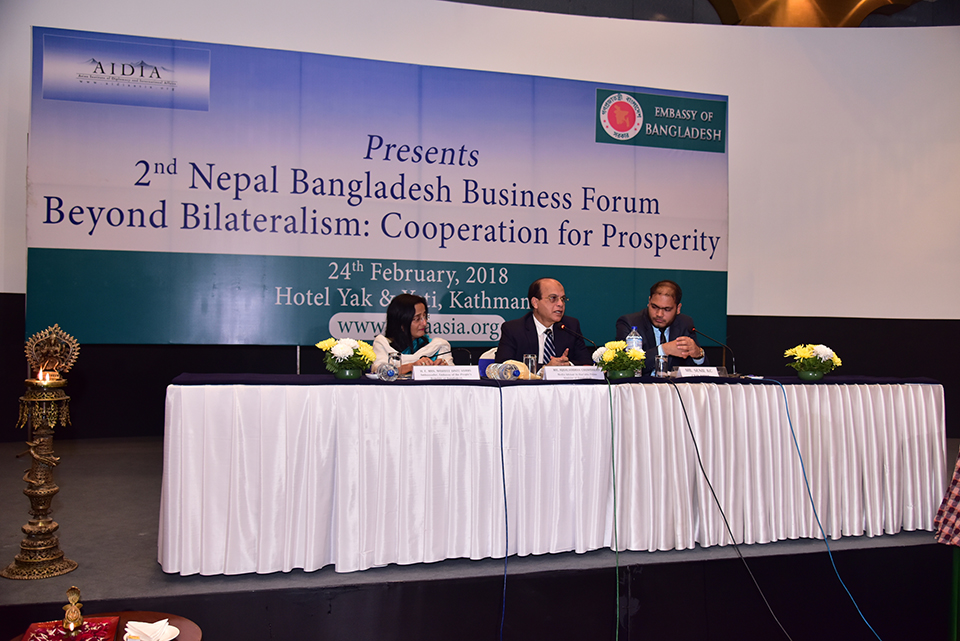 KATHMANDU, Feb 25: A senior aide of Bangladeshi Prime Minister Sheikh Hasina has said that both Nepal and Bangladesh need to work further to exploit the full potential of trade and investment between the two countries.

Addressing second edition of “Nepal-Bangladesh Business Forum (NBBF)” jointly organized by the Asian Institute of Diplomacy and International Affairs (AIDIA) and the Embassy of Bangladesh in Kathmandu on Sunday, Prime Minister Hasina's media advisor Iqbal Sobhan Chowdhury said although commerce between Nepal and Bangladesh have steadily increased in the recent past the potential of trade and investment opportunities between the two countries have not been exploited to their full.
In the event organized with a theme "Beyond Bilateralism: Cooperation for Prosperity", Chowdhury also pointed out the need to have increased interaction between the businesspersons of the two countries to promote bilateral trade and investment between the two countries. He maintained that various discussions forums could also contribute towards this end.

Bangladeshi envoy to Nepal Mashfee Binte Shams said they have been trying to address the complaints of business community and entrepreneurs that have impeded trade and investment between the two countries. She said that the second edition of NBBF was focused on banking and connectivity, keeping in view of the complaints of business community and entrepreneurs in Nepal.  “If these sectors represent the main improvement priorities, they also demonstrate the growing trades and businesses interests between Nepal and Bangladesh,” she said.

The first session of the event dwelled on the role of banks in facilitating bilateral trade, investment and economic growth. Additional Secretary of Government of Bangladesh and Chairperson Nepal-Bangladesh Bank Limited Jalal Ahmed, Former Vice-President of the Asian Development Bank Dr. Bindu N. Lohani, Former Governor-Nepal Rastra Bank Deependra Bahadur Kshetry and former Secretary of Ministry of Commerce and Supplies Purushottam Ojha were among the panelist in the session, according to a press statement issued by the AIDIA.

The second session focused on the expansion of Bangladesh-Nepal connectivity with the participation of various senior government officials including Director General of Department of Railways Ananta Acharya, CEO of Bangladesh Foreign Trade Institute Ali Ahmed.