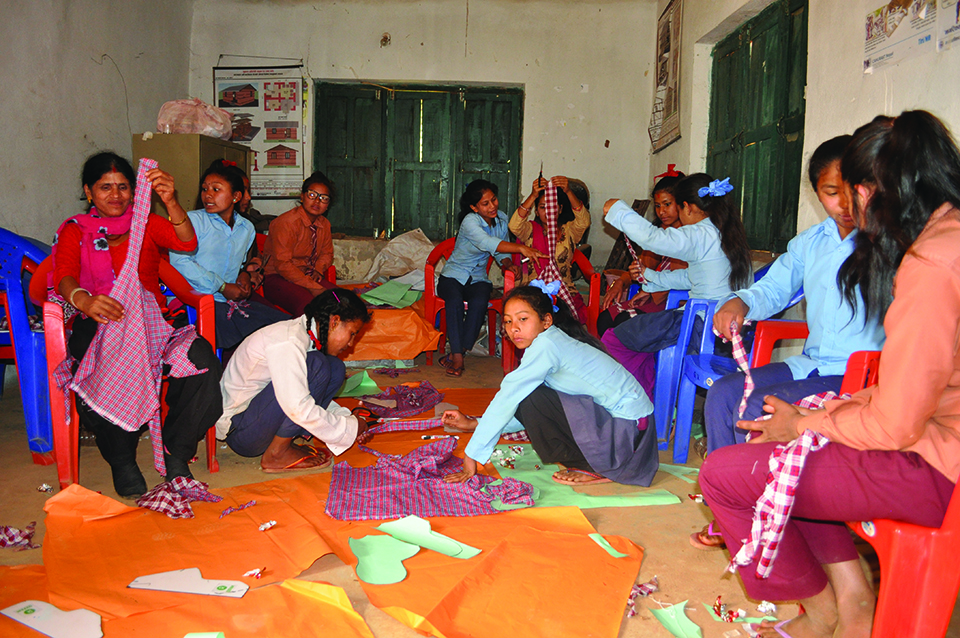 For many girls, periods mean missing school days. One of the reasons is lack of access to better and cheaper sanitary pads.

A man lives 12 months a year but a woman only 10 months. This dialogue from the movie Pad Man will make you think twice, thrice and even more of its actual meaning. Pad Man, is not just the story about ‘Sanitary Pad’ or ‘Menstrual Hygiene, it is as much about women’s fight for ‘dignity’ and against ‘social stigma’.

As we were watching the movie, my wife sitting next to me began to relate it with her own experience. I could see tears rolling down her cheeks. If someone born and brought up in Kathmandu had to face such experiences, I can imagine what women in remote areas are going through.

I came to learn about ‘Chhaupadi’ up close only in 2007. Travelling through Dadeldhura and Achham, to produce the story, I witnessed the brutal reality of discrimination. I had seen discriminations that declared women ‘impure’ for four to five days a month in eastern Nepal, where I was born and grew up, too.

I still remember the story of one of the media practitioners who was sent on a forced leave in Bajhang district during menstruation period. “Once I went out of FM station, they spread water in the station, for what they call to make it pure,” she said. “I felt so embarrassed and began questioning if it was a sin to be born as a woman.”

The situation hasn’t changed in the last 11 years. In the past couple of months, three girls died during ‘banishment’ for having periods. This is the situation across the country. At a time when we are talking about ‘digital revolution’ in the age of technology, women in Nepal are still struggling to live a dignified life.

While watching Pad Man different thoughts flooded my mind. I remembered several women I had met in personal and professional life, and their plight of having to use ‘dirty clothes’ to protect themselves—as they had no access to pads—during menstruation.

But not all is doom and gloom.

In the recent edition of Nepali Times, I read about how a Taiwanese lady Lin Nien-Tzu (Claire) set up Dharti Mata (Mother of the Earth) Sustainable Workshop in Patlekhet, near Dhulikhel, to provide local women with jobs producing eco-friendly, cotton menstrual pads. This is what exactly, the pad man does going from village to village. Rather than earning millions by selling the patent right of the machine, he travels from village to village to spread the knowledge of making sanitary pads.

Everyone watching the movie takes a long breath and becomes happy when Akshay Kumar, the protagonist, smiles after receiving a ‘satisfactory feedback’ from his first client who uses pads, Sonam Kapoor. The happiness actually doubles when women start using it. Imagine the joy if this happiness comes to all Nepali women.

Few days back, we were celebrating the successful completion of first phase of DFID funded Rapid WASH project implemented by DCA, a Danish NGO. Bibek Balla, Hygiene Promotion Officer of the project recalled how he was called ‘the pad man’ when he was telling stories of ‘sanitary pad’ in Dhading and Gorkha districts.

The project promoted making of sanitary pads using locally available materials. Not just the women, even boys in the community came together for this cause. It was part of the hygiene promotion activity in Dhading and Gorkha district. Last year, DCA organized a photo competition to commemorate International Women’s Day.

The first prize was won by a picture which had two young men sewing reusable sanitary napkins together with women. The photo received good number of likes and comments in social media.

It is very inspiring to see men coming to the forefront breaking away from taboos and discussing openly about menstrual hygiene management. We have been focusing on menstrual hygiene management in the communities and the schools. But this has not yet addressed all issues. For many girls, periods mean missing school days. One of the reasons is lack of access to better and cheaper sanitary pads.  Teachers say the girl simply runs away if she ‘bleeds’ when in school.

Menstrual Hygiene Management plays a fundamental role in enabling young women and girls to reach their full potential in education.

Although many initiatives have been taken to bring change, there is little to show for success due to lack of proper institutional mechanisms in place. Behavior change interventions (along with access to basic services) could be the most important factor in achieving social transformation.

NGOs working in the far western region launched a plan to demolish ‘Chhau huts’ but it did not go as expected. The girls were forced to spend their nights in the open field. Clearly behavioral changes cannot be imposed rather it needs to inspire people to go against deep-rooted evils.

Nepal’s Parliament passed a bill criminalizing banishment of women during menstruation last August. Anyone who violates the law—including those girls and women who isolate themselves—can be sentenced to three months in jail, fined Rs3,000, or both. The actual implementation will come into effect from August 2018. We don’t know whether it will make any difference.

World is discussing making sanitary pad tax free. Sanitary pads should be readily available at a reasonable price, if not free. Nepal could be the ice-breaker in South Asia. If sanitary pads are easily available everywhere in the rates that people can afford, it will definitely find more women using it.

After all, it’s the issue of the health. Rather than spending money in the hospital, one can be convinced of using sanitary pad. Health practitioners say poor menstrual hygiene can cause fungal infections, Reproductive Tract Infection (RTI) and Urinary Tract Infection (UTI). Unhygienic practices also leave women vulnerable to infertility.

The 2017 Scoping Review and Preliminary Mapping on Menstrual Health and Hygiene Management conducted by Nepal Population Services International show that a majority of adolescent girls and women face difficulty in accessing appropriate sanitary pads either due to unavailability or unaffordability. Thus we need to bring feasible plan to regularly provide affordable pads or cloths to adolescent girls and women.

NGOs which distribute sanitary pads to women while providing relief materials in the wake of disasters and floods are actually contributing for women’s dignity and privacy. I have spoken to many women about the ‘dignity kit’ as I got the opportunity to cover 2015 earthquake response and flood response in Nepal and Rohingyas response in Bangladesh. They said sanitary pad was very useful for them.

Thus the government should make sanitary pad tax free and easily available. NGOs should spread message to encourage women to use sanitary pads. Availability of sanitary pads in cheap rate and development of proper waste management will also somehow change the perception of ‘Chhaupadi’ and ‘social stigma’ that comes along with menstruation. Family members should be as much committed to this cause.  For this new generation should vocally speak against such ‘evil practices’.

Saving the dignity of medical sector amidst a mountain of anomalies

KATHMANDU, July 15:  A few incidents that happened in the medical sector in the last few months speak volumes about the... Read More...

KATHMANDU, May 1: The Nepali Congress has said that the impeachment motion was brought against Chief Justice (presently suspended) Sushila... Read More...

Minister Jhakri to resign from her post
21 hours ago

I do not have desire to cling onto power: Outgoing Minister Shrestha
25 minutes ago

Govt has not barred BFIs from accepting land as collateral: Minister Shrestha
32 minutes ago

NAC to revise its 10-year business plan
1 hour ago