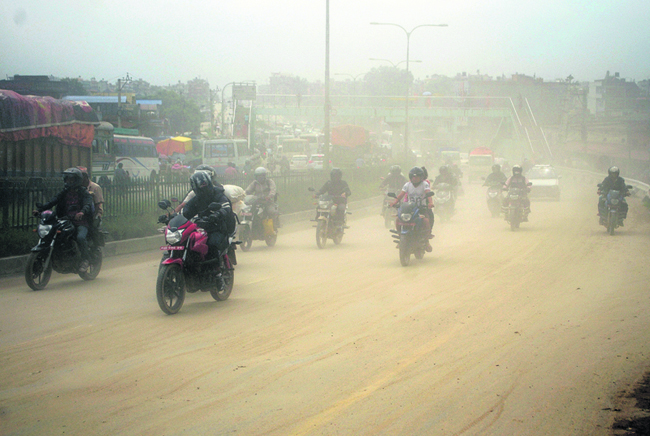 KATHMANDU, Feb 22: The Suryabinayak-Dhulikhel road will be upgraded to eight lanes. Concerned authorities have stressed the need for starting the construction work at the earliest.

They delivered their views at a suggestion collection campaign organised today at Jagati, Bhaktapur by the Department of Roads in this regard.

On the occasion, former Minister and Parliamentary Member Mahesh Basnet underscored the need for starting the project soon. "The road expansion will alleviate traffic jam," he said.

He also called for the need to install traffic lights, construct overhead bridges and manage footpath.

Informing about the road expansion, Sanjaya Kumar Shrestha, chief of the Foreign Aid Division of the Department of Roads (DoR), said Japanese government, which will provide financial support to the project, was carrying out a preliminary study of the project.

It had pledged to sign a loan agreement after conducting a preliminary study during the visit of representatives from the DoR to Japan recently.

The Japanese government will provide loan for the project at 0.2 percent interest, he said.

"Under the project, there is a plan to construct a four-lane tunnel road at Palanse to ease the difficulties to upgrade the road to eight lanes from Palanse to Sanga Bhangjyan," he said.

"Fuel tankers will not be allowed on the tunnel road. A study is also being conducted to build a tunnel road along the Suryabinayak-Koteshwar road," he added.

Other participants like Mayor of Suryabinayak Municipality Basu Dev Thapa and local representative from the municipality Ukesh Kawa and district president of the Federation of Nepali Journalists Pushkar Raj Budhathoki also pitched for starting the project soon. RSS