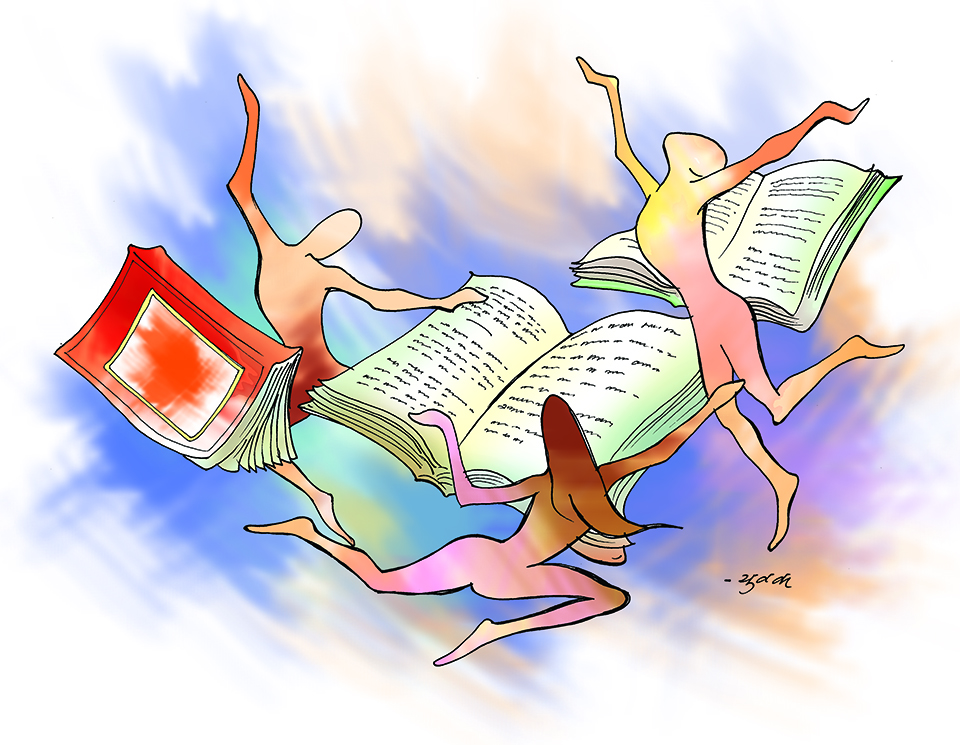 This generation needs a different education with different sets of books and an
environment to dream crazy. Are we ready to invest in the generation of spacewalkers?

It was a weekly journal that parents are expected to write to their kids. The topic was “seasons.” But, it was hanging over my head like a sword. I spent most of my morning grumbling about lack of good children’s books while chatting to one of the children books writers. I was shocked to hear that publishers are less generous to spend money on illustrations

At the age when Elon Musk, the founder of Space X, is laying the real roadmap to Mars, I am finding difficulty in explaining four seasons to my daughter. The irony can’t be emphasized better. Just a week back, when my mouth was ajar with awe and admiration on what I was seeing—launched rockets returning to the earth without disintegrating, and successfully landing on the drone ships— my six-year-old girl watched it without much reaction. “ I had not seen a rocket landing back, that’s pretty cool!” she just acknowledged it and continued doing what she was doing. “Pretty cool” is what she would describe a new dance move if she stumbled into a new one.

I tried to put the missing context for her. “You see chori, this guy, Elon Musk, did something that was unimaginable when Papa was a kid. He launched the biggest and the heaviest rocket, Falcon heavy, to space. And you know what else he did? Packed his electric sports car, as if it was a gift to Mars, and released it into space. But, the fascinating part of all is what you just saw—the successful landing of the two booster rockets back on the earth. These smooth landings validate that we can not only reach Mars but probably return to the earth safely. Is not that cool?” I concluded my lengthy and complicated monologue.

She had no reaction. She just looked at me as if I was going crazy about two silly rockets landing back on earth. It was me who needed to adjust my emotions. For me, with my baggage of past, especially considering where I was born and where I grew up, it was becoming perplexing to see what science had achieved within my lifetime. For her, the world is not much different than the world she came into. So my attempt to provide a context on astronomy measurably failed.

In the evening, I started working on the journal. Keeping in mind the classical failure on astronomy, I was attempting to explain seasons. The goal was to appeal her enough on the topic. As I was writing, a picture of a planet earth going around a picture of the sun, on a third-grade science book, danced in front of my eyes. I recalled nothing but that picture. Books for little kids without illustrations are missed opportunities. In order to engage kids in real learning environment, we need to invest on them. Otherwise, it’s like filling their curiosity buckets with spoons. We need to create an opportunity to let them dip their buckets or let them dive right into the pond of knowledge with their buckets.

I recollected how curious we, in general, were and how disconnected our classrooms were. I recalled copying answers from the blackboard, dictated by our teachers. There was not much room for imagination or curiosity. Whatever curiosity we had collided with the chicken poses—the punishment for posing too many questions and disturbing the class—and almost certainly got shattered. By the time, we were in high school, we had learnt our lessons: curiosity and questions are not good for health. During high school years, British Council, not the classrooms, had the answers to most of our curiosity. And boy, we were lucky to be residing in Kathmandu.

I want justice for my daughter—and support to keep her curiosity intact. So, I started unraveling my own baggage of seasons trying to stitch a small pouch for her, without illustrations.

If you want to choose your favorite season based on your birthday, you probably need to choose spring, rather than summer. You were born at the very end of spring—based on astronomical calculations, which break seasons by exact days relying on equinoxes (literally means equal days and nights, in Latin, when the earth gets equal light from the sun) and solstices (when the distance of the earth is the farthest from the sun on its elliptical space, and the earth gets the most uneven distribution of sunlight).

June first is the beginning day of summer in America, thus your birthday falls in summer.
But wait, your summer can totally change depending upon where you are on earth. Your birth month, June, is summer in America, but winter in Australia—the kangaroo country. You see, when America gets the most sunlight, and enters into warm summer season, Australia gets the least sunlight, and enters into chilly winter. So, if you were born in Australia, you probably would have loved winter the most, based on your choice of adoring a season of your birth. June is the month when winter hits Australia hard.

Yes, spring, summer, fall, and winter can be drastically different in different places of the earth. The farther away you are from the equator—the imaginary line that divides the earth into two equal halves—the bigger the changes in seasons you would experience. For example, in Nepal, where your Papa and Mama were born, we could not experience the amazing fall that you have always enjoyed in America. But, we had our fair share of long scorching summer that starts just around your birthday. You have no idea what summer actually means in some parts of Nepal. Some day you will experience that. But, for now, continue enjoying the last few days of snowy and chilly Boston!

It was important for me to set this right—answering enough to keep her curiosity curve climbing up. It was important to explain things with a human touch. Weaving personal experience for that matter was important. Parents and educators often forget that providing the environment for cognitive growth means keeping the curiosity of our kids alive—the only trajectory that is going to separate our kids from the living machines programmed for certain tasks. Everywhere you go, you hear machines, inhuman voices, throwing canned information at you. Those very few who deny being programmed definitely would define the world.

Musk, for example, would not have been the founder of Space X, had he been born in a country where curiosity was considered a nuisance rather than strength. Musk did not dream of landing on Mars yesterday. His fascination to Space started very young. He was just 12 when he built his first computer game that was of course about rockets on space. He validated his dream at the age of 12 by selling his first computer program and continued building on it. He immigrated to the US and built something that has the real potential of taking mankind to Mars.

Have you ever wondered what environment Musk may have received to become a crazy dreamer? I wonder what books he read to believe in his dreams. That’s the kind of books we need our kids to read. Books that encourage them to dream, books that guide them to understand science and technology, books that generate more questions, books that do not pluck off their delicate curiosity wings but strengthen them, and most importantly, prepare them to fly by boosting their self-confidence. Those are the types of books that parents, like me, are looking for.

The author is Cofounder at Advocacy for Refugee and Immigrant Services for Empowerment (ARISE), a nonprofit organization
based in Massachusetts

A teacher’s importance is very well represented by the above doha.  If both God and teacher were standing together, who... Read More...

Being a good teacher is becoming increasingly tough. It’s even tougher when it comes to teaching modern day teenagers ... Read More...