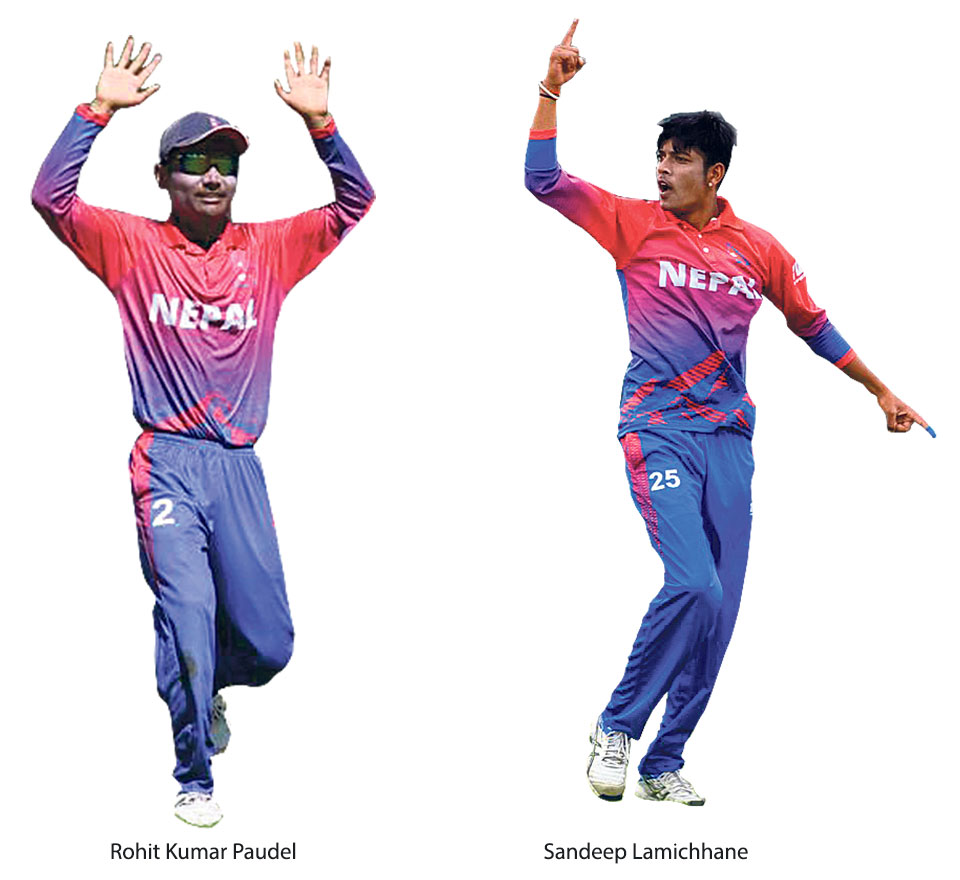 KATHMANDU, Feb 17: Eyebrows were raised when young cricketers were included for the crucial ICC World Cricket League Division Two in Namibia. The national U-19 players Rohit Kumar Paudel and Anil Kumar Sah were promoted to the national team for the first time, whereas Dilip Nath and Lalit Bhandari started their career in national colors only a few months ago.

The crop of young players is led by 17-year-old Sandeep Lamichhane, who has become a new household name. Twenty-year old Aarif Sheikh, despite making his debut as early as 2014, had not been able to secure his place in the national side. This was Nepal’s first team travelling abroad with number of inexperienced players in the squad in the recent times. However, the performance by the young players proved that they were rightly selected for this level.

The historic comeback of the Nepali team against Canada was a pinnacle of confidence and bravery these young guns possessed in the new era of ruthlessness in cricket. The four young heroes who laid a strong ground for Karan KC to take Nepal home when the senior batsmen failed miserably deserve accolade and further opportunity to grow into long serving players for Nepal.

Sandeep Lamichhane
Lamichhane’s stakes are rising ever since he took the cricket field. In a matter of months, he not only made his debut for the national U-19 team, but was appointed captain of the junior side. He soon made his debut in the senior team as well. Adding one more feather in his cap, the leg-spinner was acquired by Delhi Daredevils to play in the IPL only a few weeks ago. Lamichhane, who went to Namibia as a Nepali player, was however keenly watched by international cricketers as a most-watched IPL player in the tournament. On top of that, he succeeded to bag the title of the player-of-the-tournament.

In the tournament where a participating team hardly gets a time to relax due to matches almost every day for a week, Lamichhane however topped established and experienced associate bowlers to finish on top of the wickets chart. Grabbing five wickets, he set a record of the best bowling figures in a match of this tournament for Nepal. Not only that, he shared two crucial nerve-wracking partnerships for the last wicket with Basant Regmi (against Namibia) and Karan KC (against Canada) to take Nepal to the World Cup qualifiers. “He is hungry and hardworking. Other teams knew he is coming for them and yet he managed to pick wickets,” said Nepal cricket team skipper Paras Khadka after his performance in the Division Two.

Rohit Kumar Paudel
If one successful teenager is a good thing for Nepal, two are better. The lower order dasher was included for the first time in the national squad for the Namibia tour for his boundary-hitting abilities down the order. Nepal needed a finisher at number seven. Paudel, playing his first tournament in the national colors, exhibited plenty of courage and maturity. He made 140 runs in six matches with a strike rate of less than 50 runs per 100 balls. His highest score in the tournament was 47 and those are not great numbers. But those runs came when Nepal needed the most. Especially, his highest score of 47 came in a partnership with Sheikh in the 87-run-partnership which sealed the all important match against Kenya.

Paudel made important contributions in a series of crucial timings. He was restrained from his natural instinct of attacking in previous matches, but when required in the final, he smashed 23 runs off 17 deliveries in partnership with Khadka to boost Nepal’s run rate chasing a target of 278. In his first stint with the national team, Paudel finished the tournament as the second highest run scorer for Nepal after captain Khadka, who topped the run-charts in overall.

Paudel, who played in the same batting position and role for his career so far from the U-19 national team to his domestic franchises, took international cricket like a duck to water in the same role. He was someone who always stayed under the radar, but credits should be given to the management for trusting him to do well for Nepal. His exploits against Mehboob Alam and Dinesh Bhandari in the Everest Premier League (EPL) did help him get some recognition before the Division Two. He already had given a test of his talent against Kamlesh Nagarkoti, the current fast bowling spearhead for the Indian World Cup winning U-19 team. Paudel smashed Nagarkoti for 24 runs (three boundaries and two sixes) in an over during the U-19 Asia Cup held at Sri Lanka in December two years ago.

Aarif Sheikh
The only player to feature in every premier league tournament final (winning two) back home took a long route to make his comeback in the national team after losing his spot after a bad run in previous attempt during 2014-15.

Sheikh was one of the few players to be featured in Division Two in 2015 from the Nepal national team, which was also hosted by Namibia. Three years later, he made small, but solid performances for Nepal to top the tournament’s league stage. The all-rounder’s urgency at the crease picking up singles and doubles was a welcome sight for a Nepali batsman. His 42 runs against Kenya in partnership with Paudel was the style of his cricket when he takes his time to settle down at the crease before going gung ho. The pressure situations and the conditions didn’t give the fans an opportunity to see the aggressive part of his batting, but his willingness to perform under pressure deserves more chances with the national team. He is also a handy seam bowler, with varieties like off-cutters and Yorkers which is yet to be exploited by the national team. He contributed a crucial 26 runs in that once in a lifetime one-wicket win over Canada.

Dilip Nath
The young wicket-keeper had a big shoe to fill vacated by the successful players like Subhash Khakurel and Mahesh Chhetri. He still has a long way to go, but he surely has hinted to be ready for the challenge. He completed three stumpings and took two catches behind the wicket for Nepal in hostile conditions of Namibia, polar apart to the TU cricket ground. That was his first role which he went about decently.

On top of that, he scored a fluent 41 runs at the top of the innings against Canada to set up the foundation for Nepal. The remarkable part of that innings was his contribution despite loss of two senior players Gyanendra Malla and Khadka with him at the other end. He smashed five boundaries in that innings and shared a crucial partnership of 50 runs with Dipendra Singh Airee to steady the ship for Nepal after being hit by two big bumps. The success of Nath is important for Nepal for various reasons. He is a left-handed opening batsman who can keep wickets and is a key to improve right and left-hand batting combination at the top of the order.

On the contrary, it was a disappointing series for Airee which he will like to put behind and concentrate on the qualifiers. Lalit Bhandari didn’t get a single game, but gives an interesting option of left-arm pace for skipper to mix it up if need be. Sah was dismissed for a golden duck in his only game for Nepal in Division Two, but will be looking for more opportunities to prove his mettle going forward.

In a nutshell, the tournament was a recognition for Nepal’s ever increasing talent pool in spite of a lack of the domestic structure and the suspended cricket governing body. Like Khadka said, it is a result of character, team work and hard work by every player involved that Nepali cricket is still surviving and at the same time young guns are rising.

As a central committee member at Bibeksheel Sajha Party, Subuna Basnet, 26, is taking wide strides in politics. She is... Read More...