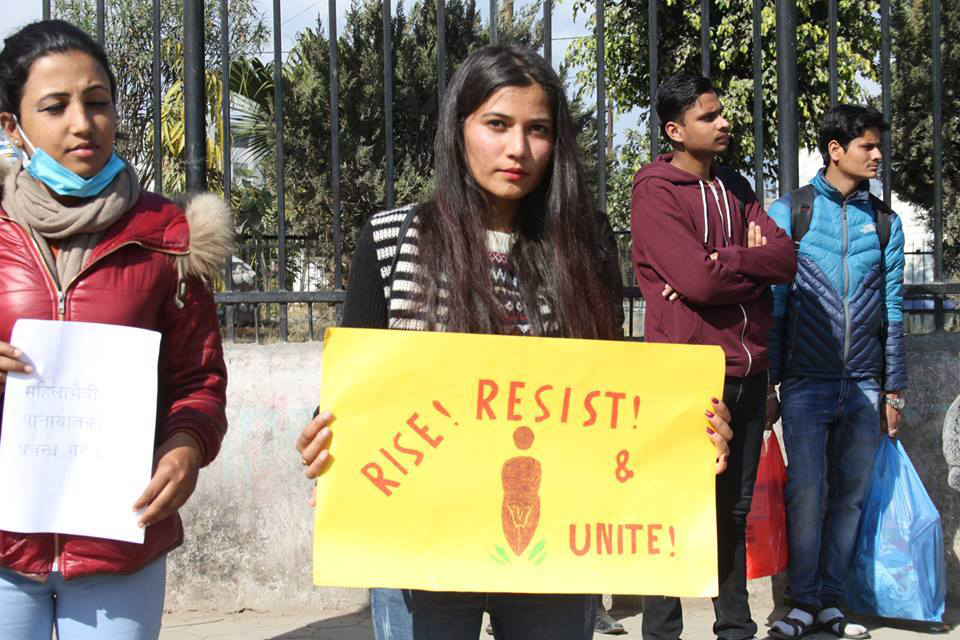 KATHMANDU, Feb 14: Nepali youths organized a demonstration in the capital city on Wednesday as part of 'One Billion Rising Campaign', a worldwide campaign to end violence against women.

Youth Advocacy Nepal (YAN), Mahila Ekata Samaj and Action Aid Nepal organized the demonstration at Shantibatika in Ratnapark where over 100 youths raised their voice against women violence, holding placards with different messages to end women violence and blowing whistle to raise the voice to end violence against women.

"Among 7 billion population of the world, more than one billion women and children are being a victim of domestic violence," said Naren Khatiwada, president of Youth Advocacy Nepal. "The demonstration aims to raise the voice of youths toward end the violence against women and call for the stakeholders including government and civil society to take an action against the violence."

According to the organizers, 'One Billion Rising' is a global mass action to end violence against women. The campaign, launched on Valentine’s Day 2012, began as a call to action based on the staggering statistic that 1 in 3 women on the planet will be beaten or raped during her lifetime, said Khatiwada

LAHAN, Aug 4: Speakers at a programme here have underscored the need of launching special campaign to end dowry which... Read More...

NAWALPARASI, Sept 9: A signature campaign has been launched calling for an end to corruption in the district. ... Read More...

Prices of PCR test revised to Rs 800 in govt hospitals, 1,500 in private hospitals
23 hours ago

Prices of petroleum products hiked
8 hours ago
99 Nepali workers set out for Israel; labor minister, ambassador reach TIA to see them off
7 hours ago

Prior infection, vaccines provide best protection from COVID
4 hours ago

BFIs approves refinance loans of Rs 106.8 billion as of mid-January
15 minutes ago