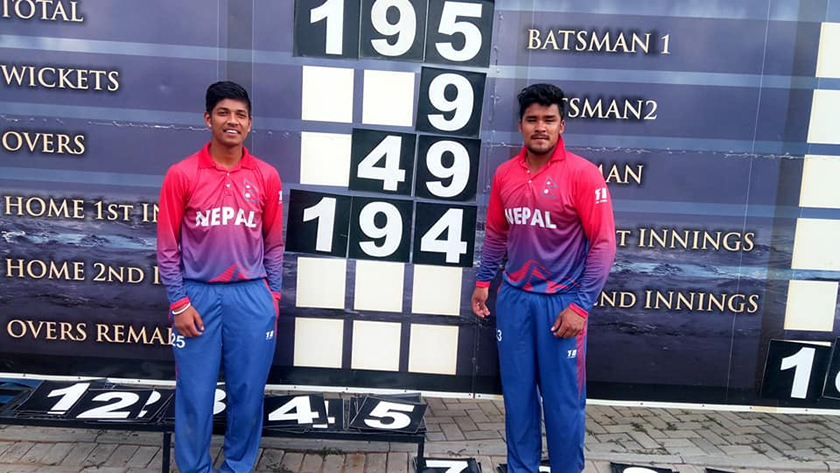 KATHMANDU, Feb 14: Nepal has been qualified for the ICC World Cup 2019 Qualifiers to be held in Zimbabwe next year.  Nepal has defeated Canada by one wicket with zero balls remaining.

In the final match of the ICC World Cricket League Division Two held at Windhoek in Namibia on Wednesday, Nepal met the target of 195 runs set by the Canadian team.

Opener Gyanendra Malla made nine runs whereas captain Paras Khadka returned to the pavilion without scoring a single run. Karan KC came up as a savior to rescue the team to the winning situation scoring highest 42 runs for Nepal including three sixes and four fours off 31 balls. Likewise, Dilip Nath hit 41 runs with five fours of 68 balls. Karan KC has been awarded as Man of the Match.

Earlier, Canada had set Nepal a 195 –run target in their final match. Canada was sent in to bat first after Nepal won the toss; they scored 194 runs in the allotted 50 over, losing eight wickets.

For Nepal Basant Regmi took three wickets conceding 34 runs in 10 overs, Sandeep Lamichhane grabbed two wickets giving away 40 runs in nine overs while Sarad Vesawkar and Karan KC grabbed one wicket each giving away 21 and 33 runs respectively. It was a must-win game for Nepal to qualify for the ICC World Cup 2019 Qualifiers to be held in Zimbabwe.

With this, Nepal has promoted to division one and has qualified for the ICC World Cup 2019 Qualifiers to be held in Zimbabwe next year.

Nepal remains winless in U-19 qualifiers

RSP to make Rabi Lamichhane chairman of the party again
5 hours ago
Two injured as a man tries to self-immolate in Pokhara, woman's condition critical
5 hours ago