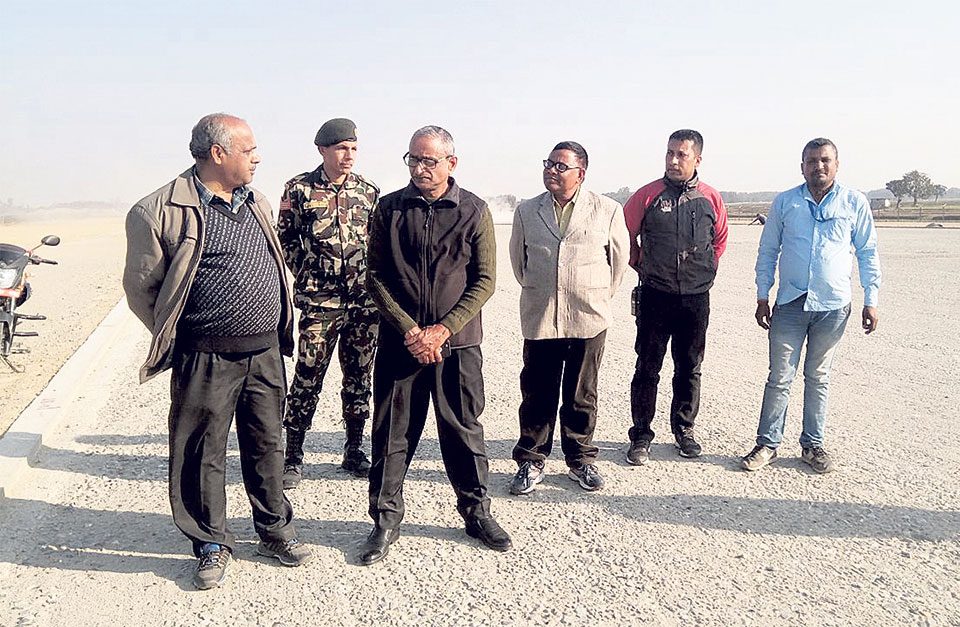 RAJBIRAJ, Feb 11: Minister for Culture, Tourism and Civil Aviation, Jitendra Narayan Dev, has said that the Rajbiraj airport will resume operation from April. Earlier, during a visit to Rajbiraj in his home district Saptari, Dev had committed that the airport would start operation from November.

Talking with media persons during an inspection visit on Friday, Minister Dev said that the delay in airport construction was due to flood, dense fog, and other reasons. “Runway construction is now in the final stage and the renovation of road connection and terminal building are under process,” Dev said.  However, most of the works of the airport are still underway. The terminal building is in a pathetic condition, and the runway blacktopping has not been started yet.

Likewise, fuel center, parking, link road, and other construction works are yet to begin. Furthermore, there are issues with the airport land that does not meet the national criteria. Minister Dev however said that the ministry has already allocated Rs 520 million for land acquisition. Land acquisition process has not been started yet. Blacktopping of the runway and fencing of the land started a year ago. Despite the commitments of contractor company, ministers, and local representatives, 30 percent work is still remaining.

Raman Kanchha Ram Dev and Sayar JV had got the tender for airport construction at Rs 33 million. Earlier in Fiscal Year 2012/13 contractor Kanchha Ram was dragged into controversy for low quality works. Civil Aviation Authority of Nepal (CAAN) had then spent Rs 20 million for runway gravelling and other works. At that time, locals and district leaders had raised objection, claiming irregularity in runway construction.

Rajbiraj airport has halted flight operation since 1995, except for a Tara Air flight that had landed on the airport in 2010.

RATNANAGAR, Chitwan, May 31): Minister for Home Affairs Ram Bahadur Thapa has insisted on launching a sting operation against the... Read More...

Locals elated to see plane at the airfield after a decade ... Read More...

COVID-19 test begins in Surkhet; starting from today in Hetauda from today
3 hours ago

NA plane lands in Brisbane carrying around 260 Australians from Nepal
6 hours ago
More than 8,000 foreign-returnees enter Karnali
6 hours ago