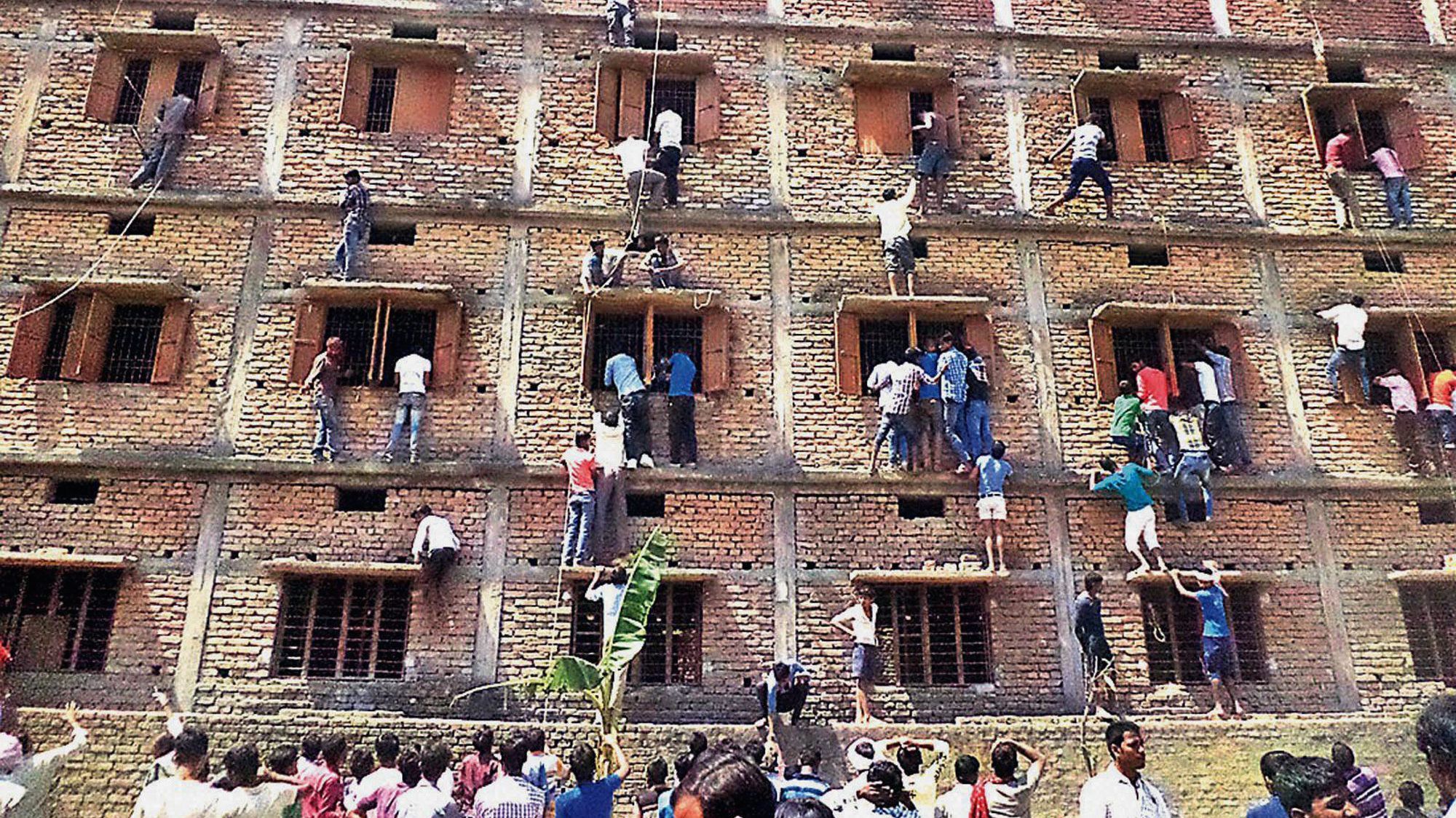 In this March 2014 photo, Indians climb the wall of a building to help out students taking exams in Hajipur, Bihar. (AP Photo/Press Trust of India, File)

NEW DELHI, Feb 10: It’s only the fourth day of annual examinations in India’s largest state of Uttar Pradesh and already the government says 661,643 students — around 10 percent of the total number enrolled — have failed to show up.

A government official said it’s because this year they've upped their anti-cheating efforts, and clamped down on the state’s notorious education mafia by installing CCTV cameras and deploying a police task force to catch the cheaters.

India’s hugely competitive examination system coupled with poor teaching standards in schools has seen the growth of a massive cheating industry in recent decades. Students need top marks — sometimes over 99 percent — to get into the country’s highly oversubscribed universities and so examiners are bribed, answer sheets leaked and exam rooms infiltrated.

No more, said Neena Srivastava, secretary of the Uttar Pradesh board of education, who described the “cheating mafia” as part of organized crime. “We are fighting against this evil. We have to cleanse the state of this menace.”

To curb cheating, Uttar Pradesh’s education minister, Dinesh Sharma toldTimes of India that the government’s new measures this year included clamping down on suspicious exam centers and firing lax district inspectors. Top scorers would have their exam sheets published, he said, so everyone could see how they performed. “In the cheating racket, genuine students are worst sufferers,” he said.

Without the option of cheating, thousands of students are simply not showing up. Others are taking their chances. In one school, a teacher was caught dictating answers to students, despite CCTV cameras being turned on, according to Scroll. In another, Times of India reported, five people including a school principal were arrested for facilitating mass cheating.

India’s rapid development has seen a huge demand for college graduates in the past three decades. Aspiring young Indians hope to rise above their parents’ status and take a portion of the growing pie of wealth in cities. But getting into those colleges requires top scores in state-level exams.

So crucial are school exams to ordinary Indian families, that Prime Minister Narendra Modi even penned a new book released this month called “Exam Warriors” giving young Indians top tips for exam success. Among them are doing yoga, using acronyms as a learning device, and laughing as you enter and leave the exam hall.

But even Modi’s exam mantras can’t surmount the chronic problems of India’s education system. Schools are often understaffed, teachers absent, and curricula is focused on rote learning. In villages, schools sometimes don’t have electricity or the right textbooks. A lack of toilets and running water, especially for menstruating girls, leads to high dropout rates.

Srivastava and others, intent on cleaning up the exam system, said the tough new anti-cheating measures will deter future cheaters. “Children should study. Teachers should give better and timely education. Children should not be enticed into these nefarious activities.”

Homework or kites? Caught in a catch-22 situation

Dashain is already at our doorstep and the festival vibe has taken over the city. Many people have started packing... Read More...

Community School in Bhaktapur attracts too many students

BHAKTAPUR, May 21: While public schools across the nation are being forced to shut down or merge due to unavailability of... Read More...