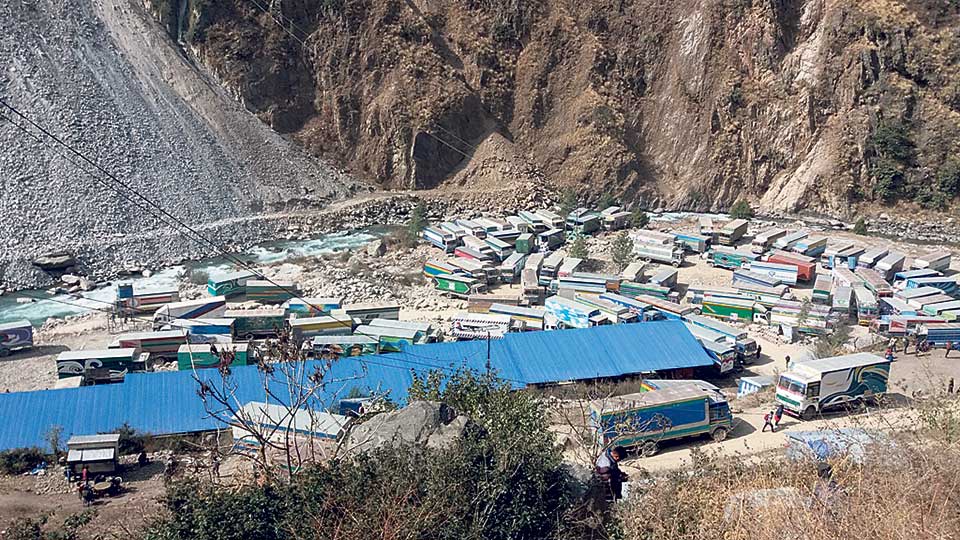 RASUWA, Feb 4: Construction work for Rasuwagadhi dry port at Timure, Rasuwa, is set to kick off within the next four months. The port will be located about two kilometers south of the Rasuwagadhi border between Nepal and China.

After an inspection visit of the project site on Friday, Minister for Commerce Min Bishwakarma said that the construction work would be carried out based on previous agreements with the Chinese side.

With the necessity to construct more infrastructure at the site than previously agreed upon, the negotiations with the Chinese side lengthened causing delay in the commencement of work for the dry port, according to Minister Bishwakarma.“

“The agreement on construction of infrastructure that was initially signed seemed inadequate. Therefore, additional discussions had to be made for additional constructions in the project. This led to a situation where an entirely new agreement had to be prepared and signe”,” he said.

LOCALS SUMBIT MEMO DEMANDING COMPENSATION
Even with the initial designs of the dry port ready, the locals have not received compensation for the three hectares of private land that the government is set to occupy for the project that shall expand over eight hectares of land.

The locals have submitted a memorandum demanding compensation for the 12 houses that must be demolished for this project. However, the government has already distributed the compensation amount to the 25 families whose land was acquired.

Phurpu Dorje Ghale, a local, told Republica that some residents living near the roadside have not been compensated for the acquisition of their houses and sheds.

INITIAL DESIGN OF THE DRY PORT
The preliminary design for the construction of the dry port has been completed and approved. The detailed design for the project is set to be completed within the next three months, as per Laxman Bahadur Basnet, executive director of Nepal Intermodal Transport Development Committee. “

“Within a month of completion of the detailed designing, we will choose the construction company and begin wor”,” he added.

Following the completion of construction work, the Chinese government will rent out the port to the Government of Nepal. The dry port will consist of a main building that would house essential facilities such as customs, quarantine, laboratory, and security forces.

Likewise, the dry port will be featuring a parking space, able to house up to 315 transport trucks at a time along with a storage facility (warehouse) spread over an area of 750 square meters.

KATHMANDU, May 21: Nepal’s export to China via Rasuwagadhi customs jumped by nearly two and half times over the first nine... Read More...