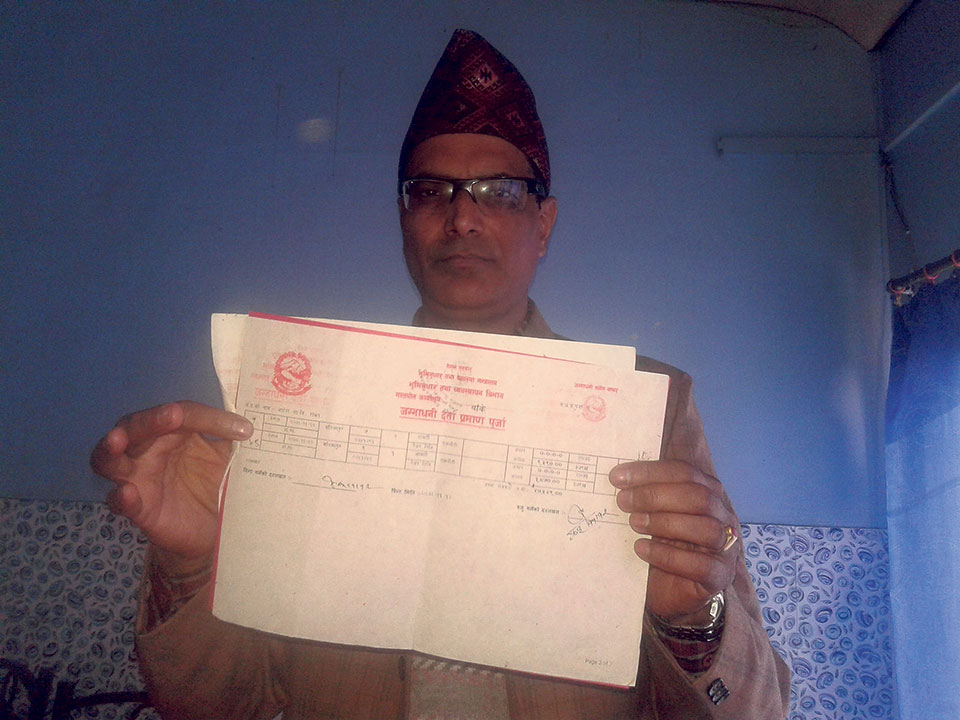 NEPALGUNJ, Feb 3: In lack of cooperation from the local police and administration,  Adarsha Higher Secondary School  at Ranjha has not been able to use its own land as it has been encroached by squatters since years back. For more than two decades squatters have held sway over the school land.

Local social worker Rammilan Verma  provided the land to the school in 1960. Taking  advantage of the Maoist insurrection, squatters illegally occupied the area and have been living there ever since . As per the previous land revenue documents, the school has 9 bigha 18 kattha and 5 dhur of land. However,  the new particuars show that it has only 7 bigha,7 kattha and 1 dhur. The squatters have encroached 3 out of the 5 plots. Around 3 bigha, 7 kattha and 14 dhur in plot 1 located in what was  then ManikapurVDC -7 is under the grip of the squatters. The school has been  able to use only 4 kattha.

Similarly, 11 kattha and 16 dhur in plot 49 in Manikapur-9   and 1 bigha and 7 kattha in plot 45 have been encroached by the squatters, informed Prakash Acharya, principal of the school. Two years ago, about 71 squatter families were living on the land. The number has now jumped to 82 , according to Acharya. "We have time and again held discussions with the responsible individuals regarding the encroachment. However, nothing has been done," he said.

The school  had urged the  authorities to withhold various amenities from the squatters. But the National Electricity Authority (NEA) has provided them  electricity. "Our efforts to evacuate our own land have drawn criticism from the locals also. We often receive threats," said Acharya.

Although they are aware about the encroachment, no government authority or political party has  helped the school reclaim its land, laments Jaya Prakash Verma, grandson of the land donor, who is also chairperson of the school management committee.

After much deliberation, the District Education Office provided the school funds for the construction of a new building. The building has been constructed but the squatters are not willing to vacate the place. "As the squatters have remained put, our plans to build a multiple campus have not materialised," said Verma.  In fact, squatters are time and again posing obstructions in various developmental works of the school.

It is the responsibility of the ward to protect public and government lands. Earlier, Ward No.20 of the sub-metropolis had published a 45 day notice urging the squatters to vacate the land. But the squatters haven't budged . "We had published a notice a while ago but the squatters ignored that too," said Krishna Karki, chairperson of Ward No. 20. Karki accused police and Mayor  Dhawal Shumsher Rana of remaining mum over the issue. Not just that, Karki disclosed that only 32 to 35 of the families living on the school land are genuine squatters. The rest are  well off families who own land and property.

Meanwhile, Shiva Lal Sharma, chairperson of the community action committee formed by the squatters claims that the land they are using does not belong to the school. "We have been living here since 1996. The school cannot claim  ownership. We demand an investigation," he said .